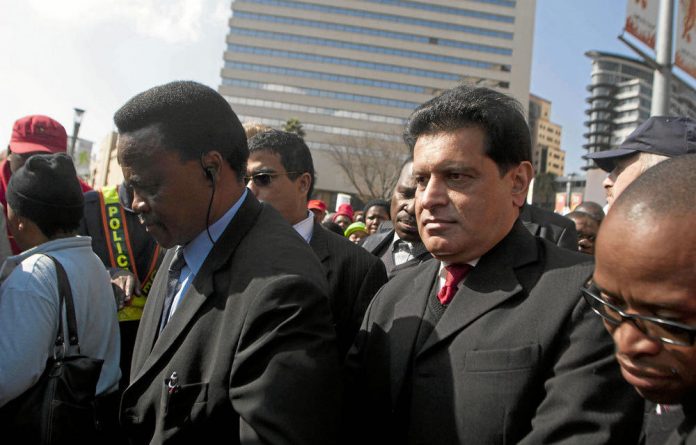 New evidence has emerged suggesting controversial liquidator Enver Motala was playing a double game during his stewardship of the disastrous liquidation of the Pamodzi Group of companies.

AmaBhungane has seen confirmation that Motala became a shareholder of JSE-listed Labat Africa in February 2010 – at the same time he gave his support to a merger between Labat and the politically connected Aurora Empowerment Systems. Labat is small stock, whose main asset was a microelectronics plant.

The merger was presented as a way to rescue Aurora’s protracted bid to take over two Pamodzi gold mines, but Motala positioned himself to take personal advantage of the deal by obtaining more than 1.3-million shares in Labat.

Labat is an investment operating group, which at the time was involved in communications and information systems. Its two main businesses were related to traffic control technology and the manufacturing of integrated circuits or chips.

The evidence has emerged as Motala fights to be reappointed to the panel of liquidators by the master of the Pretoria high court. He was removed from the panel by the deputy master in 2011.

In late 2009 a liquidation team led by Motala identified Aurora as the preferred bidder to acquire and operate Pamodzi’s bankrupt Grootvlei and Orkney gold mines.

But Aurora failed to secure the necessary funding to pay for the mines – and the plan to list on the stock exchange through Labat was presented as a way of raising the cash.

Letter confirms Motala’s shareholding
Now a letter seen by amaBhungane, signed by Labat’s company secretary, shows that Motala became a shareholder of Labat in February 2010. This was at the same time as Labat announced a deal in which Aurora would buy a controlling stake in the listed company for R4.5-million. Aurora was going to use Labat as a vehicle to list on the JSE, as a way to raise capital to fund the Pamodzi transaction.

It was also in August 2010 that Motala’s holding in Labat increased to over 1.3-million shares from his initial February holding of just over 960 000 shares. By then his shares were worth over R1-million.

Motala, who still holds the shares, told amaBhungane two weeks ago that he had had his shares in Labat “for a long time” although he could not remember exactly when he purchased them. He denied there was any conflict of interest.

He told amaBhungane that the joint liquidators did not know Aurora was going to use Labat to list on the JSE: “Only in the end they [Aurora] advised us they are going to reverse list into Labat. But by then I already had my Labat shares, from a long time ago. There is no story there, I can tell you that.

“I don’t have many shares, just a small portion. There is nothing there,” Motala said.

The official public announcement about the Aurora-Labat deal was made as early as February 4 2010 – the same month Motala obtained his first shares.

AmaBhungane was not able to establish exactly on what date in February Motala’s share transfer took place, but Labat issued cautionary announcements about the tie-up even earlier, in January 2010, though without naming Aurora as the other party.

Conflict of interest
Motala’s conflict of interest was more than theoretical: as lead liquidator he was allegedly influential in supporting the Aurora bid to retain possession of the Pamodzi assets, which it had not paid for, but was exploiting – allegedly for the benefit of Aurora and various of its directors and associates, notably the Bhana family.

Evidence emerged later that the Bhanas derived substantial benefits from consulting and high-interest loans to Aurora.

Evidence has previously emerged of another conflict involving Motala and Aurora.

An inquiry ordered by the master of the High Court in 2011 into the Pamodzi debacle revealed Motala had personally extended a R3-million loan to Aurora – also in early February 2010. It was this conflict that, among other concerns, led to Motala’s removal from the roll of liquidators in September 2011.

In her letter informing him of his removal, deputy master Christine Rossouw noted: “One of the most important matters that the master wished to investigate in Pamodzi was why the liquidators persisted in affording extensions of time to Aurora to come up with funds, which it appears they had no prospect of doing … Unknown to the master, and apparently your co-liquidators, while Aurora was obtaining the extensions aforesaid, you, in your version, were both making loans to and receiving payments from Aurora.”

Motala, who unlike many other creditors was repaid, has previously defended his loan. In 2011 he told the M&G: “Aurora was being crucified in the press for not paying its workers … I said I’d lend them money in sympathy with the unions … I should be given a medal for giving Aurora that loan from my own company.”

Motala has launched a court challenge to the legitimacy and fairness of the master’s inquiry and his removal from the panel of liquidators.

The sting of Motala’s conflict of interest over Aurora and Labat is heightened by the prevailing crisis at that time: Aurora had failed to pay mineworkers for months, which led to a general strike. Operations at both mines came to a standstill at the end of March 2010.

Motala cashes in
Between February and May 3 2010 – when Motala was being repaid his R3-million – Aurora retrenched mineworkers, trade unions called a general strike and the mines shut down. So a deal worth R725-million, announced in April 2010 – shortly after the Labat merger – with Swiss-based “alternative investment” group Global Emerging Markets (GEM), was a possible lifeline for Aurora.

The clincher, however, was that GEM’s funding “was conditional” on Aurora’s JSE-listing via Labat.

Aurora had to have a controlling stake in Labat before GEM would release any funds – and the value of Labat’s shares would determine how much of the money Aurora could draw on.

In other words, it seemed that if the Aurora-Labat merger went as planned the money would flow and the whole Pamodzi gold mining project would take off – and with it, the Labat share price.

AmaBhungane has established that another entity closely connected to the Aurora-Labat deal also obtained shares in Labat.

At the time the main barrier to the successful consummation of a seemingly lucrative merger was the JSE requirement that Aurora was obliged to make an offer to minority shareholders in Labat as well as the majority shareholder.

On March 15 2010 Amod Attorneys addressed a letter to the securities regulator of the JSE, on behalf of Aurora, certifying that it retained in its trust account sufficient funds to make payment in respect of the shares of the minority shareholders.

According to electronic records, between September and December that year Amod Attorneys bought more than six million shares in Labat.

But by the end of January 2011, the takeover was off the table and so was funding from GEM.

According to evidence that later emerged from the master’s inquiry, the letter from Amod Attorneys was allegedly fraudulent in that Amod did not retain in its trust account at the time the amount certified.Charges have been laid and an investigation is also under way.

Attorney Ahmed Amod told amaBhungane: “The matter is sub judice and I have no comment.”

By August 2011 Motala had been removed as a liquidator in the Pamodzi matter by the master.

Call for action against Khulubuse Zuma after #PanamaLeaks revelation