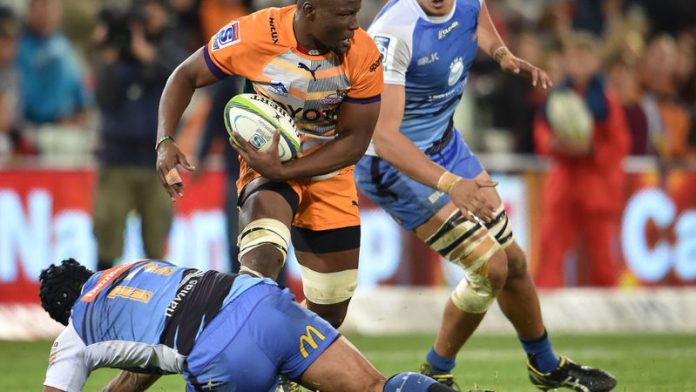 South Africa’s Coastal Sharks cling to a one-point lead in Super Rugby after going down to title rivals ACT Brumbies this weekend with the defending champions Waikato Chiefs closing in.

Former World Cup-winning Springbok coach Jake White had a losing return to Canberra as the Brumbies ground out a 16-9 win to tighten up the race between the three national conference leaders.

The Durban-based Sharks lead the Chiefs by a single point after the Waikato side registered a gritty bonus-point 32-20 win over the Auckland Blues in New Plymouth.

The Brumbies are third overall, two points adrift of the Sharks, but are only three points ahead of Western Force in the Australian conference.

The Force made it seven wins from their last eight games in downing the Central Cheetahs 23-16 in Bloemfontein for their first win in South Africa since 2011.

The Wellington Hurricanes and Otago Highlanders are fifth and sixth respectively overall after weekend wins.

The Hurricanes had a hard-fought 25-15 win over the Rebels in Melbourne, while the Highlanders escaped with the narrowest of victories to put their season back on track with a 23-22 victory over the Golden Lions in Dunedin.

Seven-time Super Rugby champions Canterbury Crusaders get the chance to return to the top six with a victory over the troubled Queensland Reds in Brisbane later on Sunday.

In the weekend’s other match, the Northern Bulls had a come-from-behind 28-12 win over fellow South Africans Western Stormers in Pretoria.

It was a grim affair in Canberra where the Brumbies scored the only try against the Sharks in wet conditions with an over-emphasis on field kicking from both sides.

Lock Sam Carter surged through a hole in the Sharks defence off a short pass from scrum-half Nic White to dot down in the 63rd minute.

The Durban team’s chances were not helped by an off night from their Springbok goalkicker Frans Steyn, who missed three penalty attempts and was generally astray with his boot.

The South African quit after steering the Brumbies to last year’s Super 15 final, halfway through a four-year contract.

The Sharks’ losing bonus point kept them at the top of the standings.

The Chiefs restored their title credentials against the Blues, scoring four tries to two, including a brace for prop Ben Tameifuna.

After a run of poor results, Chiefs captain Liam Messam said the victory — built on last week’s win over the Lions — was a welcome confidence boost as the team seek a third consecutive Super 15 title.

The playmaker, who moved to Perth in Western Australia after failing to hold a regular starting place at the South African franchise, potted two conversions and three penalties from five shots at goal.

The result completed a dismal weekend for South African sides against Australasian opponents.

Beauden Barrett kicked the Hurricanes to a labouring win over the Rebels, who scored two tries to one. Barrett’s six penalties and a conversion for 20 points proved the difference.

In Dunedin, the Highlanders led 23-0 at half-time but failed to score a point in the second half as the Lions roared back with the outcome hinging on a conversion attempt by replacement fly-half Elton Jantjies after the final whistle.

The ball hit the posts and bounced back into the field of play.

Handre Pollard kicked 20 points to clinch victory for the Bulls after the Stormers, bottom of the southern hemisphere provincial championship, had a 12-point lead after 20 minutes.

The New South Wales Waratahs had a bye this weekend. – AFP

Minister of Home Affairs Aaron Motsoaledi has defended the new amendments to the Refugees Act that came into effect at the...
Read more
Advertisting
Continue to the category
National