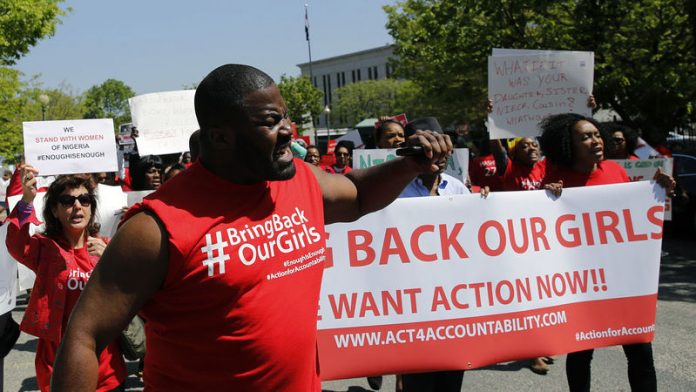 United States surveillance aircraft have been flying over remote areas of north-east Nigeria as part of an international hunt for the more than 200 schoolgirls kidnapped a month ago by Boko Haram militants.

Thousands of Nigerian troops have been sent to the region, while the US and Britain also have teams on the ground to help with the search.

The mass abduction of the girls from their boarding school in Chibok has caused international outrage and Nigerian President Goodluck Jonathan’s government has faced criticism from parents and others for its slow response to the kidnapping.

It has brought global publicity to Boko Haram, which has killed thousands of Nigerians since it took up arms in 2009 to fight for an Islamist state.

The group initially threatened to sell the girls into slavery but on Monday offered to trade them for detained militants.

Satellite search
The US state department said Washington had sent military, law enforcement and development experts to Nigeria to help search for the missing girls.

“We have shared commercial satellite imagery with the Nigerians and are flying manned ISR [intelligence, surveillance and reconnaissance] assets over Nigeria with the government’s permission,” a US official said.

US state department spokesperson Jen Psaki said US teams on the ground “are digging in on the search and co-ordinating closely with the Nigerian government as well as international partners and allies”.

The girls’ exact whereabouts and whether they are being held in one or more groups is not known. Chibok is close to Nigeria’s border with Cameroon, Niger and Chad in a sparsely populated area of the Sahel region.

Boko Haram leader Abubakar Shekau posted a video on Monday offering to release the girls in exchange for prisoners held by the government – the first visual evidence of them in captivity. The government  rejected Shekau’s conditions of release.

Video evidence
The video showed more than 110 girls sitting on the ground in a rural location, chanting, singing and wearing veils. It was not clear when it was filmed or whether Shekau, who sat in front of a green backdrop holding an AK-47 during part of the video, was in the same location as the girls.

The mother of one of the girls said she had watched the video on television on Monday evening and spotted her daughter among the girls sitting on the ground, said Dumoma Mpur, the parent-teacher association chairperson at Government Girls Secondary School in Chibok.

“The video got parents apprehensive again after watching it, but the various steps taken by the governments and the coming of the foreign troops is boosting our spirits,” said Mpur.

Mpur said he had yet to see a soldier involved in the hunt in Chibok, although that he had seen what appeared to be a surveillance jet and two helicopters flying over the area.

Rebel ambush
A Nigerian soldier with an artillery unit said that over the weekend rebels ambushed his unit in the Sambisa forest, which is a Boko Haram stronghold, using mines and rocket-propelled grenades.

They killed eight soldiers and wounded four more, said the soldier, who spoke by telephone on condition of anonymity. There was no immediate response from Nigerian defence headquarters.

Media outlet Al Jazeera visited the village from which the girls were kidnapped, where parents told reporter Ahmed Idris that the president had abandoned them and that they were outraged at suggestions by Jonathan’s wife that the abduction never happened. Ahmed also interviewed one of the girls who had escaped from Boko Haram.

Jonathan was due to return to Abuja on Tuesday from the Republic of Congo, where he held talks with President Denis Sassou Nguesso before a regional security summit in Paris on Saturday to discuss Boko Haram. – Reuters, additional reporting by Lesley Wroughton in Washington and Staff Reporter