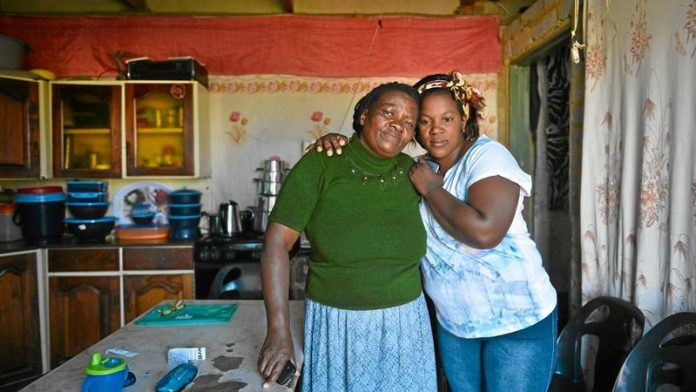 Despite pervasive hunger and heightened tensions in the platinum belt as a result of a four-month long strike, going back to work is simply not an option – at least not if the people living there have anything to do with it.

“Then we have been suffering for nothing and dying for nothing,” says Primrose Sonti, a community leader in the Wonderkop settlement in Marikana.

“No mineworker will go back to work without getting that R12 500,” she slaps the kitchen table with each word that leaves her mouth. Asked how she might survive until then, she says: “We will go slowly, slowly, until God replies.”

Wendy Pretorius is a mother of two and lives in Wonderkop with her father, a striking Lonmin employee. She has not had a thing to eat all day but remains in favour of the strike.

“I support my father 100%. I don’t want him to go back. If the community and the workers decided to strike he must support them. He is part of the workers, he must do what they are doing,” she says.

Living on donations
The people living around the platinum mines in North West province are surviving on donations from friends and family and sheer resourcefulness. With no money for paraffin, residents collect wood in the bush for cooking and keeping warm as the bitter winter cold sets in. Women also gather wild spinach in the veld to supplement their diets.

“My neighbour is collecting tins, the old tins, and collecting bottles to sell, and then she can have something to eat,” says Sonti, who supports six others. “I am better off than her because I have houses at the back and I can get rent. Never mind I can’t get rent now.”

Sonti, who is going to be an MP for the Economic Freedom Fighters, is also part of a committee that helps to identify the hardest hit in the community in order to allocate donations generated from a project initiated by master’s students at the University of Johannesburg.

The first batch of food parcels, dropped at the campus in Johannesburg and taken up to Rustenburg, was enough to allocate to 40 families but “there were more than 100 at the gate of that church, where that food was dropped,” Sonti said. “It was very, very bad. I think if it hadn’t been inside the church maybe a fight … ” she trails off. “But fortunately the church is a respected place.”

She hopes that something will give soon. “The people in this world are looking at this situation. They are not mad. They will do something.”

On May 13 the community gathered at the koppie where 34 protesters were killed by police in 2012.

They burned down local shop stalls and marched through the area with traditional weapons as a warning to those who might dare to respond to Lonmin’s call for employees to return to work. In fact the company reported “a very small” number of workers turned up.

Association of Mineworkers and Construction Union president Joseph Mathunjwa told the Mail & Guardian this week that people had the right to go to work but that he could not be expected to wield any control over the community.

A few days before this, a number of attacks and murders in the area were linked to the strike.

At the picketing areas such as Anglo American Platinum’s Khuseleka shaft some non-striking employees reported for work and entered and exited the gates undeterred by nearby picketers in Amcu shirts. “They are our brothers and sisters. We play cards with them after their shift,” said chairperson of the shaft committee Oscar Dokolwana. “Our strike is peaceful.”

Lost work days
According to the affected employers [Lonmin, Anglo Platinum and Impala Platinum], a third of the year’s total production days have been lost since the strike began on January 23.

“While the revenue lost to the company can be ‘clawed back’ to some extent over time, because the ore remains unmined, the companies have lost the sunk costs associated with running the operations without any production,” employers told the M&G. “Employees, however, will not make up the earnings that they have lost for many years.”

Platinum has been the only mining sector in which jobs have largely been increasing or have been sustained. But “many contracting companies have gone out of business and restructuring is only likely to occur after the strike is resolved”, the companies said. “The actual impact will only be clear once the strike ends and operations resume.”