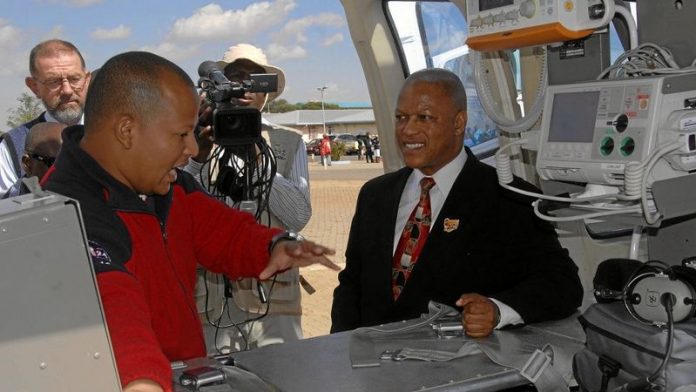 Tough luck for the people of North West province who might have a medical emergency. The province’s health MEC, Magome Masike, has used money meant for buying ambulances to purchase another R1-million Mercedes-Benz SUV, his second within three years.

His officials say it’s “normal practice” to shift funds around to buy the MEC a luxury vehicle.

The waBenzi did so against the advice of senior provincial officials, who cautioned him to wait until after the elections to buy the Mercedes-Benz ML500, currently costing R938 828 and boasting the payoff line “Show you have nothing left to prove” on the carmaker’s website. But his own officials justified the purchase two months ago as being “allowed by the ministerial handbook”.

North West health department spokesperson Tebogo Lekgethwane at first denied that ambulance funds were used to buy the MEC’s car, but later admitted that, “indeed, the budget used to procure the car was from the cost centre indicated, due to the fact that those cost centres are classified as vehicles. It is normal practice in government to shift funds across various cost centres and to be journaled [sic] and replaced later.”

All the extras
Masike’s “obsidian black” vehicle comes fitted with an extra step to make it easier for the MEC to get into the SUV. Other additional features include privacy glass fitted between the driver’s and backseat sections and a cellphone hands-free kit.

Masike heads the department that famously bought R7-million worth of baby milk formula, failed to distribute it for three years and then spent almost R2-million to destroy the expired milk.

This was the second car bought for Masike within three years, and the third bought for use by the province’s health MEC in this government’s five-year term.

Before the latest vehicle, Masike was also driven around in a Mercedes-Benz GL500, currently costing R1.1-million. When he became an MEC through a provincial Cabinet reshuffle in December 2010, his predecessor, Rebecca Kasienyane, was using a six-month-old BMW X5, which Masike refused to use, said departmental sources.

Lekgethwane said the BMW X5 “was retained by the department of public works”.

New vehicle procurement
Lekgethwane told the M&G that the “facts” in the department’s possession “support the need and decision taken to procure a new vehicle for the MEC and was done within the applicable regulations”.

But the M&G has seen email communication in which the North West health department’s acting head, Andrew Kyereh, states that provincial transport officer Peter Mosiane advised against buying a new car until a new term of government started.

Kyereh had been advised by Mosiane to persuade Masike to wait for his new car until after elections, but “before I could relay the message, the MEC [Masike] came back to me again, complaining that the car has already started spending a lot of time at the maintenance garage.

“The honourable MEC prefers an obsidian-black Mercedes-Benz ML500,” read one of Kyereh’s emails. He added: “[Masike] has indicated that he wants the same vehicle as the current one, the only modification he is asking for is that an additional step be put [in] for ease of climbing into the vehicle.”

Lekgethwane said “most of the gadgets paid for as extras come as standard with the current models of ML cars”.

“Apart from an additional step for ease of alighting from the car, the MEC did not ask for any additional feature that was not part of the old vehicle,” he said.

No tender
The department did not issue a tender for buying this car, despite a directive by Finance Minister Pravin Gordhan last year that any purchase above R500 000 should go out on tender. Lekgethwane blamed the public works department for this.

Health department sources said it is appalling that Masike, a medical doctor by profession, prioritised driving in a luxury car when the province’s health services are not acceptable.

A senior provincial government source said this money was meant for buying “ambulances, mobile clinics and forensic pathologists’ cars. Strictly those cars, nothing else.”

Masike’s car was delivered three months after the province’s premier, Thandi Modise, got the taxpayer to buy her a R1.3-million 750i BMW. Both cars were bought despite austerity measures announced by Gordhan.

Nothing improper
When she was a guest at the New Age‘s business breakfast briefing in February, Modise said there was nothing improper in the purchase of the luxury car.

She questioned why the same accusations were not levelled against her Mpumalanga counterpart, David Mabuza, when he purchased vehicles totalling R5-million.

“But even then, the department took into account cost-saving and that is why the department decided to move down from the “GL’ model [costing R1.1-million] to the less expensive “ML’ model [R938 828].”

Ambulance deficit
The national norms for ambulance response time is 15 minutes in urban areas and 45 minutes in rural areas, but North West is struggling to meet that. “It is performing badly,” said a health department source.

“Most of the ambulances do not have the necessary equipment, the staff is not well paid and they struggle with necessities like uniforms. Despite all the problems … [Masike] has shifted the much-needed funds to travel in style and luxury.”

It is not clear whether Masike will return to the health MEC position when the ANC announces the new provincial Cabinets. If he does not, he would have spent R1-million on a car that he used for just over two months.