On the train track for a trip down memory lane 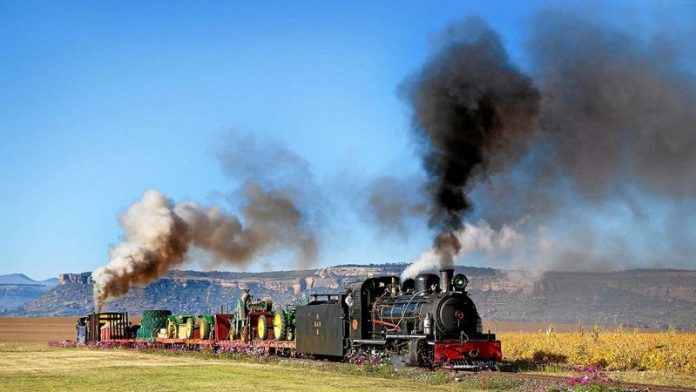 Every year at Easter, on a farm spanning 6 000 hectares above the Caledon River in the eastern Free State, a uniquely odd and captivating festival occurs. Called Stars of Sandstone, the festival features working machinery of every age and every conceivable shape and design.

There is no steam tractor too obscure or narrow-gauge locomotive too rare for the leading lights of Sandstone, Wilf Mole and Mike Myers, not to have made inquiries about or be in the process of restoring.

“We had a situation recently in Krugersdorp where we’d heard of a railway museum going bust,” says Mole. “We found that there were 16 heavily armed guys cutting up locomotives for scrap and we went in with a security company and 25 heavily armed guys to rescue things.”

Sandstone’s acquisitions policy is not usually so gung-ho. Sometimes machinery is donated, sometimes they pick it up at auctions and sometimes it comes from mines or citrus estates, rusty and decrepit. Much of the Sandstone track is unwanted surplus from the Highlands Water Project in Lesotho.

When asked whether there were locomotives on offer, Mole replies: “Yes there were, but they were ugly, of French design and electrified. They used to scuttle through the tunnels. They weren’t for us.”

Then there’s the story of a loco on a Mozambican sugar estate being hauled out of the bush and transported by barge down the Zambezi before finding its way by coaster from Beira to Durban. Once there, it was hauled by flatbed truck up from sea level and now it stands with Garretts, Hunslet-Taylors and Kerr Stuart locomotives on the Sandstone Estate.

“One of the stars of the show this weekend are the Lawleys,” says Mole, his voice changing in pitch ever so slightly. “These locomotives pre-date the birth of Rhodesia and were used on the Umtali-Beira route. It was treacherous terrain and dangerous work, what with malaria and swamp fever. Man-eating lions were on the prowl at some of the watering stops.

“Cecil John Rhodes knew that the life expectancy of the indentured Indian labourers who built the line was three weeks, so he used to order another transport ship out of Goa before the most recent one had docked in Beira. That’s colonial cynicism for you.”

It is easy to forget a locomotive’s history when watching the steady grace with which they haul their carriages and consorts down nearly 26km of Sandstone’s immaculately laid-out narrow-gauge track, curling, as it does, through fields of cosmos and drooping sunflowers. It is this, perhaps, that has made locomotive restoration and railway heritage in general in this country such a politically fraught enterprise.

No friend of Transnet
Mole is no friend of Transnet or of the provincial government apparatchiks who occasionally come sniffing round the farm, accusing them of obstructionism and lack of vision. Indeed, where others see marginal lines in need of closure or apartheid-era heritage of which they instinctively disapprove, Mole sees only opportunity.

“The Bloemfontein-Bethlehem line [part of which abuts the Sandstone Estate and runs up the arm of Lesotho through the beautiful eastern Free State] here on our doorstep was voted among the three most ­scenic routes in the world, yet Transnet have closed it down. It’s a tourist gold mine.

“Exactly the same applies to the Apple Express [from Port Elizabeth to Avontuur]. That’s 300km of some of the most well-known narrow-gauge railway in the world. At the moment people are bickering about washaways and who pays for things to be repaired. Get me down there with six of my guys and we could do the job in weeks.”

The Bloem to Bethlehem line is an interesting case study because it represents a South African history lesson in miniature. Starting in Bloemfontein, it ends 303km later in Bethlehem, traversing the ­gently rolling sandstone country occupied by the farm itself. Moving east of Bloem it takes in Sannaspos and Likhatlong before passing through the tiny stations of Westminster and Marseilles.

In the approach to Clocolan, we find Eerstekamp and, on the other side of it, Gumtree; Ficksburg is flanked by Qwanty and Sekonyela and some way before Bethlehem itself there is the almost mandatory Kommandonek. The station names reveal that this landscape has been marched across and fought over. There have been cattle raids and cross-Caledon sorties, skirmishes and pitched battles. There are crumbling Anglo-Boer War lookout towers still on the farm, and although imperial influence still stains the land, the names of the stations evoke the grit of the Boers and the wily endurance of local tribes, particularly the Basotho on the other side of the Caledon.

Independent worlds
At a station called Vailima, on the outer loop of the Sandstone Estate farm, the narrow-gauge railway and the Bloem to Bethlehem line meet, a sort of hasty brush between narrow and standard gauge, public and private. It rather suggests the transitory coming together of two related but independent worlds: the neglected line rolling through some of the most beautiful countryside in the land and the train spotters’ and railway enthusiasts’ wet dream.

Stars of Sandstone had to close bookings on the first Saturday of the event earlier last month and, although the festival was on a small scale, with hundreds rather than thousands of visitors and day-trippers, it will rake in over R600 000 this year. Because of a different approach in their marketing, this year’s event didn’t only attract grease monkeys and breezy Dutch engine drivers, but also more women and children than ever before.

One of the real joys of Sandstone is that the steam engines, old tractors and locomotives are integrated into a working farm, with its silos and workshops and massive, War of the Worlds-like combine harvesters.

Autumn is time for sunflower, sugar bean and soya bean harvesting, and the farm is lively with the midnight growl of the combines (the beans must be harvested when the moisture content is just right) and, in the early morning, the vaguely irritating, vaguely soothing noise of shunting.

Great adventure
It’s a great adventure for children and a wonderful experience for the slightly older child in adults. Steam is soothing, riding old steam trains is gorgeously romantic and driving old Chevy trucks down dirt tracks is just plain fun. It’s a pity that the Sandstone audience isn’t representative of South Africa at large. Still, the estate is a remarkable jewel in a pocket of the country that will forever give the impression of stoic, slightly faded, endurance.

The back end of the farming operation – contracts, payments, storage and planning – is provided by Myers, long-time business partner and gently effective foil for the more naturally barnstorming Mole.

“Farming in this country is under the cosh to the co-operatives,” says Myers even-handedly. “We don’t have any debt and we have storage facilities here on the farm so we can enter the market at our discretion. Fifty percent of our profit is timing, not production.”

Such savvy – and the fact that they both became rich through the local Nokia franchise – is in part what has allowed the two of them to create a working heritage environment that has no equal anywhere else in the country.

As well as trains and automobiles there were planes at Sandstone over Easter – the main attraction being a chunky old Harvard in all its glory.

National heritage treasures
The American trainers, many of which are based at Swartkops outside of Pretoria nowadays, are national heritage treasures, which means they can’t be sold or taken outside the country. In the same way that we instinctively look to the sky when we hear the low growl of their Pratt & Whitney engines, realising that the planes are part of the fabric of local life, so should Sandstone be afforded similar status. It is an unusually rich world that stands out in the heritage tapestry of this country.

The Sandstone estate and Stars of Sandstone also tell us something about their creators and the rich cast of mechanics, farm managers and casuals who keep both the farm and the collection running smoothly.

Mole tells the story of being a “wine waiter” at the Balalaika Hotel in Sandton as a student more than 40 years ago and, after knocking off from his shift one Friday night, finding himself at a roadhouse on Louis Botha Avenue. He and a mate were driving an MG and made a bet with the driver of an Aston Martin that they were driving a better car so, there and then, challenged him to a race down to Durban. The two cars arrived on the Durban beach front at roughly the same time, six or seven hours later.

Relieved and exhausted, Mole phoned his mother to tell her where he was and she suggested briskly he needn’t have bothered. “She naturally assumed that everything was fine,” said Mole. “It was a different time.”

Women train drivers are under attack