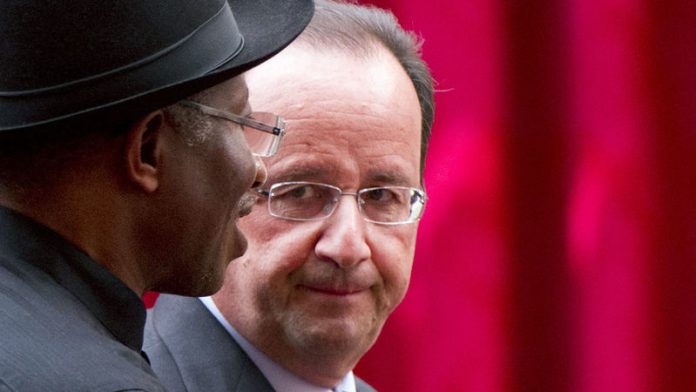 Boko Haram has ample funds, highly sophisticated weaponry and advanced training with some of the world’s most experienced terrorists, the French president said on Saturday as he and African leaders grappled with how to combat the Islamic extremist group whose reach extends to five countries.

At the summit in Paris intended to hammer out a plan to find and rescue  more than 200 schoolgirls being held hostage by Boko Haram, intelligence officials from the US, Europe and Africa shared information while heads of state and top diplomats tackled policy.

Hours after yet another attack in a Boko Haram stronghold – this time in Cameroon near the border with Nigeria – the leaders agreed to improve the policing of frontiers, share intelligence and trace the weapons and cash that are the group’s lifeblood.

“This group is armed, with heavy weapons of an unimaginable sophistication and the ability to use them,” said French President Francois Hollande.

He said the weapons came from chaotic Libya and the training took place in Mali before the ouster of its al-Qaida linked Islamist leaders. As for the money, Hollande said its origins were murky.

“Boko Haram is acting clearly as an al-Qaida operation,” said Nigerian President Goodluck Jonathan, who had only reluctantly accepted outside help after years of insisting the group was a local problem.

Increased involvement
Cameroon, which French officials said had treated Boko Haram until recently as an issue involving only Nigeria, has become increasingly involved. The attack on a Chinese engineering firm’s camp late on Friday left at least 10 people missing and one person dead.

The camp was in the same nearly trackless parkland where the girls were first spirited away after an attack on their school in northern Nigeria, highlighting Boko Haram’s ability to cross borders unimpeded.

Hollande said the effort to find them and ultimately combat Boko Haram will involve sharing intelligence, protecting borders and quick action in a crisis. A French official, speaking on condition of anonymity as it was sensitive information, said an intelligence cell involving French, British and US agents was already operating out of Nigeria.

Hollande emphasised that Boko Haram had clearly established ties with other terror groups in Africa, making it a concern throughout the continent and beyond.

Boko Haram has offered to exchange the 276 girls who remain captive for jailed insurgents and threatened otherwise to sell them into slavery.

“Boko Haram’s strategy, contrary to all civilisation, is to destabilise Nigeria and to destroy the fundamental principles of human dignity,” Hollande said during the working lunch. “More than 200 young girls threatened with slavery is the proof.”

Jonathan on Friday cancelled a trip to the town where the girls were seized, apparently because of security concerns.

Signs are growing that some Nigerian troops are near mutiny, saying that they are overwhelmed and outgunned by Boko Haram. Soldiers have told news agency the Associated Press that some in their ranks actually fight alongside the group.

Jonathan said last year that he suspected Boko Haram members and sympathisers had infiltrated every level of his government and military, including Nigeria’s Cabinet. This complicates attempts to share intelligence.

The US, France and Britain have sent experts to help find the girls, but French and US officials have expressed concerns about how any information might be used.

Five years of attacks
The northeastern region where the girls were kidnapped has suffered through five years of increasingly deadly assaults by Boko Haram. Thousands have been killed, including more than 1 500 civilians this year.

France has negotiated the release of citizens held by Boko Haram in Cameroon and officials intended Saturday’s summit to draw the outlines of a more international approach.

Chinese state media reported that 10 people were missing in the Friday night attack on the camp in a region where Boko Haram has previously abducted foreigners, including a French family of seven and a priest.

Hollande’s administration successfully negotiated the release of the French citizens and officials in Paris said France’s experience dealing with Boko Haram as well as its good relations with the governments concerned were the impetus for the summit.