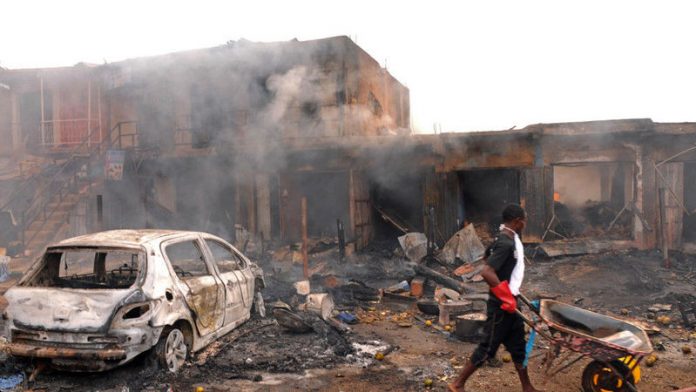 Gabriel Uche never heard the sound of the explosion. All he knew was his brick, corrugated iron-roofed electronics shop was suddenly pitch dark and silent. Then came a burst of searing pain and a high-pitched wailing from his nine months pregnant wife.

Uche’s shop was less than 10m from a car packed with explosives that was detonated in a teeming business district in the central Nigerian city of Jos on Tuesday afternoon. Miraculously, he survived the twin explosions, believed to be the work of Islamist insurgents Boko Haram, which left at least 123 dead.

“I came out and the first thing I saw was a woman with no head and no legs,” he said, standing amid the twisted remnants of laptops and televisions, twisted into spidery globules of black metal. Gusts of wind carried the scent of ash and the acrid smell of burnt flesh.

Next door, his neighbour’s shop was also a smouldering wreck. But he and three customers were burned alive after the explosion set his carpet shop ablaze.

Abdulsalam Mohammed, of Nigeria’s national emergency management agency, told the Guardian that the death toll could rise if more bodies were found when emergency workers cleared the rubble.

Clean-up
In the shadow of a teaching hospital whose windows had been blasted out, rescuers began moving sheets of metal, rubble and singed clothes from the streets.

“We have spent most of this morning picking up body parts – arms, legs. They were scattered over the rooftops,” said one worker, staring blankly into the distance as he spoke. Nearby, the men had amassed a pile of ash-grey debris, from which a single pink high heel protruded.

No group has claimed responsibility but the blast is probably the work of Boko Haram, which has recently escalated its five-year insurgency to carve out a caliphate in northern Nigeria and kidnapped more than 200 schoolgirls from a remote northeastern school in April. In the past month, the group has set off two bombs in the capital, Abuja, and another in the country’s second city, Kano.

The second blast, timed to go off while people rescued the victims from the first one, mimics the tactics used in earlier blasts by the group. Witnesses said a group of youths crowded around a car they noticed was parked on the narrow, shop-lined street and warned panicked people fleeing the scene to stay away from there.

Boko Haram attacks
Late on Tuesday, Boko Haram gunmen also stormed two settlements near Chibok, the village from which the schoolgirls were kidnapped last month. Locals said at least 48 were killed in Alagarno and Shawa when the militants fired on fleeing civilians and razed parts of the villages.

Haruna Bitrus, a resident, said the attack had not provoked any response from an apparently beefed-up military in the area, part of three regions where a year-long state of emergency was extended this month. Nigeria’s military has been stretched by attempts to police a vast, arid area in which fleet-footed insurgents have been able to make lightning raids.

“While the gunmen were fleeing, three of their vehicles broke down and they have stayed behind to fix them. They were there up to this morning” – with no response from the military, Bitrus told AFP.

Jos, a city that has long been a flashpoint for ethnic tensions exacerbated by dissent over resources and power, has largely escaped the violence in Boko Haram’s northeastern strongholds. But the sect has tried to ignite a sectarian war in the religiously mixed central city, including by bombing churches on Christmas Day 2011.

‘Misguided youths’
In an indication of what simmering tensions could bring if unleashed, a mob of Christian youths in Jos’s Tina neighbourhood set up a roadblock yesterday and attacked at least three Muslim residents.

“They were angry, misguided youths and they took it out on innocent people. The Boko Haram have not yet designed a bomb that will kill only Christians,” said Hassan Usman, whose brother has suffered serious head trauma and is in a coma after the attacks.

The city has so far resisted imploding into the sectarian violence that left at least 200 dead in 2010, and 700 two years previously.

“Whatever they are doing is nothing to do with God,” said Ruth Joseph, a tailor who was visiting her sister who works at a roadside restaurant.

Clinics and hospitals around the city have been overflowing with the wounded.

Outside assistance
The recent upsurge in violence has led to anger over the government’s lacklustre response to the threat, prompting it to seek assistance from the United States, the United Kingdom and Israel, who are expected to help to find the abducted schoolgirls and provide counter-terrorism training.

At a summit in Paris last week, the West African nations of Cameroon, Chad and Niger agreed to contribute a battalion each to form a border patrol troop based along the arid Sahelian belt, large swaths of which have fallen under the control of Islamist terrorists in recent years.

“President [Goodluck] Jonathan considers these measures very useful aspects of the concerted international effort to combat terrorism and put an end to the Boko Haram menace,” the presidency said in a statement.

AFP also reported that the US has deployed 80 military personnel to help to find the kidnapped girls.

In a letter to Congress, US Presi­dent Barack Obama said the military contingent will stay in Chad until their support in ending the abduction nightmare that has outraged the world “is no longer required”.

Intel support
“These personnel will support the operation of intelligence, surveillance and reconnaissance aircraft for missions over northern Nigeria and the surrounding area,” he said.

The troops mark a significant boost to an existing US military effort.

But the Pentagon has criticised Nigeria for not reacting swiftly to the rise of Boko Haram, held responsible for thousands of deaths since 2009.

Until the kidnappings, Nigeria had resisted co-operation with the West in its fight against the group. – © Guardian News & Media 2014