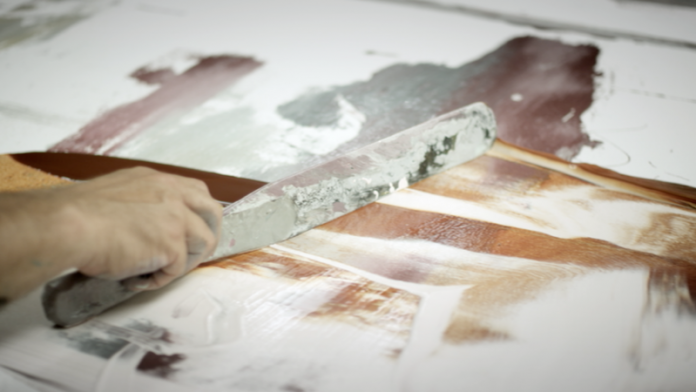 From the outside it can be difficult to get a sense of how an artwork is made. The process of speculating what components constitute a whole is, I think, what fascinates and drives those of us trying to translate, and communicate in the worlds we independently occupy. Artists are able to act as interpreters between that outside world, and the inside one.

I am in the back row of the theatre as painter, sculptor and performer Beezy Bailey enters the cinema for the South African premiere of Outsider, the film of his life. The opening of his latest solo exhibition, Landscapes with a Twist at the Everard Read gallery preceded the screening a few days prior. He sits two rows in front of me and from the back I wonder what it must feel like to be in the audience watching the film of you. I can’t imagine what he must’ve been feeling in that moment but he seemed, from where I was sitting, to be enjoying his popcorn.

As the cinema darkened and the opening credits rolled, people began giggling audibly and someone in my row threw popcorn to diffuse the miscreants. I can only speculate but I assume it was because a lot of people were feeling the same way I did; a kind of dread, premiere anxiety. At a premiere, you really have no idea what to expect. If things go badly it’s two hours of your life you can never, ever recover and, with the artist present in the audience, an escape plan can quickly escalate into a full-scale stealth mission.

Two minutes in and it seems our collective dread is being confirmed. People are giggling as the artist opens a tub of paint, they laugh as he looks out of the window and a kind of mass hysteria erupts around the lower levels of the theatre as a video of his childhood performances plays on screen. The film looks like the worst kind of biopic. With only friends and family being used to confirm the artists presence and importance in the art world, it starts seeming a lot like the slide-show during your best friends 21st birthday speeches. You cringe, but it’s lekker.

But the situation, like most things related to Bailey, is not as it initially seems. The film spans the distance of an incredible life and subsequent career. His family life is complicated and the story of the Bailey family could be a film all on its own. Full of magnates, tycoons, sirs and ladies, his lineage and accompanying footage offer a glimpse of what it means to grow up with a foot on both sides of the tracks.

His road to becoming the artist he is today is tempestuous and lined with eccentric characters that shape his practice into one that has spanned the full course of our recent history. One mentor, Nelson Makuba, was discovered years after the tragedy, hanging upside down from a tree, his feet burned and family hacked and carved into pieces in their house next to him.

His collaborations with celebrity muso’s such as Brian Eno, Dave Matthews and David Bowie are treated sensitively and finally allow their combined artistic efforts a moment to speak without the haze that usually clouds celebrity mash-ups. I was thankful for the inclusion of some deliciously nasty critique from the likes of arts commentator Sean O’ Toole, which provided much-needed balance in a story that quickly became one-sided.

It was really the invaluable footage of the artist in-studio that revealed a process of making that, from the outside, could quickly have been relegated to the throwaway aesthetics of the expressionists. To see him in his element, working with paints the way a chocolatier works with molten cacao, transforms his colourful canvasses into objects of transcendent, fleeting and liquid beauty that communicate complex themes by means of splashes, swathes and deceptively simple mark-making.

Walking around Beezy’s enormous show at Everard Read you get a sense of how prolific the man is. I don’t think I could ever completely grasp the scale of work it takes for an artist to still be standing nearly 30 years into their career. After years of criticism, self-doubt, and sacrifice, it seems like it’s a very long, hard road that one has to travel to be an audience member at the screening of the movie of your life.

Order Outsider on DVD at Deependfilms.co.za
Landscapes with a Twist runs at the Everard Read gallery until June 7.

Getting Beezy with Mandela

Art as muti: Print and paint

The art of public exposure

Hot on the heels of Jesus