US to withdraw from Afghanistan by 2016 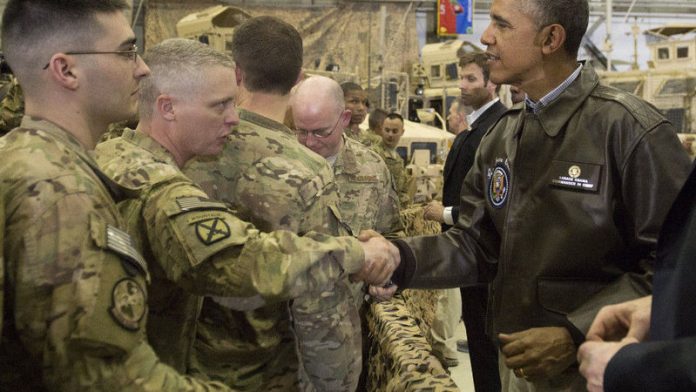 United States forces will complete their withdrawal from Afghanistan by the end of 2016, 15 years after the September 11 attacks, President Barack Obama said on Tuesday.

The US invaded Afghanistan to oust the Taliban regime in Kabul and hunt its ally, al-Qaeda leader Osama bin Laden, author of the 2001 attacks on New York and Washington.

The Taliban crumbled quickly in the face of a US-backed rebel offensive, but later regrouped to launch a bitter insurgency and draw the US into its longest war.

The insurgents are still far from defeated, but Washington wants to withdraw its troops from the battlefield and into a support role for Afghan government forces, and eventually leave.

“We will only sustain a military presence after 2014 if the Afghan government signs the Bilateral Security Agreement [BSA],” a senior administration official said ahead of Obama’s announcement.

“Assuming a BSA is signed, at the beginning of 2015 we will have 9 800 US service members in different parts of the country, together with our Nato allies and other partners,” the official said.

“By the end of 2015, we would reduce that presence by roughly half, consolidating US troops in Kabul and on Bagram Airfield.

“And one year later, by the end of 2016, we will draw down to a normal embassy presence with a security assistance office in Kabul, as we have done in Iraq.”

Brief visit
Obama visited US forces in Afghanistan on Sunday and spoke briefly by telephone with outgoing Afghan leader Hamid Karzai, who is due to step down this year after a June election.

Both of the candidates in that run-off vote, Abdullah Abdullah and Ashraf Ghani, have said that if they win they will sign the security agreement proposed by Washington.

Around 51 000 US-led Nato troops are deployed in Afghanistan at present, supporting Kabul in its fight against the Taliban.

Obama’s visit was conducted in extreme secrecy even though American forces have been fighting in Afghanistan for 12 years and are due to end their combat role within seven months.

His trip was not announced in advance – apparently not even to the Afghan government – and he touched down for only four hours, never leaving Nato’s sprawling Bagram airbase north of the capital.

Karzai, who has long had a difficult relationship with his main foreign backer, refused to come to the base to meet Obama.

US involvement
Obama stepped up the US involvement in Afghanistan sharply after his election, ramping up troop numbers there even as he brought the parallel US operation in Iraq to a close. He  massively increased the number of covert US drone strikes on militant targets in neighbouring Pakistan and ordered the May 2011 US commando raid that killed bin Laden there.

While in Bagram, he said that the steep sacrifice of US troops – more than 2 300 servicemen and women have died in Afghanistan – is being rewarded.

“After more than a decade of war we are at a pivotal moment,” Obama told a hangar full of cheering US troops.

“By the end of this year, the transition will be complete and Afghanistan will take full responsibility for their security.

“Our combat mission will be over. America’s war in Afghanistan will come to a responsible end.”

Ending the long US engagement will likely prove popular at home, but Obama is under pressure from some critics to maintain enough of a force in the region to carry out counter-terror strikes. – AFP