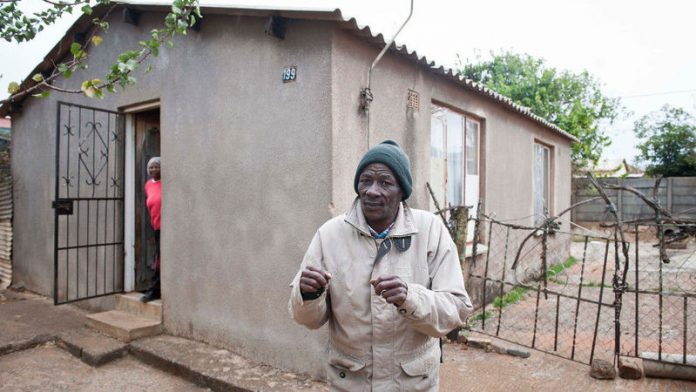 The man they call Champ is a shadow of his former self.

He runs to the shops and back for a sachet of milk, bobbing and weaving as he works up a small sweat.

Many of the children who hail the Champ as he pounds the streets were not even born in 1982, when he was named Boxer of the Year. The man’s exploits are hearsay to them, passed down from generation to generation. But they can’t help saluting the pugilist of old.

In his prime Aladin Stevens had a fierce reputation, one that earned him the nickname Mean Machine.

A newspaper report in January 1989 had this to say regarding a coming fight: “Many boxing fans take their hats off to Stevens, because he never climbs into the ring unfit.”

He was razor-sharp then, and fit – but not now.

As a 30-year-old, he was going back to make amends in Durban. He was a fast-moving southpaw hungry as a mongrel after having lost to Brian Baronet a few years earlier in the Banana City.

He was mean: a man with reflexes that functioned like a machine.

He is 55 now and his past is another country. He speaks the Afrikaans patois of his Toekomsrus, Randfontein, hometown slowly and with difficulty – perhaps the undiagnosed result of taking too many punches to the head.

The interlocutor’s only benefit is that the man is a fountain of knowledge about the history of boxing and his role in it.

Shot by the police
He says he was shot with an R5 rifle by a policeman he suspects was a lover of his ex-wife; the two bullets entered and exited both thighs.

It happened in 1994 and it is a story he keeps returning to throughout the interview. “Ek het niks gekry [I got nothing (out of the claim)].”

Something else – not the bullets of the ordeal – is responsible for his flailing memory. He knows he was married “somewhere in the Eighties”.

The union, which ended in divorce, gave him three daughters – Charlene, Lavern and Dalay, who in turn have given him grandchildren.

But he remembers that the girls used to fight bare-knuckled against their peers while growing up: “Not like girls.”

The eldest is married and lives in Cape Town, although the other two still live nearby and favour him with a dime here and there “for things I want, like this milk”.

One of two boys (the other, Ralph, has since died), Aladin now lives with his mother, who provides for them with her monthly pension grant. They cook and bake together.

Boxing purse
“My highest purse in boxing was R25 000,” Stevens says in the one line of English he utters throughout the relaxed conversation.

His money grew exponentially with each title defence, out of which his trainer, oom (uncle) Andries Steyn, took his 25% cut.

Stevens is a man who confounded critics and fate. When he faced Abraham Gumede at the Portuguese Hall one October afternoon in the early 1990s, it was to be his 13th title defence. All Gumede had going for him was the fable of the unlucky number.

It did not work for him. Stevens went on to defend his crown 15 times.

He was king of the ring.

Fight tally
He incorrectly has his tally at 52 fights, two losses and three draws. The truth is that, when he was going into his 51st fight, he was standing at 39 wins, five draws and six defeats.

But his demons allow him this fact: “I never lost even a single one of the 15 international fights I fought.”

Typical of the scant regard with which South Africa treats its fallen heroes, Stevens has been reduced to a virtual pauper in his lifetime. He is just another unemployed man forced to depend on his pensioner mother for a living.

He flew the South African flag high around the globe: “I fought in Madrid, Spain, as the main supporting bout to Brian Mitchell.”

In that fight he was pitted against a welterweight, a fighter who weighed more than Stevens. But he prevailed and managed a draw.

The Springbok rugby team was at the fight, rooting for him. “I was also Brian’s sparring partner on these overseas trips.”

Fighting the best
He fought the best in the world, defeating local opponents such as Chris Whiteboy, Grant Messias, Walter Mpungose and Nika Khumalo, among others.

The wily promoter Rodney Berman shielded the then up-and-coming Rose of Soweto, Dingaan Thobela, from Stevens.

Even when he clearly avoided this fight, which he claimed “is not a fight I’d like because it wouldn’t be perceived as a genuine world title fight”, Berman conceded at the time that “although the SA champion was a good fighter, he was not in the same league as the Rose of Soweto”.

Aladin Stevens savours one of his accolades. (Madelene Cronjé, M&G)

When Stevens was due to fight Australian Shane Knox in Brisbane in 1992, his camp had just received written confirmation from the World Boxing Organisation (WBO) that “the fight will serve as a final elimination for a shot at the title”.

But the Stevens-Thobela fight never took place because the Rose of Soweto swiftly relinquished his WBO title to fight under the more glamorous World Boxing Association (WBA).

Stevens would eventually lose his title against the number three South African lightweight contender at the time, Danny Myburgh.

Minister of Sport and Recreation Fikile Mbalula has just appointed a new board for Boxing South Africa, following his claims that the sport is “in the intensive care unit”. But the plight of past heroes like Stevens is unlikely to be at the top of the in-tray of the new suits on the board.

In the meantime, he will continue to wallow in the past and hope something will come out of the 20-year-old shooting incident.

The name of Bill van Vuuren, the Krugersdorp lawyer who took his case, remains etched in his mind, even as his memory fades.

He comes alive when asked about a fight he considers his best. It was against Evans Gwiji, he says.

The previous week – on a Friday – his dad Edward had died. “My father had told me in his hospital bed not to pull out of the fight,” he recalls.

Fond memories
He has fond memories of his father, the man who taught him to fight, and his childhood. “My brother Ralph died. We grew up in Newclare. I attended Coronationville High School, where I did not finish my standard eight. I had to complete it in Randfontein when we moved here.”

The house in Toekomsrus was originally his uncle’s. There is no chronology in the tale he tells.

Dad himself was a backyard boxer, he says. Stevens and his cousin Charles played at the back of the house, where their fathers kept boxing gloves and other paraphernalia.

Although he was a soccer player in his younger days, with the nickname Pelé, life in the home of a boxing fanatic meant he was easily swayed away from Bosmont Chelsea. In no time his true talent came to the fore.

In boxing Stevens would get the moniker Mean Machine, after American heavyweight fighter John Tate.

He has no idea how the new boxers compare against his generation, he says.

“I can’t say I follow boxing when there’s no boxing on TV. I just watch soccer, which is now the fare on television. It’s been a while since I watched a live boxing match.”

The Beast
Vuyani Bhungu, known as the Beast, was “the last strong boxer” he watched on television.

From his neck of the woods came Malcolm Klassen, Jan Bergman and Simon Ramoni. “I always used Bergman as a sparring partner because he was fast.”

He helped Ramoni with his boxing too, says the Champ.

His mother Margaret, just back from seeing off a relative taken away in an ambulance, remembers seeing Klassen walk by their house a few days ago.

“Boxing gave me fame. Everywhere I go, people remember me,” says Stevens. But what he wants now, more than anything, is to know what has happened to his claim against the minister of police.

“At the moment what is important is my claim from the shooting. I want nothing from anyone. My mind is blank now. Let me get the money; maybe I can think again then.

“I was world-rated WBA – moved from nine to six. I was supposed to fight Ray ‘Boom Boom’ Mancini. My livelihood was taken away from me when that cop shot me.”

Goodwill
He lives off his mother’s pension and whatever little money his daughters – with whom he has a good relationship – can spare him, he repeats.

Life used to be beautiful. A Chevrolet fanatic, Stevens owned a variety of cars bearing the marque – a 4.1, a Commodore, a Berlina and a Rekord. “I grew up on Chev,” he says.

It is difficult to see what he could have done with his money. The house is bare. The couches have seen better days. So has the main door. The bedding is spare. The walls could do with a lick of paint.

It is a depressing environment, certainly not worthy of a champ, someone who gave their all for the motherland.

He dusts off his trophies, among them one he won when he was named Boxer of the Year, beating off competition from Gerrie Coetzee.

“I loved boxing; it was in my blood.” – © makatilemedia