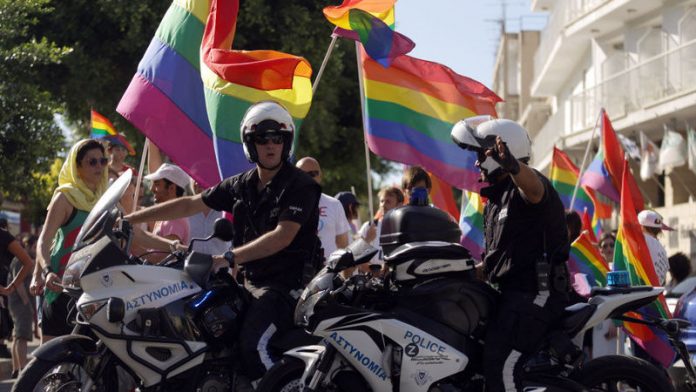 Thousands of people marched in Cyprus’s first gay pride parade on Saturday, calling for equal rights in a country where homosexuality is still vehemently opposed by an influential Orthodox Church.

Waving rainbow flags, more than 3 500 people of all ages marched peacefully through the streets of the Cypriot capital where earlier a much smaller, anti-gay group clashed with police.

“I’m here because I support the right of everyone to be who they are,” said activist Magda Zenon. “I want to live in a society where everyone has equal access to resources and the law.”

Cyprus decriminalised homosexuality in 1998, five years after a lone activist won a damning judgement against the country from the European Court of Human Rights.

Slow progress
Sixteen years on, activists say Cyprus still lags far behind its European Union peers in terms of rights for gay people and has been slow in pursuing legislation on civil partnerships.

Gay couples in Cyprus do not have the same rights to social housing and other benefits as heterosexuals and miss out on other entitlements, such as being consulted over medical treatment if a partner is ill.

“There is one love, and our love deserves equal recognition before the law,” said Gabi Calleja of ILGA Europe, an advocacy group for lesbians and gays.

Shortly before the gay pride started, about 200 people, including clerics, held a noisy protest outside the island’s Parliament. Some scuffles broke out.

The gay pride was one of the largest marches seen in Cyprus in several years, bigger than protest gatherings over Cyprus’s tumultuous financial bailout in 2013.

Several ambassadors accredited to the island showed their support by attending. Austria’s ambassador Karl Mueller turned up with painted sideburns to resemble drag artist Conchita, the 2014 winner of the Eurovision song contest.

“This is part of a person’s rights to express themselves freely and I think it’s high time to emphasise the rights for these groups,” said Mueller. – Reuters