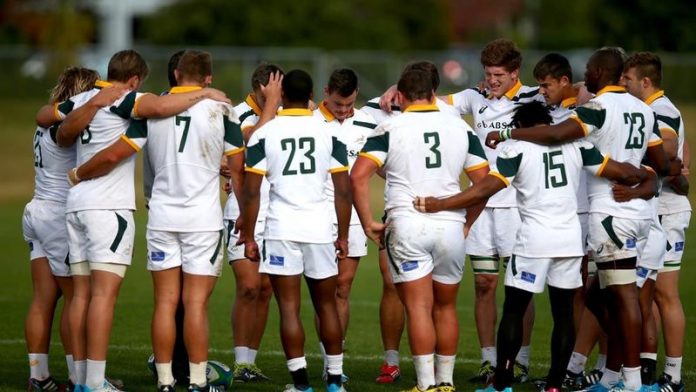 The Junior Springboks opened their IRB Junior World Championship (JWC) campaign with an impressive 61-5 win over Scotland at the QBE Stadium, North Harbour in New Zealand on Monday.

The South Africans scored nine tries, after Scotland took an early lead with a break-away in the first 10 minutes. The Junior Springboks stayed calm and soon reaped rewards for their efforts as first Pierre Schoeman (prop) and then Sergeal Petersen (left wing) crossed the try-line.

Both tries came from a call by captain Handré Pollard to execute attacking set-plays rather than kicking for poles. The skipper, who had a superb match, kicked both conversions to give his side a 14-5 lead at the break.

Scotland did well to frustrate the South Africans at the breakdown in the opening stanza, which prevented the Junior Springboks from unleashing their powerful backs. However, the South Africans got into their full stride after the break and combined their physical presence with skillful play to score seven more tries.

Good interplay
The young South Africans enjoyed much better control of the forward exchanges after the break and this allowed their dangerous backs to strike with purpose. Pollard started the spark with a great chip and chase that resulted in big winger Greeff scoring. More probing play by the flyhalf saw outside centre Jesse Kriel cross the line to score the bonus-point try.

Not to be outdone by the backs, the forwards played their part and kept to their plays and structure. Lively hooker Malcolm Marx scored after good interplay among the front row and number eight Aidon Davis also got on the score sheet, but not before fullback Gelant showed great pace down the blindside for his first JWC try.