From housing to travel, MPs learn about perks of the job 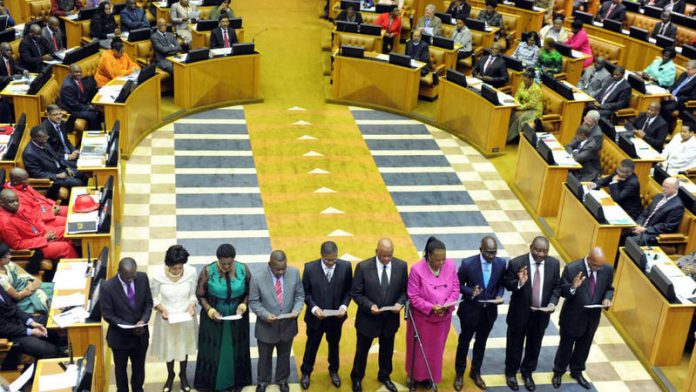 With perks ranging from state accommodation, free travel, and free top-of-the-range technology equipment, being a member of Parliament is close to hitting a jackpot.

Lawmakers are accommodated at the partially furnished parliamentary villages around Cape Town, where they pay a nominal fee of up to R250, which also covers their bus fares to and from Parliament. This is on top of a salary, which for an ordinary or lowest paid MP is R933 852 per annum.

In the parliamentary villages, MPs receive free electricity and water, gardening services, 24-hour protection and free transport for school-going children to any school in Cape Town.

Ordinary MPs are allocated 86 single air journeys per financial year, while party whips get 94 single flights. All travel is in economy class except for members who have served for 10 years or longer, which includes service in Parliament or in the legislative sector, members who are 70 years or older, and members with special needs, who are dealt with on an individual basis taking into account their specific requirements.

If an MP chooses to travel by train, bus or a motor vehicle instead of flying, they would be reimbursed per kilometre by the shortest route between the two points. But the policy only allows a maximum of 10 journeys in a financial year. When MPs travel a distance in excess of 800km, they are entitled to hotel accommodation en route and the ceiling on that is R1 850 for dinner, bed and breakfast.

Travel allowances
An MP who chooses to use their own vehicle for daily commuting and not the buses provided for to and from the parliamentary villages, would be reimbursed if the distance travelled exceeds 30km. Travelling to and from airports is also paid for.

MPs are also issued with airport parking for which they receive cards to use at airports, allowing them access to parking at major airports. The maximum allowance for parking is R44 000 per year.

New MPs whose residential addresses are not in the Western Cape will be paid an “establishing” fee of R17 700, which is paid with their first salary payment, while returning MPs get an amount of R11 300 to replace household goods such as toasters, kettles, irons and TV sets – items that are not provided by the department of public works in the parliamentary villages.

Parliament is also proving to be geek heaven. MPs can choose their own communication equipment, which state money will “provide a comprehensive reimbursement allocation for”.

A new policy, which has not been signed on yet, will allow MPs to take a contract for the ICT equipment with mobile service providers of which Parliament will reimburse the costs subject to the set limits.

An ordinary MP gets a standard monthly allocation of R700, home internet allocation of R250, a home landline for R350, a laptop and data contract of R1 050, tablet and data of R500, a mobile phone with voice and data of R1 600 and an insurance component of R450.

“The allocations had been considered looking at the market costs of contracts, devices and data and the allocations set will allow members to select top-of-the-range equipment with sufficient voice and data to satisfy their needs,” said Harper.

Tools
She said Parliament sought to ensure that MPs are provided with up-to-date tools, in order for them to fulfil their duties as public representatives in an efficient and effective manner.

ANC MP Mandla Mandela was possibly relieved to hear that a flight from Mthatha Airport to Cape Town via Johannesburg was considered a single journey.

“We make provision for the fact a member may not be able to fly directly to Cape Town. We refer to those journeys as multi-sector journeys and are calculated as single journeys,” said Harper.

Mandela raised an issue about MPs who represent rural constituencies where airports were “not accessible”. “In my case, for instance, the Mthatha Airport is 80km away, while the East London Airport is 215km away. We are subjected only to certain routes. If you fly out of Mthatha, you are going to Jo’burg, if you fly out of East London you are going to Cape Town. Is it considered a single trip if you fly from Mthatha to Jo’burg and within two or three hours, you connect another flight to Cape Town?” asked Mandela.

Tuesday was the first day of a five-day training course for MPs to learn the ropes of Parliament.