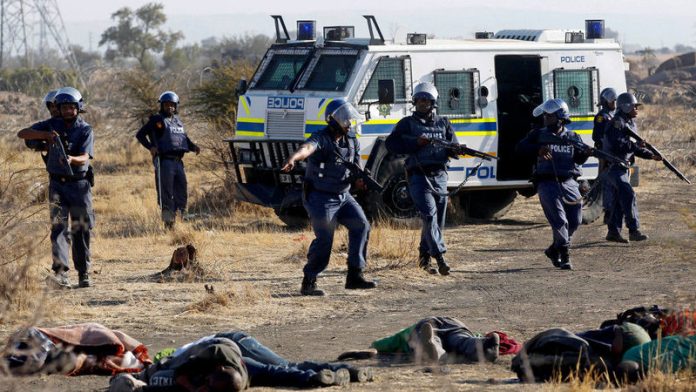 “That motherfucker. I shot him at least 10 times.” These words can be heard in a shaky cellphone video taken at Marikana on August 16 2012, the day that 34 striking miners were shot and killed by the police.

Constable Edward Sebatjane, who fired shots at mineworker Thobile Mpumza in what he says was self-defence, this week denied to the Farlam commission that he uttered any of the derogatory phrases heard in the video and could not identify whose voices they were.

Both Dumisa Ntsebeza, representing the families of the deceased miners, and Dali Mpofu, representing the injured and arrested mine workers, said that the use of such language by the police was not only highly inappropriate but also “celebratory, bragging and even triumphant” in its nature and tone. It was not in line with someone who had fired shots in self-defence, they maintained.

Footage has also been shown at the commission of police members dragging the bodies of injured and dead mineworkers while pointing cocked guns at them, in order to search them for weapons.

When the commission started in October 2012, the police made all the right noises. But holes have been shot in their case ever since.

Self-defence
In its opening statement, the South African Police Service (SAPS) clearly notes how it tried to facilitate peaceful negotiations during the strike. The police go on to say that “the use of lethal force was the last possible resort … despite meticulous scenario planning by experienced generals and other senior officers” and that the officers who fired many shots did so “in the reasonable belief that this was an answer to the imminent danger they were [in]”. In other words, self-defence.

The statement, although maintaining that the police did everything in their power to control the situation at Marikana, is also quick to point out misdemeanours by other parties, namely Lonmin, the National Union of Mineworkers, the Association of Mineworkers and Construction Union and the miners themselves, in contributing to what’s become known as the Marikana massacre.

But the cracks are widening in the police’s version as police witnesses contradict themselves and each other.

Possibly the most significant blow to the police’s case was when Lieutenant Colonel Salmon Vermaak “broke ranks” with his contradictory evidence earlier this year. This came after he realised he would be made to look like the scapegoat for some of the deaths at the massacre.

Vermaak also told the commission how Brigadier Adriaan Calitz had phoned him, asking him to align his testimony with Calitz’s.

Vermaak revealed how the Marikana operation was a prime example of poor information management. He also pointed to inadequate training of police members and their incomplete knowledge of legislation and standing orders.

Discrepancies
Lieutenant Colonel Stephen McIntosh, one of the top police negotiators at Marikana, recently came under fire for discrepancies in his own statements – mentioning threats made to the police by a strike leader known as “Mr Noki” in his supplementary statements but not in his original statement.

Even more telling is the glaring absence of this incident in the police’s occurrence book. This raised questions about whether it was McIntosh’s and, indeed, the police’s intention to mislead and deceive the commission.

During the same cross-examination, McIntosh admitted to including hearsay in his statements, rendering his testimony unreliable in the eyes of many of the parties. Additionally, the commission found that McIntosh was not experienced in labour disputes – raising questions about why the SAPS would send inappropriately experienced officers to the scene.

Another commander put in charge of one of the groups of police at Marikana, Captain Wayne Kidd, also testified that he did not have any crowd control experience. He admitted to not being aware of the relevant legislation in this regard, namely standing order 262, and not knowing when it would or would not be appropriate to use lethal force at a gathering.

Order to shoot
At least two police members under Kidd’s command claim to have heard him give the order to shoot at protesters. But Kidd vehemently denied these allegations, saying he did not even know where those particular members had been standing.

The overall picture one gains of the scene at Marikana is one of miscommunication and general chaos.

This past week, the police’s self-defence argument has also been scrutinised, with some parties saying they believe that the striking miners had been blocked by the police and were unable to escape past them, their Nyalas and the barbed wire to get back to the informal settlement. This again seems to contradict the police’s claim of self-defence.

Former police minister Nathi Mthethwa has yet to testify before the commission. He may face a Herculean task if he attempts to plaster up the cracks in the police’s case.