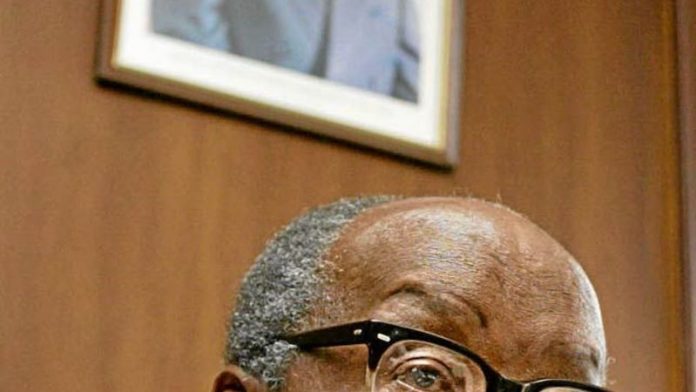 Veteran nationalist, former minister, Zanu-PF politburo member and one of Zimbabwe’s first black journalists Nathan Shamuyarira is likely to be buried at the National Heroes Acre, a move that could anger some because of his defence of the Gukurahundi massacres.

Shamuyarira (85), who resigned from government in 2000 and active politics in 2010, died at Harare’s West End hospital on Wednesday, where he had been on life support. He had been ill for some time.

He is credited as one of the few Zanu-PF officials to resign from office. Most die in office even when they are incapacitated.

Shamuyarira was the country’s first information minister after independence. He held the portfolio during the Gukurahundi massacre, which took place during a period of civil unrest in the 1980s when the North Korean-trained soldiers from the Fifth Brigade allegedly massacred about 20 000 civilians in the Matabeleland and Midlands regions. The massacres only stopped with the Unity Accord.

Shamuyarira ignited a political storm and attracted the wrath of many people, including the late Zanu-PF national chairman John Nkomo and former Zapu members, when he defended the Gukurahundi massacres in October 2006. He suggested that President Robert Mugabe and former Cabinet minister Edison Zvobgo were wrong to apologise for the Fifth Brigade massacres, as the soldiers were working in the interest of the nation. Mugabe had said Gukurahundi was a regrettable “moment of madness”.

“No, I don’t regret. They were doing a job to protect the people,” he was quoted as saying at a conference on national reconciliation in the resort area of Vumba.

‘He will go to the grave with that statement’
Bulawayo-based political commentator Dumisani Nkomo, who is a nephew of former Zapu leader and Zimbabwe’s vice-president Joshua Nkomo, said it was unfortunate that many people will remember Shamuyarira for defending Gukurahundi rather than his contribution to the liberation struggle.

“It’s very unfortunate that he will go to the grave with that statement. Many people in Matabeleland and Midlands will remember him more because of that statement, which in a way has eclipsed what he did for the country,” said Nkomo.

Politburo sources told the M&G on Thursday that Shamuyarira was most likely to be buried in the Heroes Acre, given the role he played in the liberation struggle and also because he was close to Mugabe.

Mugabe visited Shamuyarira in hospital and spent almost two hours with him on Monday last week.

“He is one of the early nationalists, and a founder member of Zanu. He is also close to the president and was writing the president’s biography and memoirs of the liberation struggle at the time he died. Nathan was almost of similar age [as Mugabe] and could easily relate,” said a senior party official.

Shamuyarira’s journalism career started in 1953, when African Newspapers Limited employed him as a cub reporter. He rose to editor-in-chief of African Newspapers from 1959 to 1962. He then left journalism to join the Zimbabwe African People’s Union (Zapu), which was recruiting black intellectuals to spearhead the struggle for independence.

At independence he was minister of information. He later became minister of foreign affairs.