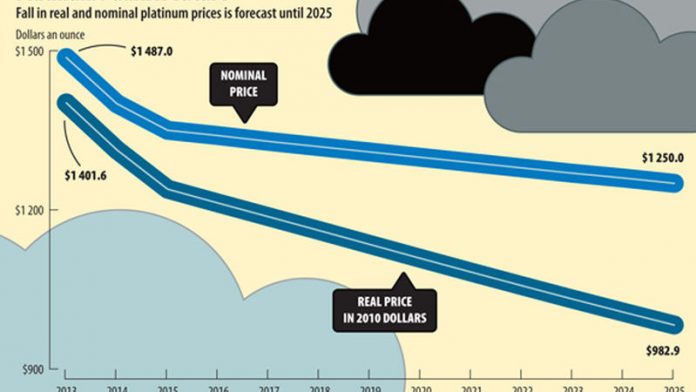 Palladium reached the highest price in more than three years after government-led talks with the union leading a pay strike in South Africa failed. Platinum climbed to the highest this month and gold was little changed.

More than 70 000 mineworkers have been on strike since January in South Africa, the largest producer of platinum and the second-biggest for palladium. Negotiations overseen by Minister of Mineral Resources Ngoako Ramatlhodi with the Association of Mineworkers and Construction Union (Amcu) ended without a resolution. Producers will consider steps to end the strike.

Palladium gained 18% this year and platinum rose 6.6% as the South African labour strike cost companies about R22-billion ($2.1-billion). Demand for the metals, which are mainly used in pollution-control devices in vehicles, will exceed supply for a third successive year, Johnson Matthey data show. Holdings in platinum- and palladium-backed exchange- traded products are at records, data compiled by Bloomberg show.

“The strike still remains unresolved and this could rumble on for some time,” Robin Bhar, an analyst at Societe Generale SA in London, said by phone on Tuesday. “That will gradually tighten up supply. There’s quite a bullish outlook from the demand side” as consumption by car companies increases, he said.

Palladium for immediate delivery rose 0.5% to $847.25 an ounce by 9.02am in London, according to Bloomberg generic pricing. It touched $849.25, the highest since February 2011. The metal for September delivery on the New York Mercantile Exchange gained 0.7% to $847.65. Futures trading volume was 11% above the average for the past 100 days for this time of day, data compiled by Bloomberg showed.

Repeated attempts have failed to engineer a breakthrough in the dispute that has idled 60% of output in South Africa. The talks that ended on Monday were to be the last led by the government, according to Ramatlhodi. Amcu will meet with members starting on Tuesday to get views on how to respond to the outcome of talks, Amcu leader Joseph Mathunjwa said.

Palladium demand will beat supply by 1.6-million ounces this year and platinum’s shortage will total 1.2-million ounces, both the most ever, according to Johnson Matthey data.

Gold slipped in May as tension eased between Ukraine and Russia and as the euro weakened on speculation that the European Central Bank would add to stimulus. Data this week may show US retail sales rose after Federal Reserve Bank of Boston President Eric Rosengren said on Monday economic growth will be stronger in the second half. Bullion slid 28% last year on expectations the Fed would slow bond purchases.

“Gold appears to be steadying after the May slump,” Howard Wen, an analyst at HSBC Securities, wrote in a note. “We do expect the recent price decline to encourage some emerging market bullion demand but we do not believe this has fed into more stable gold prices, at least not yet.” – Bloomberg