Workers rally to a different flag 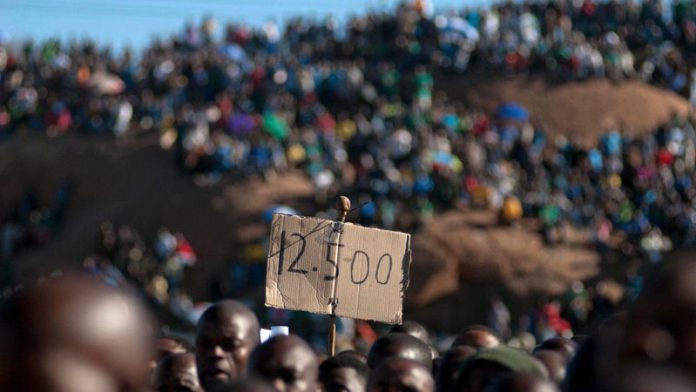 The debilitating 21-week-long platinum strike tells us two starkly opposing tales about what is happening on the labour front in South Africa.

On the one hand has been the 70 000 mineworkers belonging to the Association of Mineworkers and Construction Union (Amcu), leading a struggle to bury the tradition of cheap migrant labour.

On the other, there is the decline of the once mighty Congress of South African Trade Unions (Cosatu), reduced to infighting as a result of being drawn into ANC alliance politics, with its new traditions of wealth accumulation and political patronage.

We have had the longest strike in South Africa’s mining history and it passes Cosatu and its affiliates by. These days Cosatu finds itself alongside the government. At its deepest level, the underlying causes of the problems within Cosatu lie in the major structural changes that have affected the working class under neoliberal capitalism, alongside the realignment of Cosatu’s membership.

Over 20 years, South Africa’s working class has essentially become an unemployed, casualised, semi-homeless mass, whereas Cosatu has changed in composition from a predominantly blue-collar, working-class federation in its heyday to the largely public sector white-collar group that it is today.

With Cosatu reduced to a morally compromised coterie of middle-class leaders hanging on to state institutions, negotiation forums and investment companies, and implicated in engineering political career-pathing, its implosion was an accident waiting to happen.

There are those who wish to put the issue of politics at the centre of Cosatu’s crisis, but with two divergent paths to their critique and possible remedy.

On the right, the story goes that Cosatu unions have been too political and have sacrificed workers’ interests for political gain. From this side the call goes out for unions to go “back to basics” – meaning focusing on pure collective bargaining and servicing members.

On the left, the analysis is that Cosatu has adopted the wrong politics, kowtowing to the ANC’s neoliberal policies. It’s not a problem of Cosatu being too political, but of not being political enough; if Cosatu embraced revolutionary politics then the problem of worker disaffection would be solved.

Structural analysis
In a sense this latter critique is valid, but it doesn’t go far enough. Unless we begin to talk about a much deeper structural analysis of the source of the trade union problem we will end up merely grafting left-wing slogans on top of structures that are no longer representative of the fighting battalions of the working class.

Should we be in despair at the imminent collapse of the labour movement, on the cusp of a new upturn in working-class struggles?

The National Union of Metalworkers of South Africa (Numsa) is caught in a conundrum. On the one hand, it is pitching its tent on the ground of the United Front, an initiative seeking common ground with hundreds of existing working-class struggles in communities and, on the other, it is held captive by the need to honour its obligations to save Cosatu from itself.

Having done so much to inspire activists with its special congress resolutions of December 2013, Numsa is in danger of misreading the mood in the country among working-class militants as it keeps its focus on the rot in Cosatu, whether general secretary Zwelinzima Vavi stays in his job or not, whether a special congress is held or not and whether the ANC’s “mediation” is allowed to take its course or not.

In a way, Numsa is caught in a very traditional notion of the left – that any hope of advancing working-class struggles depends on trade unions as the most organised force. What we in South Africa know as trade unions are the result of past struggles and past victories, compromises and choices. It is appropriate to ask whether those choices are still appropriate for the period of neoliberal capitalism today.

Varied organisations
Over the course of its history the working class has thrown up a profusion of different kinds of organisations, from benefit societies to clubs, cultural groups, co-operatives, trade unions, political parties and social movements. In no country in the world are the trade unions, taken as a whole, the majority organisational expression of workers, even of employed workers.

To be sure, South Africa has a relatively large trade union density – at 30% – but in some major industrialised countries, such as the United States, this can drop to less than 12%.

Nevertheless, despite this “numbers question”, many have argued that trade unions are unique among all the different forms of working-class organisation in that they contest the terms of exploitation of the working class, so their social weight and significance is far greater than their numbers.

But is it historically true that trade unions have always played this role more than other organisational forms?

In Britain at the turn of the 20th century, workers who had set up trade unions but had no political party established the Labour Party. Then, as the parliamentary party shifted towards the centre, the trade unions with membership greater than the Labour Party often occupied a space to the left of the party.

International format
In Germany, however, the original Social Democratic Party preceded the trade unions, vastly exceeding them in terms of membership. There, the trade unions occupied a space on the extreme right wing of the party.

In Brazil in the 1980s the trade unions set up the Workers’ Party, known as the PT. When Lula da Silva came into power and shifted the PT to the right, the labour unions of the Unified Workers’ Central (Cut) were dragged rightwards with Lula. It was a social movement, the Landless Workers’ Movement (MST), that became more representative of the working class in Brazil.

In South Africa, for the past 12 years community-based social movements have been at the forefront of working-class struggles, whereas the trade unions have largely stuck to Labour Relations Act-regulated wage struggles and labour peace.

But then along came the platinum workers. These are the workers who sowed what would become the whirlwind of the Marikana massacre, the inheritors of the self-organised strike committees who sparked the 2012 strike wave that drew in the 100 000 workers who have joined Amcu.

Amcu, in turn, was formed by ex-National Union of Mineworkers (NUM) officials dismissed by the union and disgruntled workers sick of what they saw as the NUM’s cosy sweetheart relations with the mine bosses. Apart from this, Amcu is quite a “traditional” union, apolitical and an affiliate of the National Council of Trade Unions (Nactu).

Lack of structures
Some commentators have bemoaned Amcu’s lack of structures and its apparent unpreparedness for a strike of these dimensions. True, Amcu was ill-equipped and its pressure on new members to disband the strike committees and elect shop stewards in the tradition of the NUM was not what workers expected.

But its lack of structures and its “inexperience” may be precisely what made it difficult for the Amcu leadership to impose a settlement on its own members.

Unlike the corporate version of events, it is not Amcu leaders keeping workers out of work by “deluding” them or making false promises. Rather, it is the stubborn, uncompromising workers who have held the Amcu leadership accountable and who have defied the mine bosses’ attempts to divide them – as seen by mine bosses sending text messages directly to workers.

So should we be mourning the imminent demise of Cosatu in the context of a growing movement of community-based struggles by the working class, the post-Marikana strike wave and the struggles of the platinum workers today? Or should we instead be celebrating the rise of new forms of organisation and a new movement?

An old slogan from the 1980s shouted out: “Don’t mourn, mobilise!” This is your answer. –  sacsis.org.za

Leonard Gentle is the director of the International Labour Research and Information Group.