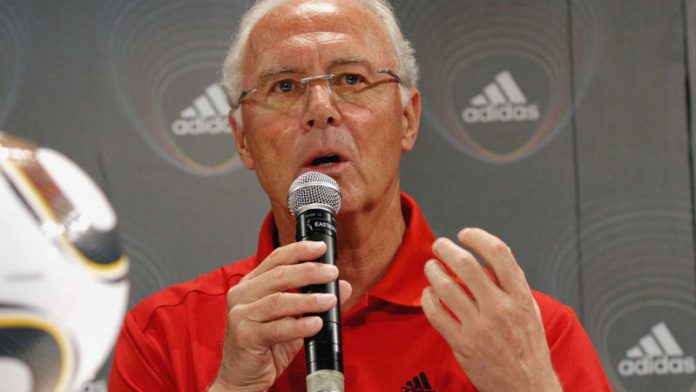 Fifa said the suspension was requested by ethics prosecutor Michael Garcia, making Beckenbauer the first person to be punished as a result of the case.

Beckenbauer refused “repeated requests for his assistance, including requests that he provide information during an in-person interview or in response to written questions provided in both English and German,” Fifa said in a statement.

Beckenbauer responded by saying he was surprised by news of the ban and that he had only received the questions in complicated legal English.

“I had to look at the date and make sure it wasn’t April 1. I thought it was an April Fools’ joke,” Beckenbauer said of the ban in an interview with Sky Sport News in Germany.

It was unclear whether the Fifa suspension would prevent Beckenbauer – who won the World Cup as both a player and coach – from attending the tournament in Brazil.

Fifa suspensions relating to “any football-related activity, at any level” typically include attending matches and meeting other football officials.

Beckenbauer was a voting member of Fifa’s executive committee in December 2010 when it chose Russia as 2018 World Cup host and Qatar to stage the 2022 tournament.

Beckenbauer on Friday said Garcia had sent him “around 130 questions, such as how old was the grandmother when she died. And I really wasn’t bothered.”

He said he informed Fifa he was prepared to answer the “important questions, the ones about corruption that keep coming regarding the awarding [of the World Cup] to Qatar” but that he needed to understand them fully before he could respond.

“I said, ‘Please, I’m not proficient in English – in legal English – give me the questions in German.’ That was refused and so I said, ‘OK, I’m not in a position to answer them,'” Beckenbauer said.

The 68-year-old Beckenbauer said he was willing to answer any charges in German and that he had “nothing to do with corruption”.

Beckenbauer still holds top-level positions in world football, after serving on Fifa’s board from 2007-2011. He joined after leading Germany’s organisation of the 2006 World Cup.

He is an adviser to Fifa’s football committee and a global ambassador for Bayern Munich.

Garcia, a former US attorney, has said that next month he will deliver a dossier on the World Cup case, which Fifa critics hope will order a revote.

Beckenbauer was named in recent reports by Britain’s The Sunday Times newspaper, which has alleged widespread corruption linked to Qatari official Mohamed bin Hammam and the 2022 bidding campaign.

Like most Fifa board members, Beckenbauer has not publicly revealed which bid he voted for. Qatar defeated the United States 14-8 in the fourth round of voting for the 2022 event.

Fifa said its independent ethics judge, Munich-based Joachim Eckert, was not involved in the decision to suspend Beckenbauer, who faces further sanctions.

“The case is now the subject of formal investigation proceedings being conducted by investigatory chamber member Vanessa Allard as chief of the investigation,” Fifa said.

Garcia could still seek to interview Beckenbauer, though he closed the investigation phase of his probe on Monday.

On Wednesday, Garcia addressed Fifa’s 209 member countries in Sao Paulo and stressed that football officials are obligated to cooperate with his work.

“And it makes real penalties available to all those who fail,” the American lawyer said then. – Sapa-AP