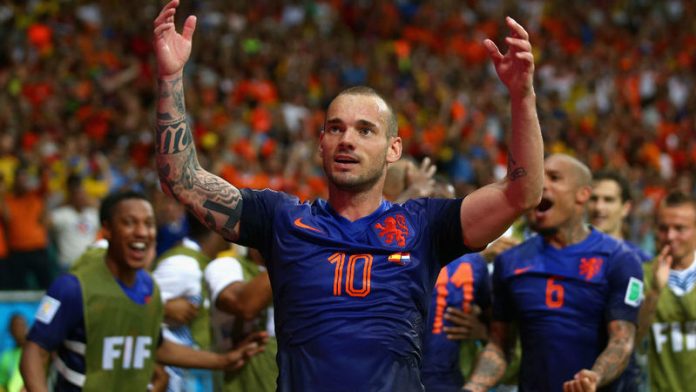 Rain and clouds may have shrouded Salvador but the orange shirts of the Dutch fans brightened up the Arena Fonte Nova as they celebrated one of the Netherlands’ most famous World Cup victories in a rematch of the 2010 final.

Even more so than Brazil’s opening win on Thursday or Mexico’s rain-soaked 1-0 win over Cameroon earlier Friday, the Dutch put the World Cup on a festive footing.

Fellow veterans Robin van Persie and Arjen Robben produced two superb each and showed the host nation why the Dutch have often been called the Brazilians of Europe.

“It was inexplicable,” said Van Persie, the leader of a team which has come to Brazil carrying few expectations from a nation that has all too often been spoilt for sparkling football. The veterans were thought too old, the rookies too inexperienced.

Players openly said that just avoiding defeat against Spain would be enough, nevermind beautiful play. However, the game yet again lived up to its reputation for unpredictability.

“This is why you play football,” the Netherlands’ beaming coach Louis van Gaal said after his disputed move to a 5-3-2 line-up proved a master stroke.

Spain was always going to try to dominate possession, as in the 2010 World Cup final, but this time the Dutch knew how to hit back.

The defending champion started Diego Costa but the striker was as ineffectual as the rest of the aging team, highlighted by a massive blunder by Iker Casillas that led to Van Persie’s second goal, a symbol of Spain’s fate on an infamous Friday 13th.

It was not the only surprise on the second day of the World Cup. When people around the world expected a sun-soaked tournament, torrential rain dominated Natal and Mexico’s victory over Cameroon, courtesy of a goal from Oribe Peralta that moved the Central Americans level with Brazil in Group A.

Chile played Australia in a late Group B game, seeking to draw level with the Dutch.

Casillas was not the only football star to suffer ignominy on Friday.

Franz Beckenbauer, who won the World Cup both as a player and coach, was banned from football for 90 days by Fifa for not cooperating with a fraud investigation into the 2018 and 2022 World Cup bids. Beckenbauer was the first person to be punished as a result of the investigations.

On the pitch, the day was almost as black for the ashen-faced Vicente Del Bosque, who only four years ago coached Spain to its first World Cup win before following it up with the 2012 European championship title.

Instead it was Spain’s worst World Cup loss since losing 6-1 to Brazil when the tournament was last held here, 64 years ago.

“All of us have to find a way to solve it,” Del Bosque said.

One fact to bear in mind, though: Spain also lost its opening game four years ago before lifting the cup.

On Saturday, the showcase game will pitch England against Italy, while Uruguay faces Costa Rica in the other Group D match.

Group C kicks off with Colombia against Greece. – Sapa-AP