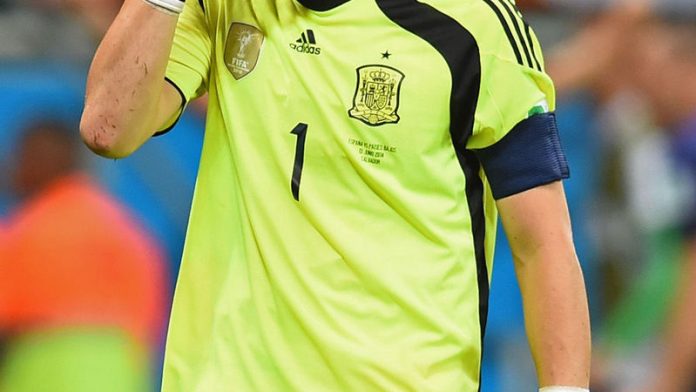 Spanish newspapers on Saturday bemoaned the “humiliation” and “catastrophe” of world champions Spain’s 5-1 battering by the Netherlands in their opening Fifa World Cup 2014 match in Brazil.

Most splashed on their front pages were photos of Spain’s goalkeeper and captain Iker Casillas kneeling with his head bowed as Dutch players celebrated after ripping apart the Spanish defence. The image summed up a tale of fallen heroes in a team shouldering huge expectations as it defends its world title.

Cafe terraces across Madrid erupted with joy when Spain went 1-0 up through a contentious penalty by Xabi Alonso in the 27th minute on Friday night. But they fell silent when Robin van Persie struck back just before halftime with a stunning header that looped over Casillas and into the net.

The mood darkened as the Dutch added four more goals in the second half and city streets, accustomed to noisy celebrations after Spain wins, were eerily quiet as fans filed silently out of bars and plodded home in their red shirts.

Some fans refused to accept it meant the “end of an era”, but others said it was time for the coach to make radical changes.

“We now have to lift ourselves up, or at least to try and do so,” said salesman Martin Valero (25). “It’s no big deal, last World Cup we also began with a defeat but went on to win,” he said.

Worst defeat
It was Spain’s worst defeat in 64 years and comes after “La Roja” had dominated world soccer since 2008.

With two Euro Championships and the 2010 World Cup under their belt, expectations for Spain in this competition could not be higher and the response to Friday night’s upset was bitter. It left fans and press alike mourning the decline of Casillas and demanding changes for the next match against Chile on Wednesday.

“This is not just any old defeat. It is a historic disaster. There is no precedent of this scale in the history of the World Cup,” Marca wrote.

The headline “Humiliation” ran on the front page of general daily El Mundo. “World disaster,” said leading newspaper El Pais, noting on its front page that Spain had not let in more than one goal in a World Cup or European championship match since 2008. On Friday “the collapse was total, it was hell”, said the paper.

“La Roja is at the twilight of its best ever team,” said football commentator Jose Samano in an opinion editorial in El Pais.

Red in the face
Barcelona general newspaper El Periodico saw the defending world champions, La Roja or the Reds, as “Red with shame”.

Madrid sports daily AS mourned a “total breakdown” by Spain in the second half as they gave away their lead.

Spanish papers noted bitterly that the scoreline – two goals each by Arjen Robben and Robin van Persie, and one by Stefan de Vrij – was sweet revenge for the Dutch for their 1-0 defeat by Spain in the 2010 World Cup final in South Africa.

The Spanish press’s only source of consolation was pointing out that Spain lost its first game in that World Cup, to Switzerland.

Many commentators mourned the ineffective performances of past heroes of the Spain squad, such as Casillas, defenders Sergio Ramos and Gerard Pique, and midfielders Andres Iniesta, Sergio Busquets and Xavi Hernandez.

End of an era
Some thought the defeat marked the end of an era for the world and European champions.

“Spain is like the remains of an empire that knows it is near its end,” wrote commentator Joan Maria Batlle in Sport.

“Casillas was unrecognisable. Pique and Sergio Ramos were uncoordinated, as if they had never played together,” while Iniesta and Xavi dropped out of sight in the second half, Batlle wrote.

The online editions of the sporting press on Saturday were a gallery of Spain’s glum-faced fallen heroes. Marca‘s led with Casillas’s post-match apology to fans. He was the first Spain goalkeeper to let in five goals since 1963, when Scotland beat them 6-2 in a friendly.

AS said that fans consulted in a survey online “want to get Pique, Busquets and Xavi Hernandez out of the team and have great doubts about Casillas and Diego Costa”, a new face in the squad this year. Instead, they want midfielders Javi Martinez, Koke and Pedro Rodriguez, it said.

‘Urgent solutions’
If Spain wants to extend its winning streak after the 2010 World Cup crown and the past two Euro championships, coach Vicente del Bosque “will have to seek urgent solutions”, Marca said. “The hardest job will be in maintaining team spirit.”

“It is time to think quickly, draw firm conclusions and make logical changes in the next starting line-up to get back into this World Cup,” wrote Lobo Carrasco in Barcelona sports paper Mundo Deportivo. “Winning it seems almost impossible, but it all depends on beating Chile.”

Spain’s hopes of rescuing their campaign and avoiding the fates of France in 2002 and Italy in 2010 in defending champions going out at the group stage, face a real challenge from highly rated Chile. The South Americans joined the Dutch on three points after beating a stubborn Australia side 3-1 on Friday.

Scale of defeat
A jubilant Van Persie, who scored one of the best goals seen at the World Cup, said the match against Spain was one of greatest football nights for the Netherlands, although even he was shocked by the scale of the defeat.

Spanish goalkeeper and captain Iker Casillas (33) took the blame for what he called his worst night. It was a personal humiliation for one of the stars of the team that won the 2008 and 2012 European Championships and 2010 World Cup.

“I have to ask forgiveness for the match we played in general and me in particular,” Casillas said. “I was not good enough.”

“We didn’t react well to van Persie’s second goal – they were euphoric and they hammered us,” said Spain coach Vicente del Bosque.

“We did everything wrong in the second half, it was a debacle,” added Spain’s veteran midfielder Xavi.

Temperature training
The many critics who discussed the rout at length in late-night television debates said Del Bosque had blundered by not training the squad in higher temperatures with greater humidity.

The Netherlands had been seen practicing vigorously on the sandy beaches of Rio de Janeiro while Spain had come from playing a friendly against El Salvador in Washington DC’s FedEx Stadium to set up camp in Curitiba, where temperatures are around 10°C less than in Salvador, the critics said.

Del Bosque now has until June 18 to address the squad’s shortcomings before a must-win match against Chile in Group B.

“We must overcome the next test as athletes,” Del Bosque said. “We cannot allow ourselves to sink, we need to look forward.”

He said Spain was made up of professionals and “good kids who understand that, although we’ve been hurt by this defeat, there must not be any accusatory glances toward anyone”.

The coach said he had witnessed “an uplifting conversation” in the dressing room, which he described as “good for the team”.

Del Bosque acknowledged he had been surprised by the Dutch attack. “It’s not normal, I can’t find words,” he said, adding that Spain had always managed its defense well, “but today we were weak.” – AFP, Sapa-AP

Ryland James
AFP sports journalist based in Berlin, tweeting about Fussball, Germany, die Mannschaft, Champions League and the Bundesliga. Views my own.