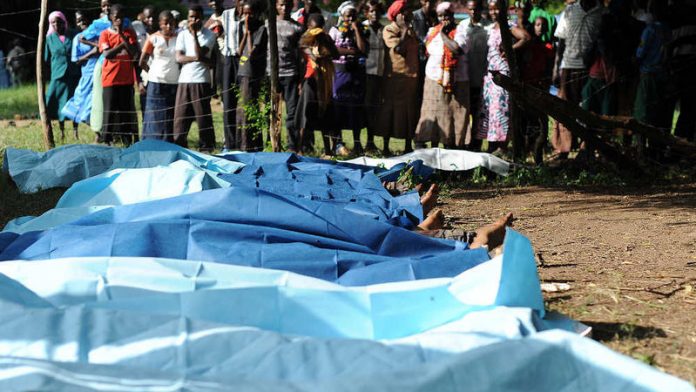 Somali-linked Islamist militants killed at least 15 people and torched houses in a second night of attacks on Kenya’s coast, a day after an assault on a town that left almost 50 dead.

Armed men went door to door hours before dawn in Poromoko village, ordered people outside and made them recite the Islamic creed, said one witness. He did not see what happened to anyone who failed.

Somalia’s al-Shabab militants claimed responsibility for the two days of attacks and said it would continue its campaign in the east African nation, where a rise in militant violence has battered the tourist industry.

The militant group has said it is punishing Kenya for sending troops to Somalia to confront its Islamist fighters.

Sunday’s assault on the town of Mpeketoni was the worst since al-Shabab gunmen stormed Nairobi’s Westgate shopping mall in September 2013, leaving 67 dead.

The new attacks have fuelled mounting public criticism of the government for failing to do more to prevent a string of grenade and gun attacks on the coast and the capital since Westgate. Al-Shabab on Monday declared Kenya a “war zone”, telling tourists to leave the country or stay “at their own peril”.

Kenya has said it will not withdraw its forces from Somalia and has promised to track down the gunmen. “These attacks are unfortunate and the perpetrators must be held accountable,” Interior Minister Joseph Ole Lenku told residents in Mpeketoni, where he was jeered by locals.

‘No action’
The minister said 15 people had died in Tuesday’s assault.

“This government is full of talk and no action,” said one angry resident in Mpeketoni, speaking as the minister arrived in the town. “They keep saying the country is safe, and we keep on suffering in the hands of terrorists.”

Al-Shabab’s military operations spokesperson Sheikh Abdiasis Abu Musab said the group’s gunmen had killed as many as 20 people in the latest assault, including policemen.

“Our operations in Kenya will continue,” he said.

Omar Awadh Salim, a 48-year-old father of two, said masked men in military fatigues broke into his house and other properties in Poromoko just after 1am on Tuesday. “They ordered all of us to get out of the house, and then asked us to recite ‘shahada’. We all did and they let us back into the house and proceeded to the next,” he said.

Ole Lenku has defended his government’s security efforts. But many Kenyans have called publicly for him and other top officials to be fired for security shortcomings including failings during the four-day Westgate siege, where some soldiers involved were found to have looted the mall.

Travel advisories
The tourist industry has been taking a hammering since the violence prompted Western nations to tighten travel advisories for their citizens.

Some hotels on the palm-fringed coastal region say they face closure, while hotels that offer safaris up country say bookings are down by 30% – a worrying sign as the July-to-September peak tourist season approaches.

Buses working on the tourist route from Mombasa to Lamu, an historic Arab trading post that is a popular attraction, said they were struggling to find enough passengers.

“It is not safe to ply the route anymore because you can’t know if attackers will be waiting for you on the road and harm passengers, and besides we also have very few bookings,” said Abudullah Hassan, operations manager at a local bus company.

The Red Cross had put the death toll for the Mpeketoni assault at 50, but on Tuesday said the figure was 49. That number did not include the victims of the latest attack. – Reuters