World Cup 2014: Lack of pace a worry for Brazil 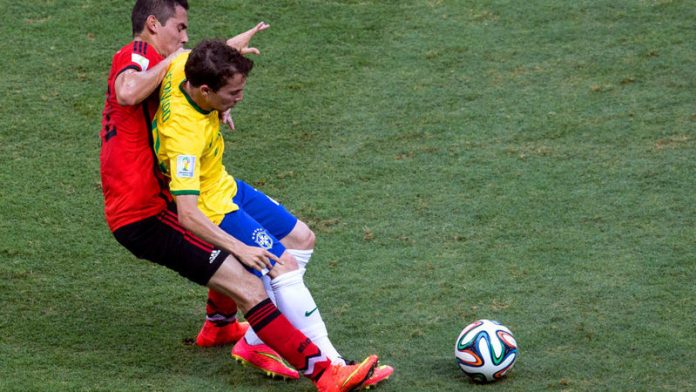 Brazil’s failure to score against Mexico has revived concerns about a long-standing Brazilian issue under coach Luiz Felipe Scolari – a lack of mobility, particularly up front.

Scolari, who led Brazil to their fifth World Cup in 2002 and returned for a second stint in 2012, tried to address the problem at halftime, bringing on Bernard for Ramires.

The 21-year-old winger is one of the fastest players in the squad and beloved by a manager who famously said he has “joy in his legs”.

He also brought on striker Jo for static number nine Fred in the second half.

The changes were not enough to help Brazil overcome an inspired goalkeeping performance from Guillermo Ochoa but they made a difference, according to former World Cup winner Juninho.

“I have one certainty about Brazil’s unfair draw with Mexico,” Juninho wrote in the Lance! sports newspaper.

“When Felipao’s team play with more mobility they tend to create more chances. The entry of Bernard and Jo in the second half left Brazil speedier and with more alternatives.”

Worried about Fred
Although Brazil have Neymar, who can run at defences like few other players in world soccer, and the nippy Oscar, critics have long worried over Fred.

The Fluminense forward can score goals but he is a slower, more old-fashioned centre-forward who lurks in and around the penalty area.

Brazilians are also fretting over the form of Paulinho, the midfielder who was brilliant in the Confederations Cup triumph last year.

Paulinho won the bronze ball as the third-best player of that tournament, but Brazil have not seen his box-to-box running game in their first two matches.

Hulk, who missed the Mexico game because of a thigh injury, is expected to return for Brazil’s final Group A match against Cameroon. – Reuters