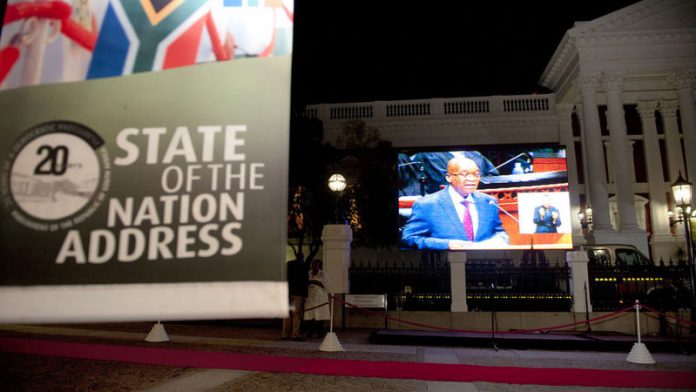 In the wake of a credit ratings downgrade and just as power utility Eskom announced it was beginning emergency load shedding, President Jacob Zuma delivered a second State of the Nation Address (Sona) for 2014, which garnered mixed reactions.

Critics expressed concern that Zuma’s speech revealed limited appreciation of the pressure government was under to retain a tight rein on its finances, following declining economic growth in the first quarter of the year.

Other concerns included his failure to overtly address the investment climate, in the light of the downgrade of South Africa’s credit rating by Standard & Poor’s and the change in the outlook from stable to negative by Fitch. This came against a backdrop of the ongoing strike in the platinum belt, which after months is still without final resolution, further eroding investor confidence.

Despite expectations that Zuma would do more to outline the implementation of the National Development Plan (NDP), it did not receive wide attention in his speech.

Rather, Zuma focused on plans to embark on “radical socioeconomic transformation” to push back poverty, unemployment and inequality.

As part of this process Zuma announced that, in line with the ANC election manifesto, the state would investigate the introduction of a minimum wage, convened by Deputy President Cyril Ramaphosa, within the National Economic Development and Labour Council. Zuma also highlighted the “repositioning” of the country’s development finance institutions. The investment impact of these bodies, despite having R230-billion in assets, had not been “broad-based” enough, while their investment programmes were not well co-ordinated.

Key constraints
Zuma said that the “low level of investments is a key constraint to economic growth”, and called on the private sector to show “as much confidence in the economy as the public sector”.

The administration would continue to engage business on promoting inclusive growth and he would soon convene a meeting of the presidential business working group, he said.

The concentration on energy was also very important, Business Unity South Africa’s (Busa) acting chief executive Cas Coovadia noted, particularly progressing the Independent Systems and Market Operator Bill – which outlines the restructuring of the electricity sector, plans to examine the mandate of state owned enterprises such as Eskom and getting the fourth phase of South Africa’s renewable energy power project under way.

The focus on local government was also positive, said Coovadia.

It was “interesting” that the NDP was hardly mentioned, said Coovadia. But business would take the view that the speech was “in the context of the NDP”, and Busa would operate based on this assumption in its interactions with government, he said.

Support for Eskom
The president’s comments on the energy sector were the most positive aspect of Sona, according to Pietman Roos, senior policy consultant at the South African Chamber of Commerce and Industry (Sacci).

Zuma re-emphasised the potential both nuclear and shale gas offered South Africa. He said the National Nuclear and Energy Executive Co-ordinating Committee of Cabinet was in the process of being converted into a Cabinet subcommittee.

The subcommittee would be responsible for the direction of energy-sector activities, including ensuring “that Eskom receives the support it requires to fulfill its mandate”. The utility is battling supply constraints and extensive delays on new power stations, and faces a R225-billion funding shortfall. Eskom, along with other state-owned entities such as the South African Nuclear Energy Corporation and the Central Energy Fund, would have to adapt to “redefined roles” to achieve security goals, Zuma said.

The growth of people benefiting from the employment tax incentive scheme – which has now reached 133 000 – was a “pleasant surprise”, said Roos.

He said there were insufficient details relating to other issues.

Mining, infrastructure
Renewed efforts to address the unrest in the mining sector through the Framework Agreement for a Sustainable Mining Industry was positive, he said, but it remained to be seen where talks would lead.

There was no priority given to different policy directives, argued Roos, while insufficient attention was paid on ways to improve the investment climate, he argued.

Despite highlighting the presidential infrastructure co-ordination commission’s work, a common criticism was how little of the funding for the commission was new.

Other analysts believed, however, that the speech offered very little in the way of steadfast implementation.

Wishlist
The government’s proposals to address the problems facing the mining sector and mining communities came across as a “wishlist masquerading as policy”, argued Van Staden.

Talk of further investment in social welfare suggested that government did not appreciate that it would amount to increased expenditure, while there was insufficient detail provided on how the country could attract more investment to generate the money to support this, he said.

This concern also extended to employment creation efforts, such as the proposal that each government department increase its internship positions. “That’s more money,” said Van Staden.

There was little acknowledgement of “big issues” that the ratings agencies warned of: rising government and current account deficits, and government debt.

“I don’t know what you could find encouraging about this,” said Van Staden.