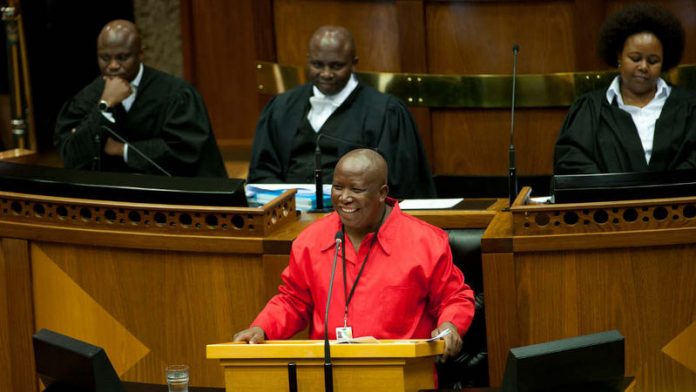 It is going to be a very long five years for President Jacob Zuma and his ANC government if Julius Malema’s maiden speech in Parliament is anything to go by.

Customarily a maiden speech is not controversial by nature and other members then refrain from making interjections, but not with Malema. He was one of 22 MPs, seven of whom are new to Parliament, who took part in the debate on Zuma’s State of the Nation address on Wednesday and he certainly stole the show.

The Economic Freedom Fighters (EFF) leader launched a scathing attack on Zuma and managed to raise the ire of many others in the National Assembly chamber as he questioned the entire negotiated settlement that brought an end to the apartheid regime and ushered in a democratic dispensation.

Chairperson of the National Council of Provinces Thandi Modise, who was presiding over the session for the first time, had her hands full as several MPs raised numerous points of order against Malema.

He accused the ANC government of killing miners in Marikana in August 2012. When challenged by an ANC MP and ordered to retract, he refused and reiterated the statement.

Factional accusations
Speaking about his nemesis, South African Communist Party general secretary Blade Nzimande, he at first he did not refer to him as an “honourable member” and then spoke about Nzimande’s factional battles with former President Thabo Mbeki.

When Modise cautioned him on this, saying he couldn’t accuse MPs of being involved in factional battles, Malema stood his ground and steadfastly retorted: “No, Madam Chair, I don’t agree with that. You are not going to tell me how I must debate. No, I can’t be told what to say.”

Malema had nothing good to say about Zuma’s speech. “Mr President, when you spoke yesterday you reaffirmed this belief that indeed we have chosen the correct path because you no longer represent the hope of the hopeless masses of our people.

“Your speech was uninspiring and lacked a central theme,” he said.

“No one will remember what you said last night, except that we should clean on Mandela Day, which was the only emphasis you made and because you thought it was the simplest subject you had to deal with in the whole speech last night. Your cleaning instruction goes against the wishes of president Mandela, who said it must be left to an individual’s choice how they wish to remember him or celebrate his life.”

‘Sold out the revolution’
Malema went on to reveal that he will not be cleaning, but will be involved “in more productive activities which will leave a more lasting legacy”.

Malema charged that there was nothing radical about Zuma’s speech, especially when it came to economic transformation. “You and your party should stop playing semantics, especially when it relates to radical economic agenda, because you lack courage and you have sold out the revolution.

“You don’t have what it takes to lead a struggle against economic emancipation of black majority, particularly Africans. You are extremely scared of white people, particularly white monopoly capital,” raged Malema, while blaming an “elite pact” that was forced on people in 1994, which does not allow for radical economic transformation and changes.

He concluded his speech with a SePedi idiom: “Mr President, le ha o ka e tema metse o tla bona e nwile [even if you deny an animal water, it will still drink],” suggesting that the EFF will be unstoppable.

But Malema was to get as good as he had given.

ANC comeback
ANC MP Yunus Carrim addressed the EFF directly in his speech and even offered advice to its youthful MPs. “It was long ago, will the EFF note, long before this party surfaced to claim the economic space solely for itself, that the ANC members under the most brutal conditions of apartheid and under huge personal and collective cost waged the struggle for economic freedom.

“The struggle for economic freedom is an endemic part of the national liberation struggle,” said Carrim.

Carrim said that by the radical phase of transition, the ANC preferred to more directly and systematically address the structural constraints of the economy and more decisively tackle the challenges of poverty, unemployment and inequality in society.

Turning to Malema: “He [Malema] began his maiden speech by speaking on behalf of the indebted in South Africa; of course he carefully forgot to speak on behalf of his debt to the South African Revenue of Services.

“On Nelson Mandela Day, I suggest, my comrade colleague, you clean up your own indebtedness, rather than exercise your mediocre carpentry skills on a school building,” said Carrim to loud applause.

Carrim urged the EFF to find a role that it can play in the second phase of the transition – despite the political differences with the ANC. “We invite you to find your role and play it to the fullest in the interest of the country. This applies even more to the EFF, because on average you are younger. The future is for the youth,” said Carrim.

“I greet the Honourable President, it is good to have you back in good health,” he began his speech, which was later described by Carrim as “the same old lamentations, same old suburban whining and well-coached culture of pessimism”.

Maimane had acknowledged the strides made by the ANC government over the past 20 years, some of which he admitted to have benefited from. “But, where are the jobs?” he wanted to know.

“One-third of our people can’t find work. The youth of South Africa are worst affected by unemployment with nearly four in 10 without a job. And yet the extent of the unemployment crisis received no mention in the president’s address. How can he say we are a nation at work, when millions of people are, in fact, out of work?” said Maimane.

Maimane said that while this country had potential and its economy should be creating jobs and creating wealth for all South Africans, it was faltering because of policy uncertainty. “And I am afraid that the president did nothing last night to provide any clarity.”

Maimane also lamented the fact that Zuma established a new ministry last month – that of small business, but gave absolutely no details about it in his address.

Maimane called on Zuma to come clean on the economic crisis, on job creation, on the electricity crisis, on failing education, on the public protector’s report into Nkandla and on the national director of public prosecutions, which he did not do in his address on Tuesday night.

ANC MPs, one after the other, sought to defend Zuma and the ANC’s record while expanding on Zuma’s announcements.

Zuma will have the opportunity to respond to the debate on Friday.