Germany’s lack of a ‘tough guy’ nearly costs them again 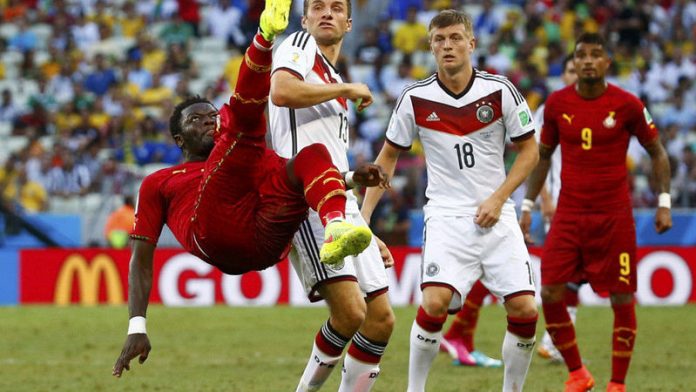 Germany’s 2-2 draw against Ghana on Saturday once again exposed the team’s lack
of a true leader, a charismatic player who will take charge when the chips are down.

Exciting, dominant, and entertaining as they often are, Germany’s lack of a “go-to” player in times of trouble has haunted them through the last two World Cups and two European championships.

After bright runs through those four tournaments, they were soundly beaten in one final, at Euro 2008, and three semifinals.

That lack of an inspirational leader almost cost them dearly again in their Group G match against Ghana on Saturday before two players with a combined age of 65 came off the bench to save the day.

With Germany suddenly and shockingly trailing Ghana 2-1 thanks to a pair of defensive blunders – one from captain Phillip Lahm – Miroslav Klose and Bastian Schweinsteiger turned the game around when they got on the pitch in the 69th minute.

Klose got the equaliser with his first touch less than two minutes later to avert what would have been a humiliating defeat to Ghana in what is arguably the World Cup’s toughest group.

“They both came in and enlivened the match right away,” a relieved Loew told German TV. “The team showed strong morale to come back after we were down.”

But where was the strong leader?

Ghana’s Kevin-Prince Boateng stuck his finger in the wound before the match when he said Germany’s problem was it lacked a “Typen” – tough guys who take charge.

Boateng was once such a “tough guy” and natural leader for the nation’s under-21 team but he was a bit too much of an independent spirit for Germany’s liking.

With such a deep pool of talented players to choose from, the German FA (DFB) tends to promote those with squeaky clean images who stick to what might be called the “corporate line” – stay modest, stay out of trouble, and don’t criticise anyone.

Boateng read the writing on the wall and so switched allegiance to Ghana.

His criticism before Saturday’s match certainly struck a nerve in Germany.

For years, fans and football pundits have been warning about the perils of not having someone to look to in tight spots – a leader in the mould of Michael Ballack, Oliver Kahn or Stefan Effenberg.

The nadir for Germany came in a qualifying match in 2012 against Sweden in Berlin.

Germany were leading 4-0 well into the second half but ended up with a 4-4 draw – and smouldering criticism at home about a lack of leadership on the pitch.

Before Saturday’s match, a television camera captured Loew and Boateng standing next to each other in the tunnel before going on to the pitch.

Loew kept glancing at Boateng out of the corner of his eye but Boateng stared straight ahead, essentially ignoring the Germany coach. – Reuters