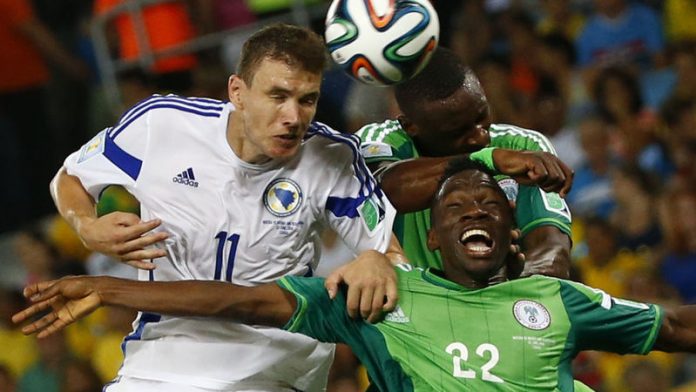 Nigeria beat Bosnia 1-0 on Saturday to record their first World Cup finals victory since 1998 and condemn the European team to an early exit in their first appearance at the tournament.

Peter Odemwingie’s 29th-minute goal lifted the African champions to four points from two games, two less than Argentina who they meet in their final Group F match on Wednesday with top spot at stake.

“It’s been 16 years and no wins for our country so we are very excited,” Odemwingie said in a television interview.

“We needed the win. They have some fantastic players so we are happy to bounce back after what our people thought was a poor performance in the first game [a 0-0 draw with Iran].

“Victories affect people in different ways so we are looking up now and if we get into the second round anything can happen. Maybe we will be inspired as we were in the last African Nations Cup.”

Iran are third in the standings with one point and could reach the last 16 if they inflict Bosnia’s third defeat in a row in their final group match and Nigeria lose to Argentina.

Nigeria took the lead when Odemwingie fed Emmanuel Emenike on the right wing and raced into the box to receive the striker’s low return before sweeping the ball under goalkeeper Asmir Begovic.

The Bosnian bench angrily protested that Emenike had fouled captain Emir Spahic as he bundled past him into the box before making his cross.

The tournament newcomers had earlier been denied a goal after a poor offside decision against striker Edin Dzeko after he ran on to a through pass and beat goalkeeper Vincent Enyeama in the 21st minute.

“I did not see the situation, I was told there was no offside but this was not the first or last refereeing mistake,” Bosnia coach Safet Susic told reporters.

“I don’t want to discuss that right now. We lost to a good team who played much better in this match than against Iran,” he added.

“They scored that goal and they won deservedly, I can only congratulate them and I have nothing further to add.”

Dzeko had another shot saved by Enyeama but he was well off target with chances later in the half as he fought a lonely battle with the Nigeria defence.

The more experienced Nigerians, playing in their fifth World Cup, created several chances in the first half but were let down by the final pass, poor control or wayward shooting and a couple of smart diving saves by Begovic.

The Bosnia keeper, a teammate of Odemwingie’s at Premier League club Stoke City, made a string of saves, denying Emenike and midfielder Ogenyi Onazi to keep his side in the match in a second half of end-to-end excitement.

Dzeko nearly stole an equaliser for Bosnia, his shot in a goalmouth melee hitting Enyeama’s legs and coming back into play off the post deep into stoppage time.

Nigeria coach Stephen Keshi was rewarded for his adventurous tactics while Susic packed his midfield as he had done in the 2-1 defeat by Argentina and only sent on a second striker in Vedad Ibisevic, whose best headed effort went over the bar, for the last half hour.

Just before the Nigerian goal, Enyeama had parried a shot from midfielder Miralem Pjanic and the ball rebounded into the middle of the box but no Bosnian player was following up to take advantage. – Reuters