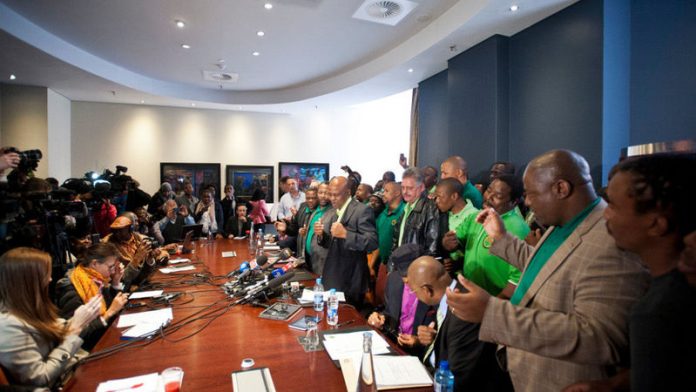 Association of Mineworkers and Construction Union (Amcu) members in the platinum sector are expected to return to work on Wednesday after their historic five-month strike.

Amcu and the platinum producers signed an agreement to end the strike on Tuesday at Lonmin’s offices in Melrose Arch, Johannesburg.

Union shop steward at Impala Platinum, Abram Seaketso, said everyone was excited that they were going back to work.

“Clearly there are no winners in this strike,” Lonmin chief executive Ben Magara told the media which gathered outside the company offices on Tuesday afternoon.

But Amcu appeared to feel differently as, just minutes later they danced and sang into their press briefing to discuss the details of the freshly signed three-year wage settlement between the two parties which has brought an end to a five month-long strike in South Africa’s platinum sector.

Magara – flanked by the chief executives of Anglo American Platinum and Impala Platinum with equally sombre expressions on their faces – said the signing of the agreement signified the beginning of rebuilding the businesses which had been adversely affected by labour protests since January 23 this year.

“This is only the first step,” Magara said. “It is not necessarily a time for celebration. Clearly there are no winners in this strike.”

Asked whether Amcu had won, the jubilant union president Joseph Mathunjwa responded: “NUM [National Union of Mineworkers] concluded [previously] a two-year agreement for R400 each year. Amcu have concluded a three-year agreement with R1 000 each year. You can draw the conclusion,” he said emphatically.

The wage deal will see “a significant number” of Amcu members reaching the R12 500 basic wage by the end of the three years and basic wage will be no less than R8 000. Some workers will receive an increase of up to 20%. “We believe this is a dignified settlement,” Mathunjwa said.

Advocate Dali Mpofu, who sat alongside Amcu leadership at the press briefing, said “the real winners here are the workers,” and commended Amcu on their leadership through very difficult times. “Other unions will have something to learn from you,” he said.

Asked about whether the companies would now restructure, Mathunjwa said that retrenchment has its own processes but that the union had received no notices. “The focus should be on this wage agreement,” he told media.

According to the companies, as detailed in their official statement, the wage agreement provides for:

The signing of the deal took two hours as media flocked outside Lonmin’s Melrose Arch offices waiting for the parties to appear. The delay was as a result of minor discussion points and changes said spokesperson for the companies, Charmane Russell. “These things happen,” she said.

Magara and the other executives did not take questions as they had run behind schedule, but Magara, on behalf of all three platinum companies, thanked those who had been involved in the negotiation processes and the loyal workers who had suffered as a result of the strike.

The companies said the priority was now to bring the employees back to work and begin the process of issuing medical certificates and assessing underground environments in order to begin restocking pipeline and ramping up to full production.

Magara said the companies would provide financial planning assistance to help those dealing with high levels of indebtedness. He said there was still work to be done to improve the living conditions of mineworkers: “Basic salary alone is not going to do that.”

Mathunjwa said the strike, although protracted, was necessary, and the union leadership was encouraged and motivated by the resilience of their members.

The Amcu president said this wage offer was the first to address structural difference and “in our view this is a victory for all workers in South Africa”.

He said that the struggle for higher minimum wage existed at other mines and in other sectors where the union would be happy to recruit and represent as long as it remained within their constitutional right to do so. – Additional reporting by Sapa