Suarez takes a bite out of life 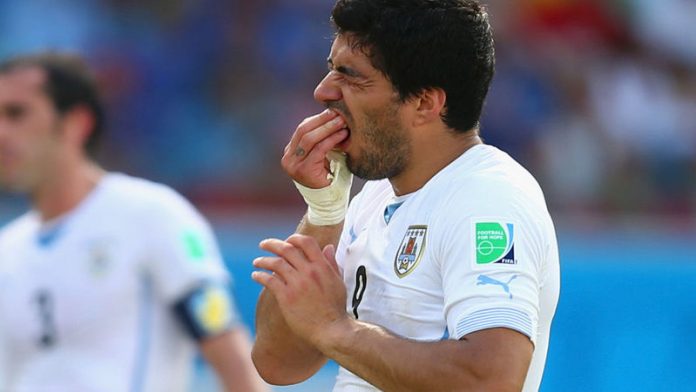 Uruguay’s Luis Suarez started off small on his carnivorous journey in the Dutch league. In 2010, his developmental years, while playing for Ajax he tasted an opponent’s right ear – similar to when Tyson made an appetiser out of Evander Holyfield’s ear. Suarez was banned for seven games and we all thought he’d learnt his lesson. But does a vampire ever change his cape?

Afraid not. At the 2010 World Cup in South Africa, the hand of Suarez denied Ghana and Africa its first semifinal place when he thought he was the goalkeeper. Suarez palmed the ball off the goal line. He was red carded. Incredibly Ghana’s Asamoah Gyan skied the resultant penalty and the cretin Suarez was caught celebrating on the sidelines. Ghana went on to lose on penalties and millions of African hearts broke simultaneously. Oh, and Suarez said he’d do it again.

But the rump chaser from Salto, Uruguay, didn’t stop there. In 2011 he added racism to his repertoire of miscreant behaviour. He racially abused Manchester United’s Patrice Evra and was banned for eight games. The suave Suarez insisted that what he said wasn’t racist, and refused to shake Evra’s hand when he returned from his ban.

The depths of his charm know no end, because in 2011 he gave Fulham fans the middle finger. He was banned for one game, which was just a long weekend in Suarez’s world.

A new year and one would expect the meat man to change his diet, but “no way Jose. No es tan!” In 2012 Suarez reacted to accusations by then Everton coach David Moyes of diving by celebrating his like this … faking a dive right in front of the Everton bench. Told you he was a charmer.

Now Suarez may be a consummate professional at diving but even the best thespians get it wrong, like he did against Stoke in 2013. Just call him the Black Swan.

Also in 2013, Suarez proved that he is more versatile than we gave him credit for – punching a Chilean in what is known as the South American bantamweight bout. Trouble is, it was a World Cup qualifier and they were on a soccer pitch.

2013 was a vintage year for Luis “The Bite” Suarez. He booked a place in the Chelsea penalty box for a snack. On the menu? Defender Branislov Ivanovic’s forearm. He took a bite out of life and was banned for 10 games. Later, Suarez complained about finding hair in his food.

Once Suarez acquired a taste for defenders there was no stopping him, and this resulted in The Hannibal Lector of Liverpool crowning achievement, sampling an Italian dish in Giorgio Chiellini. Shoulder piece – very rare.