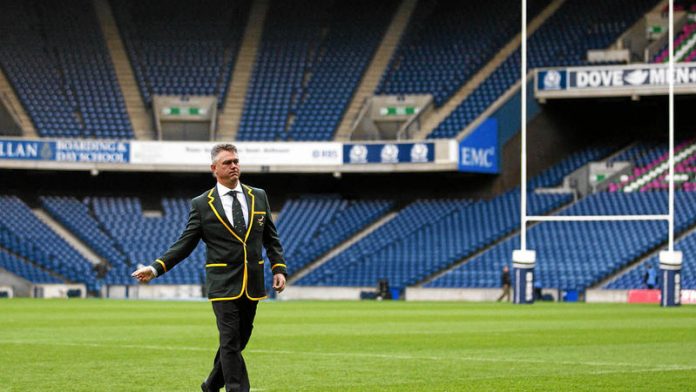 The final Springbok Test of the June international window takes place in Port Elizabeth on Saturday. Somewhat confusingly, June 28 is deemed by the International Rugby Board to be outside the window, so coach Heyneke Meyer has a denuded squad to select from.

He is reaping the whirlwind he created by selecting so many overseas-based players, seven of whom are now unavailable, although he may originally have felt that this week’s opponents, Scotland, could be seen off without his full-strength team.

That perception has been altered slightly by Scotland’s unexpected 21-19 win against Argentina in Cordoba at the weekend. Perhaps it is unkind to say “unexpected”, since the Scots continued their unlikely form line by winning for the fourth time in Argentina in recent years. The required pinch of salt pertains, however, since the Pumas, like the Boks, selected a team missing many first-choice players.

In the long run, Meyer’s hand will be strengthened by the artificial constraints placed on him. With the World Cup 15 months away, he needs to know that he has strength in depth across the squad. Moreover, given the noises emerging from the minister of sport over the past six months, he needs to give consideration to transformed match days.

The figure of 60% black and coloured representation has been bandied about, although the South African Sports Confederation and Olympic Committee (Sascoc) last week proclaimed itself happy with the South African Rugby Union’s (Saru’s) attempts at transformation.

Sascoc chief executive Tubby Reddy said: “We are pleased with the submissions made by Saru … They are clearly focused on creating opportunities for all the people of our country. However, we noted that there is still a lack of transformation in the Springbok team hence the perception that Saru isn’t transformed or has no intention to transform. It’s clear that over the last 20 years … we have not sufficiently addressed the implementation process to realise the transformation agenda.”

That seems to suggest that the provinces and franchises will be put under pressure sooner rather than later, as has happened recently in cricket. The long-term aim is to give the national coach a far wider choice of players of colour from which to select. If Meyer was to be ordered before this week’s Test to make a 60% selection, he would have a match-day 15, including a minimum of eight players of colour, that might look something like this:

Pleasing no one
The trouble as always with being politically correct is that in trying to please everyone you end up pleasing no one. The above selection, drawn as it is from those who have been part of Meyer’s squads this year, includes several players who are out of form (Kolisi), out of position (Sithole) or injured (Ntubeni).

Then there is the thorny issue of the bench, which has to be selected with the thought that the 8/7 split in the run-on side must be maintained through the hurly-burly of injury and substitution. Now comes the real dilemma, for the coach needs to find the third-best prop and flank of colour in the country, then back-ups for the threequarter line.

Exactly how deep the coach needs to dig is exemplified by the call-up to the squad this week of young Sharks lock, Stephan Lewies. A matriculant at Eldoraigne Hoërskool, Lewies is just out of nappies in senior rugby terms, but finds himself in the squad with the unavailability of the likes of Pieter-Steph du Toit, Eben Etzebeth, Bakkies Botha, and Franco and Flip van der Merwe.

In physical terms, Lewies is clearly ready for the contest, but the question that Sascoc and others are fond of asking is, were he isiXhosa-speaking instead of Afrikaans, would he have been so blithely added to the squad? Giant Mtyanda of the Pumas is a lock of similar proportions to Lewies, who hails from the New Brighton area of Port Elizabeth. It is easy to imagine the outrage that would have ensued if Mtyanda had been called up this week.

It raises the issue of tokenism. Mtyanda has been performing consistently well for the Pumas in the Vodacom and Currie cups but he is not part of a Super Rugby franchise.

For the national coach to look outside of the franchises immediately raises red flags. These are the issues that provincial coaches have been grappling with for years and we haven’t even mentioned the psychological effect on players who are the recipients of so-called quota selections.

All of this will be forgotten, or at least pushed to one side, if the Boks carry on winning and, notwithstanding the problems encountered against Wales in Nelspruit last week, they should be too good for Scotland, whatever 15 eventually takes to the field – that’s despite the fact that they have struggled against the Scots before and that the visitors have won their three matches on tour against the USA, Canada and Argentina.