EFF spreads its wings to Namibia 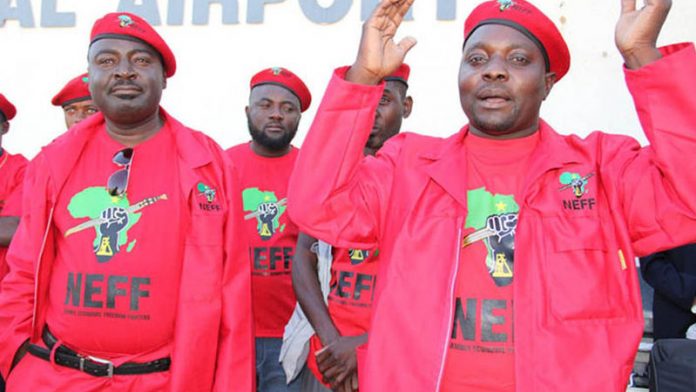 The Economic Freedom Fighters (EFF) of Julius Malema has spread its wings to Namibia, with the formation of a populist movement sporting red berets, using military ranks and demanding nationalisation of all the land in that country.

The Namibia Economic Freedom Fighters (NEFF), launched in Windhoek this week, said it is strongly opposed to homosexuality and believes that the country’s resources should be held by its indigenous inhabitants.

In keeping with this stance, it has criticised the economic influence of Chinese and Indian entrepreneurs in Namibia, claiming that the Namibian government is empowering them.

One of the movement’s founders and its “second commander-in-chief”, Kalimbo Ipumbu, said in a telephonic interview on Wednesday that the NEFF has yet to be registered with the Electoral Commission of Namibia. It plans, however, to run in Namibia’s presidential and national elections, set for November this year.

He confirmed that a delegation of the party travelled to South Africa last week to meet Malema for an “information meeting”.

Ipumbu said that Malema had played no role in launching or providing funds for the Namibian party, but that the two organisations share “certain concepts of nationalisation, economic emancipation and land redress”.

He added that the movement had received funds from an anti-homosexual organisation based in Ghana. “We will help traditional authorities to root out homosexuality by spreading a message that it is not cultural,” Ipumbu said.

Radical and revolutionary
Ipumbu would not reveal the name of the Ghanaian funder. A report in the Namibian said the organisation had donated R2.7-million to the NEFF.

In a media release announcing the launch on Tuesday, Namibian activist Phil ya Nangoloh described the NEFF as a “radical and revolutionary political party”.

“NEFF leaders are arriving today [Tuesday] from South Africa where they have been exchanging ideas with their South African allies, led by radical South African leader Comrade Julius Malema,” he said.

Ya Nangoloh said he was not a member of the NEFF, but that party leaders had approached him to announce the launch because of “fears of possible harassment”.

Ipumbu declined to provide details about consultative meetings the movement had held with the EFF in South Africa over the past two weeks, which also involved its “commander in chief”, Epafras “Mokassa” Nukwiilongo.

He said the Namibian nation had mandated him and his fellow leaders to form the party, which he claimed would take drastic action against the “practice of imperialists influencing political leaders”.

However, a source close to the NEFF leadership told amaBhungane that the NEFF has the particular backing of the “Omusati clique” in Namibia’s ruling party, Swapo. Omusati is a region in the Oshiwambo-speaking north of the country.

Challenge the ruling party
The aim, the source said, is to ensure that current Prime Minister Hage Geingob is weakened as the heir apparent to the presidency, and will not succeed President Hifikepunye Pohamba, by ensuring that Swapo wins less than a two-thirds majority in the November election. Geingob is from the non-Oshiwambo-speaking Damara ethnic group.

Ipumbu dismissed the allegations. “We, like any other party, are just out to challenge the ruling Swapo party for the benefit of the nation,” he said. “We don’t want to loosen the ruling Swapo government. It has loosened itself by its own activities.”

The NEFF’s Nukwiilongo is a well-known businessman from the Omusati region. Ipumbu was the youth wing secretary of the opposition Congress of Democrats until 2008.