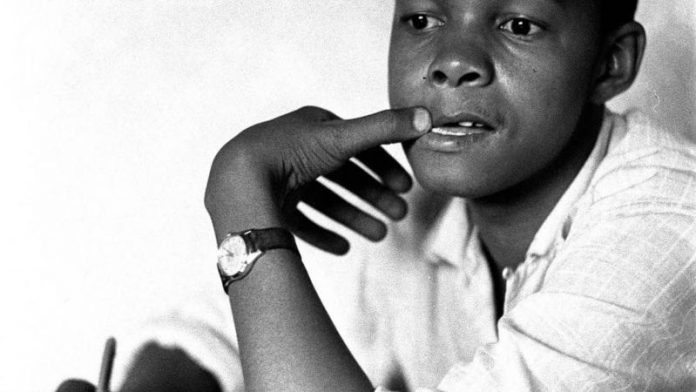 “You are either alive and proud or you are dead, and when you are dead, you can’t care anyway. And your method of death can itself be a politicising thing. So if you can overcome the personal fear of death, which is a highly irrational thing, you know, then you are on the way.”

When Steve Biko said this in 1977, could he have known that these were perhaps the very sentiments that Nathaniel “Nat” Nakasa might have held before he plunged to his death at the age of 28 from a high-rise apartment building in New York 14 years before?

Ndazana. That’s the name Nakasa was known by in his hometown of Chesterville, in the then Natal. I first met him in the library halls of a university I was attending in the mid-1990s, while reading towards a degree in economics.

I met him in the form of a book, The World of Nat Nakasa, edited by Essop Patel, which contained a stinging introduction by Lewis Nkosi. I say stinging because Nkosi brutally exposed the many flaws in Nakasa’s work. His political ideas were inchoate, he said. But still, I found the man’s work refreshing for the times in which he wrote.

In Ryan Brown’s 2013 biography Native of Nowhere, Nakasa wrote in 1964: “Some time next week, with my exit permit in my bag, I shall cross the borders of the Republic and immediately part company with my South African citizenship. I shall be doing what some of my friends have called ‘taking a grave step’.

“For my part, there is nothing grave about it. You needn’t even be brave to take the ‘step’. It is enough to be young, reckless and ready to squander and gamble your youth away. You may, I dare say, even find the whole business exciting.”

Shy, serious and quiet
For the record, Nakasa was a journalist educated in Durban. He started working at Ilanga lase Natal in the 1950s. He then moved to Johannesburg, where he wrote for Golden City Post, the Rand Daily Mail and Drum magazine, covering many of the social ills of the time. Nadine Gordimer, the novelist and a former friend of Nakasa’s, remembers him in Ronald Suresh Robert’s unauthorised biography of her, No Cold Kitchen, as having been a shy, very serious, quiet fellow, who also had a fondness for jazz.

It was in 1964 that Nakasa was awarded a Nieman fellowship to study in the United States, but he was not issued with a passport, which meant this “native of nowhere” would be leaving his country forever.

What I discovered between the pages of The World of Nat Nakasa was revolutionary stuff; the stuff of which great writers are made.

Not long after that, I discovered Canodoce “Can” Themba, whose work in books such as The World of Can Themba, or the evergreen The Suit, which is still performed on stage, was more mature and refined compared with Nakasa’s. No wonder he was awarded, posthumously, The Order of Ikhamanga in Silver for literature. I went on to find Todd Matshikiza, whose Chocolates for My Wife I still return to from time to time, and then Es’kia Mpahlele’s Down Second Avenue, Bloke Modisane’s Blame Me on History, Lewis Nkosi’s Mating Birds, and a whole world of literature by what we now call the “Drum generation”.

But it was Nakasa who opened up that world for me. Even my daughter, Natalie, whom we call Nat, is named after the man. It is for this reason that the news of his homecoming greatly excited me!

‘Tireless efforts’
At the annual South African National Editors’ Forum (Sanef) Nat Nakasa Awards Dinner held at the Taj Hotel in Cape Town on June 20, the new minister of arts and culture, Nathi Mthethwa, said: “I am aware of the tireless efforts spearheaded by the media fraternity, particularly Sanef, to ensure that Nat Nakasa’s name remains engraved as part of the public memory. Since the establishment of the Nat Nakasa Award for Courageous Journalism in 1988, we have had a constant reminder of the need to return Nakasa’s remains to home soil.”

Over the past two years, the department has been working with the KwaZulu-Natal premier’s office and the Ethekwini Municipality, in an effort to repatriate Nakasa’s remains. In 2012 the department sent a delegation to the US to embark on a fact-finding mission, investigating the viability of Nakasa’s reburial on home soil. Since then the Supreme Court for the State of New York has granted permission for the exhumation and repatriation of Nakasa’s remains. When the process is finalised, Nakasa will be reburied at Heroes’ Acre in Chesterville.

But what is the significance of this homecoming? Significantly, in the Republic of South African Letters, where would we place Nakasa’s canon, or oeuvre, however slim it may be, when its total weight is considered and weighed against that of his contemporaries?

In his essay, The Cry of Winnie Mandela: Njabulo Ndebele’s Post-apartheid Novel, David Medalie writes: “Njabulo Ndebele has never been inclined to let South African writers off lightly or to allow them the comfort of small ambitions. He has always been a proponent of a far-reaching literature which serves more than its own time.”

When we look at the work of Nat Nakasa, can we, without fear of contradicting ourselves, say that his work was far-reaching? Or is one here asking the wrong kind of question?

Could it be, perhaps, that at issue is our own romanticism with the notion of exile and a young death in exile? Could that be it? Or is there something more fundamental? Is there something in the writings of Nakasa we are missing?

“He wrote that way, and in those days, even just writing that way was seen as revolutionary. He was a young man with a lot of growing up to do, which unfortunately did not happen.

“While the politics of the time demanded revolutionary fervour, he was into dialogue and finding the good people on the other side. His naiveté around race issues came to the fore when he reached America and found the bastion of freedom being nothing more than a seriously racist state that oppressed black people.

Todd Matshikiza, along with Can Themba, changed the face of journalism in South Africa in the 1950s and 1960s.

“So,” says Tsedu, “I am inclined to agree with the assessment of Lewis Nkosi. But still, he [Nakasa] was a courageous person who refused to stay in the designated township and defied the laws his own way. And I think it is the fact that he died out there in the cold beyond that has elevated him above more serious writers like Henry Nxumalo.”

In The World of Nat Nakasa, Gordimer writes that: “The truth is that he was a new kind of man in South Africa; he accepted without question and with easy dignity and natural pride, his Africanness, and he took equally for granted that his identity as a man among men, a human among fellow humans, could not be legislated out of existence.”

‘Complex person’
Another journalist, Fred Khumalo, who spent a lot of time researching the work of the writers of the Drum generation for a film that in the end did not materialise, has this to say: “Nakasa was a rather complex person, and his personal circumstances quite tragic.

“It is rather unfair to compare him to the others like Nkosi, Mphahlele, etcetera. As individuals, we respond in disparate ways to circumstances that we are faced with. Some are stronger than others.

“And then something my mother told me about him; they grew up together, and at some stage went to the same school. He was slightly older than my mother, but Chesterville being the tiny township, and close-knit community that it was, almost everyone knew everyone’s business.

“Ndazana’s mother was mentally ill. Mental illness, my mother said, ran in the family. When they heard he had committed suicide they quite simply attributed it to the malady.”

Gladys Maphumulo, Nakasa’s surviving sister, does not believe that Nat died because he was mad but she does say that something was seriously wrong, because Nat had sent them dollars before he had died.

Mental illness
She says he wouldn’t possibly have done that if he was going to kill himself, though she does concede that there was a history of mental illness in the family. Their father, Chamberlain, had been institutionalized for 38 years. Their mother had died of a mental illness-related disease.

“But the thing that killed Nat was his work,” she said. “And we always felt, as a family, that that would be his undoing. But we are glad, however, that we will finally have a proper funeral when his body finally arrives here.”

He could well have been writing about Nat, son of the African soil.

In the original article, we mistakenly referenced a Steve Biko’s quote from 1978. In fact he said this in 1977 not long before his death. We apologise for the error.

‘Welcome back home’ – The return of Nat Nakasa

Nat Nakasa remains to be returned to SA