Editor’s arrest a ‘warning’ for Moyo 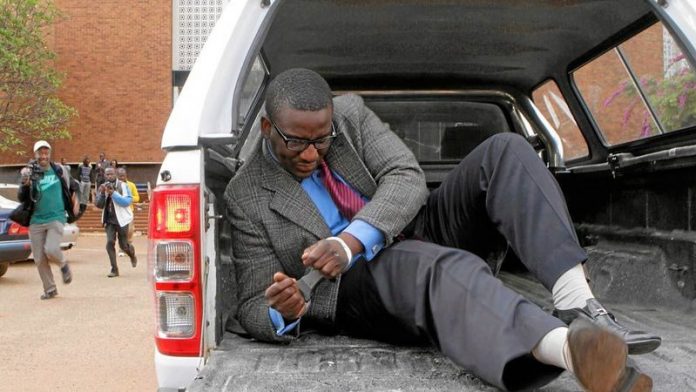 The Zanu-PF faction led by Vice-President Joice Mujuru, which is at odds with Information, Media and Broadcasting Services Minister Jonathan Moyo, appears to be winning the battle to silence him.

The arrest of Sunday Mail editor Edmund Kudzayi, believed to be close to Moyo, is seen as a clear warning to the information minister.

Kudzayi, who worked as one of Zanu-PF’s campaign strategists during last year’s elections, is facing charges of “attempting to commit an act of insurgency, banditry, sabotage or terrorism” and “subverting the constitutional government”. If convicted, he could be jailed for life. On Monday, Kudzayi appeared at the Harare magistrate’s court in leg irons, which were later removed.

At his initial court appearance on June 21, at which he was remanded in custody until July 7, anti-riot police packed the court room in anticipation of protests from sympathisers.

Baba Jukwa
The state is arguing that Kudzayi is the brains behind the anonymous Baba Jukwa Facebook page. Baba Jukwa troubled Zanu-PF and its officials before the elections by, among other things, “exposing” the party’s plot to rig elections and alleged corrupt activities by senior officials. Kudzayi is accused of using Baba Jukwa to galvanise a revolt against the government.

Last week, armed police raided Kudzayi’s offices and took away a number of items, among them his laptop and phone. He was arrested later. His brother, who is alleged to have helped him set up the Facebook page, was arrested on Wednesday.

A middle-level editor at Zimpapers – under which state-controlled newspapers fall – said it is highly unlikely that, even if Kudzayi is found not guilty, he will return to his position.

A senior Zanu-PF politburo source said Kudzayi’s arrest would have come as a surprise to Moyo, who thought he was off the hook after Mugabe publicly censored him for using the media to sow divisions in the party.

“The arrest, coming so soon after Moyo thought he had wriggled free, should have been a shock to him. The arrest is a warning to him and it has served to crank up the pressure,” the source said.

“After Kudzayi’s arrest, Moyo was forced to defend the action, saying it shows that there is rule of law in the country. I’m sure, though, deep down he is against the arrest.”

Despite working for Zanu-PF before the elections, Kudzayi’s appointment and the employment of several journalists from the private media at Zimpapers did not go down well with some senior government officials, especially after Zimpapers publications started exposing corruption and salary scandals in parastatals and government departments.

Complaints against Kudzayi’s stories
Mujuru publicly complained about the stories, suggesting they were designed to destroy the party from within. Media reports at the time also suggested that all those exposed for wrongdoing were allies of Mujuru.

“[Kudzayi’s] situation was worse in that, in the past, he had written several articles, which were very critical of Mugabe, but probably [what did it was] the article that hurt the first family [which said that Mugabe’s daughter, Bona, had been gang-raped before her wedding],” the source said.

Mugabe and senior party officials attacked Moyo over a number of issues at a politburo meeting on June 4, at which they questioned why people like Kudzayi had been appointed at Zimpapers, despite being previously hostile to Mugabe and Zanu-PF.

Moyo then requested a meeting with Mugabe at which he presented the president with a written response to the allegations party officials had raised. This included Kudzayi’s explanation of why he had joined Zanu-PF.

Kudzayi said that he launched the pro-Zanu-PF online personality Amai Jukwa to counter Baba Jukwa while he was living in the United Kingdom.

Amai Jukwa’s articles were published by Zimpapers and this, he said, attracted the interest of Zanu-PF’s information department, which invited him to work with them.

He said he returned to Zimbabwe in June 2013 and was tasked with producing Zanu-PF’s radio and television campaign material.

Reform on the cards as Zanu-PF shifts hardline stance