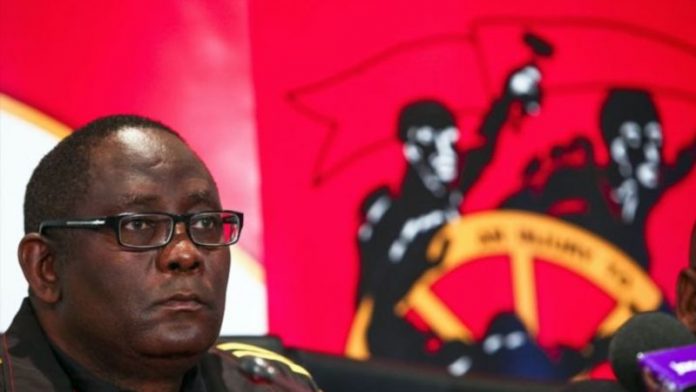 The thousands of strikers shouted “Vavi, Vavi!” and scrambled to shake hands with him outside the Metal and Engineering Industries Bargaining Council’s (MEIBC) offices in central Johannesburg.

Police and marshals had their hands full as marchers pushed each other aside trying to get to Vavi. Vavi is expected to address the workers and hand over a memorandum to MEIBC officials.

About 220 000 metalworkers began an indefinite strike on Tuesday for a double-digit wage increase. Marches were being held in Cape Town, George, Durban, Port Elizabeth, and East London.

“The NUM support Numsa in their fight to close the apartheid wage gap, fighting for equity in the workplace, and demanding a living wage … It is important for the working class to continue fighting for better salaries and better working conditions,” the NUM said in a statement.

Cosatu described Numsa’s demands as reasonable and called on its affiliates to back the strike.

“We agree with Numsa’s determination that they are not going to be intimidated by all those who represent the class interest of business and big capital,” Cosatu said in its statement.

The show of support comes as relations between Numsa, the NUM and Cosatu have endured strain.

In December 2013, Numsa threatened to withhold subscription fees from Cosatu as part of a campaign to get the union federation out of the tripartite alliance with the ruling ANC and the South African Communist Party.

Numsa’s support of Vavi
Numsa supported Cosatu general secretary Zwelinzima Vavi when he was suspended for having an affair with a junior employee at the federation’s headquarters.

“We will organise a march to Cosatu House to push the Cosatu leadership to accede to the clarion call for a special national congress and withdrawal of charges against [suspended] Cosatu general secretary,” Numsa general secretary Irvin Jim said at the time.

In April 2013, the NUM accused Numsa of poaching its members who worked at Eskom. The NUM reportedly wanted Cosatu’s central executive committee to ensure Numsa “returned” its members employed at the power utility. The NUM reportedly threatened to withhold its estimated R800 000 monthly subscription to Cosatu if it failed to intervene in its favour.

Thousands of Numsa members converged in Newtown on the first day of their strike, and workers in the metal and steel industries said they were ready to strike indefinitely, like their counterparts in the platinum mining sector.

“We can go on for months like the mineworkers … this is for our welfare and that of our children, and future generations too,” said one worker, Mapula Seale (48), during a protest in Newtown, Johannesburg. Wearing a Numsa T-shirt and a red bandana, Seale said employers in the country did not act until there was a full-blown strike.

“Workers in Marikana showed us that patience and resilience is needed to achieve what one is fighting for,” she said, referring to platinum mineworkers in the North West. Seale, a mother of three, works at a company in the engineering sector that supplies car ignition systems.

She was accompanied by Lorraine Mkhize, whose employer, a steel manufacturing company, supplies Eskom and Telkom with steel. She said she took home about R3 800 every month.

‘I am drowning‘
“I am drowning as I try to pay school fees and put food on the table. We want the 12%, and we are going nowhere until we get it,” Mkhize said.

They intended marching to the Metal Industries Bargaining Council offices in the city centre to hand over a memorandum of demands. Their counterparts in Cape Town, George, Durban, Port Elizabeth, and East London are holding similar protests.

Numsa, the majority union in the sector, wants a 12% salary increase, the scrapping of labour brokers, and a one-year bargaining agreement. A deadlock in negotiations led to a strike notice from Numsa, as well as the Chemical, Energy, Paper, Printing, Wood, and Allied Workers’ Union, and the General Industries Workers’ Union of South Africa. Employers have tabled a three-year wage settlement offer of between 7% and 8% for different levels of workers in the first year, and consumer price index-linked increases for 2015 and 2016. – Sapa