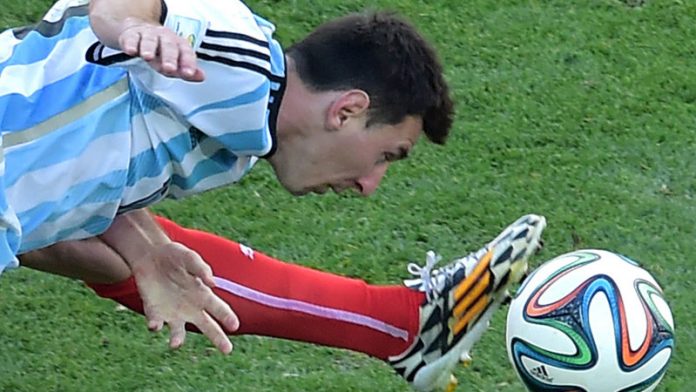 Messi set up the winner for Angel Di Maria two minutes from the end of extra-time to give the South Americans a 1-0 win against the Swiss.

The Argentines will now face Belgium in the quarterfinals in Brasilia on Saturday after they defeated the United States 2-1 after another extra-time duel.

A phenomenal goalkeeping performance from Tim Howard kept the Belgians at bay to leave the game scoreless after 90 minutes. But the introduction of England-based forward Romelu Lukaku tipped the game in Belgium’s favour.

The powerful Chelsea striker’s run set up the first for Kevin De Bruyne on 93 minutes, before he then latched on to a long ball and thumped an unstoppable shot past Howard for the second. That appeared to have settled the game but coach Jurgen Klinsmann’s Americans came roaring back.

A superb volleyed goal from 19-year-old substitute Julian Green on 107 minutes set up a frantic finale. Only a fantastic save by Thibaut Courtois denied Clint Dempsey what would have been a wonderfully worked equaliser from a quick free-kick as Belgium hung on.

“Obviously its a bummer for us ending on the losing side after a game of 120 minutes,” Klinsmann said. “We gave everything we could to the fans, it was a real drama, a thriller, we had enough possession to equalise at the end. But big compliments to Belgium and congratulations to them to move into the quarterfinals.”

Saving Argentina
The victory takes Belgium into their first World Cup quarterfinal for 28 years, when they reached the last four in Mexico only to be knocked out by Diego Maradona’s Argentina.

Earlier, Argentina captain Messi bagged his fourth man-of-the-match award in as many games after saving his team once more at São Paulo’s Corinthians Arena.

Di Maria’s strike in the 118th minute after a surging counter-attack launched by Messi settled a gritty duel just when penalties seemed a certainty. The result was cruel on Switzerland, who looked to have done enough to take the game to a shoot-out with a disciplined defensive display that Argentina rarely looked like threatening.

But with two minutes left, Swiss fullback Stephan Lichtsteiner was caught in possession near halfway. Messi accelerated clear, and after hurdling Fabian Schar’s attempt to bring him down, slipped a pass to Di Maria who swept the winner past Diego Benaglio.

Switzerland almost hit back with a dramatic equaliser but Blerim Dzemaili’s downward header cannoned off the foot of the upright. The ball rebounded off him and just past the post.

Nervous Messi
Messi later admitted his side had been affected by nerves as the tension of the occasion got to his team. “Suffering, suffering that’s what I felt, but now we know we can go through times like this,” said Messi. “Just like everyone else, I imagine, at times I was nervous because we couldn’t score a goal and any mistake would have put us out of the World Cup,” Messi said.

The victories for Argentina and Belgium meant that all eight winners of the first round groups reached the quarterfinals for the first time.

Off the pitch, convicted match-fixer Wilson Raj Perumal denied any involvement in predicting the result of the Croatia-Cameroon group game, which is now being investigated by the African country’s federation.

Perumal said in a statement he made an “informal assessment” of the Croatia-Cameroon Group A game after the match. German magazine Der Spiegel, which reported Perumal’s comments, said he made them before the match. “At no time did I make reference to four goals being scored or to a red card being issued,” he said.

The game finished 4-0 and midfielder Alex Song was sent off in the first half. The Cameroon Football Federation says its ethics commission is investigating the allegations.

Fifa said it would not comment on the allegations because it did not want to influence the Cameroon inquiry. – AFP