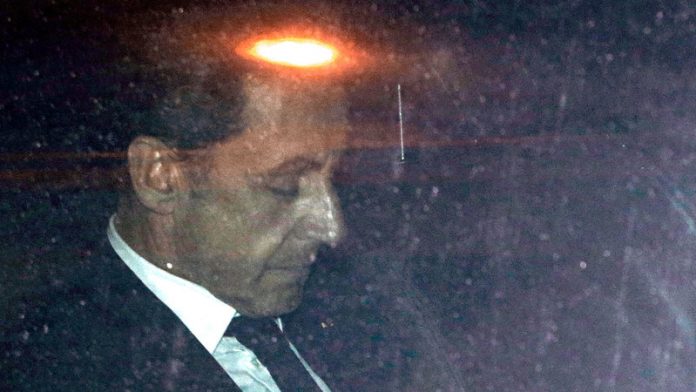 The decision came after Sarkozy was questioned for 15 hours, marking the first time a French ex-head of state had been taken into custody in a criminal investigation.

The right-wing leader had been detained at a police station in a Paris suburb over a suspected attempt to illegally influence judicial proceedings in one of a raft of colourful corruption cases he is implicated in.

After the lengthy questioning, the former president was taken in early Wednesday to appear before a judge, where he was “mis en examen” – put under formal investigation in what amounts to being charged, based on preliminary evidence – the prosecution said in a statement. He was then released while the investigation went ahead.

If convicted of the charges, Sarkozy could face a sentence of up to 10 years in prison.

“This situation is serious and the charges are serious … and furthermore they concern senior magistrates, a lawyer and a former president,” Prime Minister Manuel Valls said Wednesday. “The most important thing is for the judicial system to be able to work in a fully independent manner and peacefully and that the presumption of innocence is respected,” Valls said on BFM television.

‘It’s not us’
The prime minister denied suggestions that Sarkozy was being hounded by the Socialist government. “It’s not us who are asking these judges to launch investigations,” he said.

Sarkozy’s longtime lawyer Thierry Herzog and a magistrate, Gilbert Azibert – taken into custody a day earlier alongside another magistrate – were both charged with influence peddling in a late night court appearance, their respective lawyers said.

Investigators suspect Sarkozy tried to obtain inside information from one of the magistrates about confidential proceedings in an illegal election campaign financing case, and that he was tipped off by a senior figure when judges tapped his phones.

Sarkozy (59) has faced virtually non-stop legal battles since he left office following his defeat by Socialist candidate Francois Hollande in the 2012 presidential vote. He had been expected to attempt a political comeback in time for the next presidential poll in 2017, but those plans could be torpedoed after being charged in this case.

Sarkozy vehemently denies any wrongdoing, and his allies denounced what they see as a witch-hunt against their man.

“Never before has a former president been subjected to such treatment, such an unleashing of hate,” said Christian Estrosi, the mayor of Nice and an MP for Sarkozy’s UMP party.

After four fruitless months they discovered Sarkozy had a secret phone registered under an assumed name, and recordings from that device led to the opening of the influence peddling investigation.

At the root of the case are the allegations that Sarkozy was helped to victory in the 2007 election with up to €50-million from Gaddafi and envelopes stuffed with cash from France’s richest woman, L’Oreal heiress Liliane Bettencourt.

Sarkozy dismisses the Gaddafi claims as ridiculous in light of his leading role in the dictator’s 2011 overthrow, and he was acquitted last year of taking Bettencourt’s money.

The Gaddafi investigation is ongoing, as are several other cases in which Sarkozy has been implicated. They include a long-running probe into allegations he helped organise kickbacks from a Pakistan arms deal before becoming president.

2012 funding
In the last month, Sarkozy has also been linked to a scandal over the funding of his campaign for re-election in 2012. The leader of his UMP party was forced to resign after it emerged that €10-million spent in support of Sarkozy had been passed off as party expenses.

Sarkozy denies any knowledge or involvement in the apparent fraud, which is now subject to another criminal probe.

French judges have in recent years shown their readiness to go after former leaders with their successful pursuit of Sarkozy’s predecessor as president, Jacques Chirac.

Chirac was convicted in 2011 on corruption charges related to his time as mayor of Paris, but was excused from attending his trial because of ill health and was given a two-year suspended prison term. – AFP