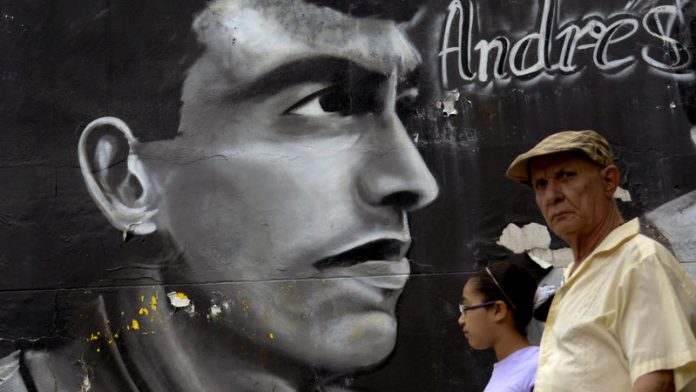 If Colombia had reached the World Cup quarterfinals 20 years ago the country might not have been dragged through its international shaming for the killing of World Cup defender Andrés Escobar.

Instead it will on Wednesday relive the trauma of Escobar’s gunning down in a Medellin discotheque car park on July 2 1994, 10 days after he scored an own goal in a World Cup group match against the United States. And it must get over the pain in time for the national team to play Brazil on Friday in its first appearance in a World Cup quarterfinal.

Escobar’s death has been widely blamed on the fury of Colombian drug lords at losing a gambling fortune because of the country’s World Cup exit. But there are many theories.

A Twitter campaign has been launched to honour Escobar ahead of Wednesday’s anniversary and Friday’s game. A flood of messages from around the world have been left, particularly after Colombia beat Uruguay to reach the quarterfinals.

“We hope you enjoyed the match up there #AndresEscobar! The dream and your team are still alive,” said one.

Homage
In Medellin, where 80 000 people turned out for his funeral and there is already an Escobar statue, a special ceremony will be held on Wednesday.

The World Cup city of Rio de Janeiro will also pay homage with the streetfootballworld network of organisations holding its commemoration at a museum.

Escobar (27) had played 50 times for his country and was a stalwart with Atletico Nacional when he was killed. He had also played with Young Boys Berne in Switzerland and the World Cup in the United States was his second after being in the squad in Italy four years earlier.

In 1994, the South Americans, led by the mercurial Carlos Valderrama, lost their opening match to Romania. In their second match against the World Cup hosts, Escobar inadvertently steered a cross into his own net. Colombia were dumped out though they beat Switzerland 2-0 in their final group game.

Ten days later, Escobar went to a discotheque in Medellin, a city then in thrall to drug traffickers and with a homicide rate of 380 per 100 000 inhabitants. Escobar was harrangued about the own goal inside the bar. The argument continued in the car park outside. The footballer was gunned down with a dozen bullets shot by one of the group.

‘Gol’
Witnesses indicated that the killer shouted “gol” with each shot fired. The motive for the killing has never been clearly established however. It could have been the work of drugs dealers or paramilitaries who had bet on the match and lost money through Escobar’s mistake. Or it could have been the act of a disapppointed and deranged fan avenging the loss.

Escobar, a classy defender reputedly set for a second spell in Europe, was highly popular in his homeland. That was evident from the huge numbers who turned out for his funeral in Medellin, where they made clear their hatred of drug-fuelled violence.

Humberto Muñoz Castro, who had links to a powerful Colombian cartel, was arrested and confessed to the killing. There were reports he worked for shady characters who had bet on the team and lost heavily. Found guilty, Muñoz was handed a 43-year jail term reduced to 26 but served only 11 years and was released in 2005. – AFP