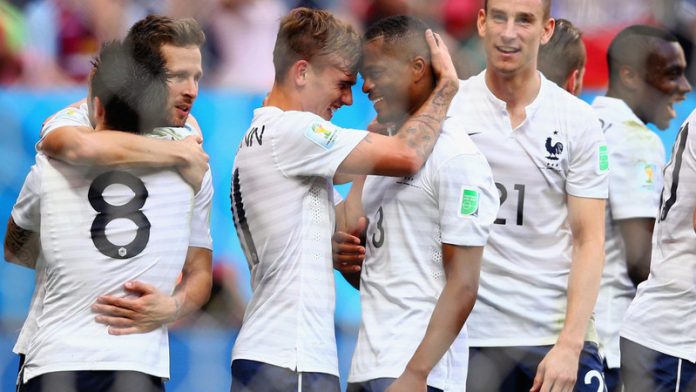 The footage belongs in the World Cup hall of infamy. Patrice Evra, hands tucked inside his pockets, stands on the pitch at France’s training base in Knysna, arguing with Robert Duverne, the fitness coach. Raymond Domenech, the France manger, steps in and holds back Duverne, who is furious. Evra heads in one direction and Duverne in the other, leaving Domenech reduced to the humiliating role of reading out a statement from the players explaining why they are boycotting training.

It was an extraordinary scene, one that was played out in front of the world’s media in South Africa and provoked outrage in France. Nicolas Anelka, the man at the centre of the dispute, received an 18-match ban from the French Football Federation. Evra, the captain and leader of the rebellion, was suspended for five games. The real punishment, though, was the damage to Evra’s reputation.

Lilian Thuram, a member of France’s 1998 World Cup winning team, argued that Evra should never be allowed to represent his country again. The French media piled in and the backlash, not surprisingly, was unforgiving.

“Evra has confused the function of the captain with the role of the leader of a gang,” wrote L’Equipe. “He has neither the dimension, the charisma or the aura to wear the armband.”

It could easily have been the end of him as an international footballer but Evra never entertained that thought and now he has his reward. Four years on from the South Africa debacle, Evra has lost the armband, as well as a yard or two of pace, but not his place in the France team.

Not the Evra of old
This is not, however, the Evra of old, as those who watched him at Old Trafford last season (and expect him to lose his place to Luke Shaw next term) will testify. The rampaging wing-back that Sir Alex Ferguson signed from Monaco eight years ago is no longer able to go through the gears, to the point that some in France consider Evra a weak link in Didier Deschamps’ reinvigorated team. Evra, though, has two things in his favour: experience and the total faith that Deschamps has in him.

Deschamps signed Evra for Monaco in 2002, made him vice-captain, worked with him for three seasons and came to admire the person as well as the player. Their relationship is tight; some close to the French camp go as far as to say that it is like father and son. Deschamps sees Evra as a leader, not a troublemaker.

In a crucial qualification game against Belarus last September, Evra delivered at half-time what Franck Ribery described as “a man’s speech”. Evra was one of the substitutes at the time and France were losing 1-0.

They ended up winning 4-2 and Evra was widely praised for his part in the turnaround. Afterwards, Noel Le Graet, the FFF president, went as far as to say that Evra is a “great man”.

Far more important to the 33-year-old is the respect he continues to command from the players. He does not need to be given the job of calling heads or tails before kick-off to speak with authority and make his voice heard. “The captain is Hugo Lloris. I am captain in my club and that’s enough for me, and to be confirmed on the left side for the France national team,” Evra said before the 5-2 win over Switzerland in Salvador. “I did not need the armband to do my work in the dressing room and on the field. It’s beautiful to be captain, it is honourable, but it is not the most important.”

Those comments were made at France’s training camp in Ribeirao Preto, where Evra addressed the media on international duty for the first time in two years. The subject of South Africa is largely considered off limits out here – Deschamps made that clear before the opening game against Honduras – but it is impossible to avoid what happened in 2010 when Evra is the man talking into the microphone.

Finding the mole
Evra recognised as much and his responses were well received. There was laughter when he spoke about his failure to find the “traitor” he accused of leaking the story about Anelka’s scathing half-time verbal assault on Domenech – “I was determined to find the mole … and I have still not found it!” – and respect when he acknowledged he had been far too consumed by the responsibility he carried in South Africa. “I took my role a little too much to heart and I was eaten,” Evra said.

Not that it was ever likely to break him. Born in Dakar and raised in a high-rise tower block in the south of Paris as the youngest of eight children, Evra is well versed in dealing with adversity. Little has been straightforward in his football career, going right back to the start when he travelled to Italy as a teenager and was in tears at a train station in Milan, after being unable to work out the connection he needed to get to Marsala, the Sicilian club he was joining.

Evra had done little travelling at the time, had next to no money and was unable to speak anything other than French. He was totally out of his comfort zone and would have given up and gone home but for his mother insisting he got a grip of the situation. He was preparing to sleep outside the station until a stranger offered him a mattress for the night and put him on the right train the next day.

Several years later, following a career-defining move to Old Trafford, Evra looked lost again, only this time on the pitch. When he made his debut for United in a 3-1 defeat at Manchester City in January 2006, Ferguson dragged his new signing off after 45 minutes. United were losing 2-0 at the time and Evra’s first appearance for the club had turned into a nightmare.

“A total disaster,” Ferguson writes in his autobiography. “You could see him thinking: ‘Why am I here?'”

Evra, as Ferguson goes on to note, settled at Old Trafford and developed into a “stellar acquisition” for United, with his impressive performances at club level eventually making him a regular for his country. He did not, however, make the 2006 World Cup squad and when the European Championship came around two years later, Evra found himself playing for what was in effect France’s second string against a team of amateurs in a pre-tournament friendly. “I came from winning the Champions League and I find myself playing against bakers!” Evra recalled laughing.

Eventually, though, he took over from Eric Abidal and his hold on the left-back spot at this World Cup was strengthened from the moment that Deschamps decided to leave Manchester City’s Gael Clichy at home and bring in the 20-year-old Lucas Digne, the talented but inexperienced Paris Saint-Germain defender, instead. Evra insists that he feels under pressure – “Didier Deschamps does not do gifts and that’s what I like … I know that with the slightest misstep I can be out of this team” – but his place in the starting XI feels nailed on in Brazil.

A World Cup quarterfinal will represent some turnaround for a player who sat on the bench for the last group game in South Africa, when France lost 2-1 against the host nation and returned home in disgrace. Evra immediately apologised for the training ground nonsense and kept his head down before reverting to type. “After my five-match ban, I tried to make myself small but it did not work,” he said. “When you have it in your blood, your nature returns quickly. I went back to being myself.” – © Guardian News & Media 2014