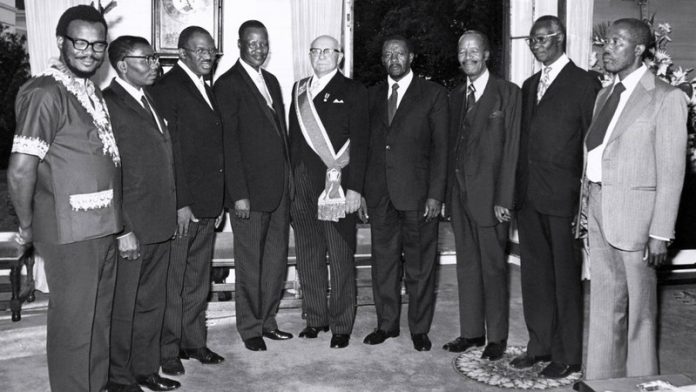 There is a joke in public service circles that goes something like this: “Have you heard what happened to South Africa after 1994? It was colonised by its Bantustans.”

The story is usually accompanied by wry laughs about South Africa’s new “colonialism of a special type”.

The story is funny precisely because it contains a kernel of truth. The Bantustans were far more substantial entities than simply “puppet regimes”, and one of the major features of post-apartheid South Africa is the degree to which the spatial and institutional legacies of Bantustans live on in contemporary South Africa.

The Bantustans, or “homelands”, as they were renamed in the attempt to foist ethnic nationalities on black South Africans, formally ceased to exist with the first democratic elections of 1994. Rooted in the 1913 native reserves, after the coming to power of the National Party in 1948 the Bantustans became one of the cornerstones of apartheid ideology and policy.

The Bantu Authorities Act of 1951   which was fiercely resisted by rural communities from Zeerust to Sekhukhuneland and Mpondoland   brought the remnants of the 19th-century independent African chieftaincies under the apartheid state’s administrative control.

Over the decades, these ethnically defined territories were granted self-governing and “independent” status by Pretoria, in effect stripping black South Africans of their citizenship. Economically dependent on Pretoria’s hand-outs and foreign loans, the Bantustans were large-scale projects of apartheid social engineering enforced by mass forced removals and resettlements.

The Bantustans were shunned by the mainstream of apartheid opposition domestically and internationally. They were regarded as illegitimate tribal governments and their leaders were rejected as puppets of the apartheid regime.

But after the 1994 electoral victory   and during the earlier negotiations period   the ANC and its allies were faced with the reality of having to reincorporate and accommodate the former Bantustans in the new democratic state. Hence their legacy remains inscribed in South Africa’s cultural, political, economic and physical landscape, though their historical importance has not been fully appreciated.

The homelands fostered the development of a black middle class and a black elite that had its base in traditional authorities. They expanded over the years to include an emerging bourgeoisie of farmers, businesspeople, teachers and, perhaps most importantly, bureaucrats. In many ways, it was a precursor of contemporary processes of class formation and capital accumulation in the broader context of a free-market capitalist economy, and there are significant continuities with post-1994 socioeconomic transformations.

The development corporations, set up to attract white South African and foreign businesses to the Bantustans in a bid to make them economically viable, played a significant role in developing this middle class.

Another pillar of the strategy was the handing over of white business to local black residents. In the former Transkei, where, prior to the granting of self-government in 1963, the nonagrarian economy had been driven by white traders and hotel owners, the Transkei Development Corporation stated its commitment to buying up white businesses and selling them, at a reduced price, to “Transkeians”.

In this sense, the Bantustans were incubators of black economic empowerment before its time.

But this was far from being a transparent process. Who businesses went to, and at what price, was usually determined by political connections and the patronage network of the Matanzima brothers, who ruled the Transkei.

By the end of the 1980s, a small but powerful black middle class had been built in the Bantustans. They had a large constituency of businesspeople, who often had ambivalent relationships with the Bantustan governments, but they were nonetheless their beneficiaries.

It is here that the origins of contemporary lifestyles of conspicuous consumption lie, rather than simply being the product of a new political regime of freedom that lifted apartheid’s restrictions on black consumption and acquisition.

The reconfiguration of homeland geographies after 1994, and their bureaucracies, also presented a public administration challenge to the new democratic state. The public service inherited by the post-apartheid state consisted of Bantustan officials on the one hand and white Afrikaans-speaking administrators loyal to the National Party on the other. Incorporating these administrations was a complicated task.

By the end of apartheid there were 10 Bantustans, with 14 legislatures, 151 departments and about 650?000 homeland officials. The houses of the tricameral parliament, the president’s council and the black and white local authorities all had to be merged with these Bantustan institutions to transform the state into a unitary set of administrations for the post-1994 national and provincial governments.

The difficulty of merging was most apparent at provincial level where, for example, in Limpopo, the provincial structures had to be overlaid on those of the old Venda, Gazankulu and Lebowa Bantustans and parts of the formerly white northern Transvaal.

From a capacity point of view, to run the country the ANC needed both black and white civil servants, but it also had to win their loyalty. Bureaucrats were a key component of the support base of Bantustan regimes and were influential in shaping the negotiations in the early 1990s   they demanded the protection of their jobs and pension packages. Their incorporation into the new administration at times carried with it a nontransformative element vis-à-vis the ANC’s mandate to achieve more democratic representation in the civil service after 1994, and often produced tensions.

Furthermore, Bantustan civil servants were the product of patrimonial institutions often embedded in clientelist relations that were able to morph and survive into the present.

As research by the Public Affairs Research Institute is beginning to show, more histories of the public service and its institutions need to be written in order to understand how these networks have shifted in the post-1994 period. Timothy Gibbs’s new book (See “A powerful elite traces its roots to bonds formed at mission schools”) offers one way into this complex set of issues.

As Gibbs argues, traditional leaders were a key part of these networks of power and authority in the Bantustans. Through these networks they were able to position themselves as regional brokers for the channelling of state resources to localities. This largely continues today, most evidently in the new ream of bills and laws dealing with traditional authorities, such as the contested (and for now buried) Traditional Courts Bill.

These have entrenched the institution of traditional leadership even deeper in rural landscapes, sometimes in conflict with the democratic rights enshrined in the Constitution.

Researchers at the Centre for Law, Race and Gender at the University of Cape Town have referred to this as the “reBantustanisation” or Balkanisation of rural society: the boundaries of the old homelands are being reinscribed. Increased powers are being given to traditional leaders, for instance by customary law provisions, which risk creating parallel legal systems for rural communities living under their jurisdiction and strengthening patriarchy while exacerbating gender inequalities.

New dynamics have emerged as to how traditional leaders engage with struggles for control over local economic resources, especially where mining rights are involved. In many cases, this has led to the revival of the ethnic affiliations that colonialism and apartheid sought to promote, which manifest themselves through renewed chieftaincy disputes and competing claims over land by different traditional communities.

We need concentrated and deep historical research to uncover the precursors to contemporary South Africa in a more systematic way. Only with these insights will we be able to understand our current state, the uneven performance of institutions, and how to move beyond the consequences of our complicated past.

This article arose from a workshop of the Public Affairs Research Institute, where Laura Phillips is a researcher, Arianna Lissoni is a postdoctoral fellow and Ivor Chipkin is the executive director

Letters to the editor: February 2 to February 8

Bop citizens tell of ‘days of plenty’ under Mangope

On Bop and the legacy of nostalgia