Life, the universe and everything 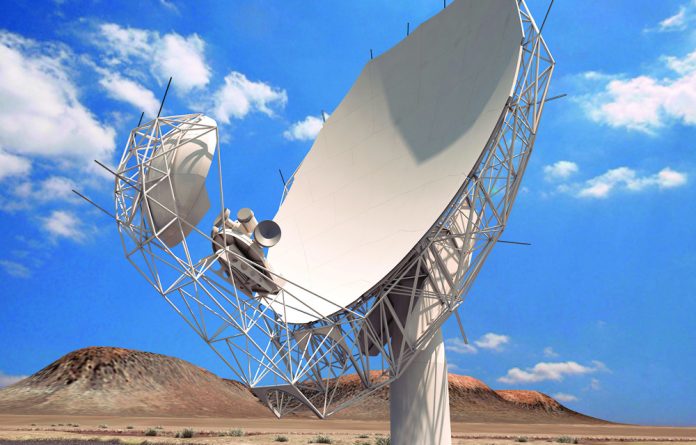 The SKA is the world’s largest astronomy experimental station, currently being built in South Africa and Australia. This giant radio telescope array will look deeper into the Universe and further back in time than any other telescope before it. South Africa is building a “pathfinder” telescope array called MeerKAT near Carnarvon in the Karoo that will eventually be incorporated into the SKA.

Professor Roy Maartens is the central cog around which one of the most ambitious scientific research projects revolves. He holds the SARChI SKA Chair in Cosmology at the University of the Western Cape (UWC) and is also the chairperson of the Cosmology Science Working Group of the international Square Kilometre Array (SKA) project.

“Cosmology is the study of the Universe as a whole – from its beginning moments up to today, nearly 14 billion years later, looking at how galaxies formed, how they cluster together in the complex ‘cosmic web’, and investigating why the expansion of the Universe is speeding up. This last phenomenon – the ‘accelerating Universe’ – is thought to be driven by ‘Dark Energy’, which is the energy of the vacuum,” Maartens explains.

The SKA and its pathfinders will provide the biggest ever maps of the distribution of galaxies in the Universe. “With these maps, we will be able to find out more about one of the greatest puzzles in modern physics – what is the nature of the Dark Energy that is forcing the Universe to expand faster and faster?

“Our model of the Universe is based on Einstein’s 1915 theory of General Relativity. This theory has been very successful in unlocking the secrets of the vast and ancient Universe. But perhaps Dark Energy does not exist – and, instead, the acceleration of the Universe signals a breakdown of Einstein’s theory on very large scales? The SKA, together with major surveys on optical telescopes, will help us to answer this question,” he says.

The students in his team learn skills and develop techniques that enable them to make predictions about what should be observed if our current model of the Universe is correct. They also learn how to compare the predictions from theory with the data that will come from the SKA. This will help us to understand more about the nature of Dark Energy and gravity. The skills and techniques that students learn involve the use of computers and sophisticated software. Many of these skills and techniques are applicable outside of cosmology. The SKA project itself will bring many spin-offs for computation and technology in South Africa, he says.

The drive to improve local skills and knowledge is also being pursued by Professor Sergio Colafrancesco at the University of the Witwatersrand (Wits). His SARChI SKA Chair in Radio Astronomy is the only one related to the SKA that is not based in the Western Cape and is seen as essential to transforming research activity in astrophysics and related science in South Africa.

The Chair already serves as an accumulation point of interest in astronomy and SKA-related activities for universities in the north of the country, with plans to use this momentum to create a viable and productive environment for cutting-edge research in radio astronomy and astrophysics, postgraduate training and undergraduate teaching.

Colafrancesco says he was attracted to South Africa by the SKA as a project that could help further his 15-year study of astrophysics and cosmology.

“This work has encompassed some of the most challenging questions in astrophysics such as the study of the nature of dark matter, the origin and evolution of magnetic fields, cosmic rays, the origins of the universe and the basic properties of some of the more fundamental particles/quanta in the universe,” he says.

Given the opportunities to further this study based on data from the SKA project (and its South African precursor, MeerKAT), he believes his Chair at Wits will enable his research group to explore new discoveries in astrophysics and cosmology. In turn, this will allow the university to become one of the leading international institutions in astrophysics and cosmology research in the coming decades.

“We do not want to just produce graduate and post-graduate students, we also want to produce students and researchers who will have the capacity to impact on a real scientific, technological and cultural transformation of the research and innovation capacity of the country,” he says.

The direct route to patient care