Tsvangirai: I am greatly misjudged 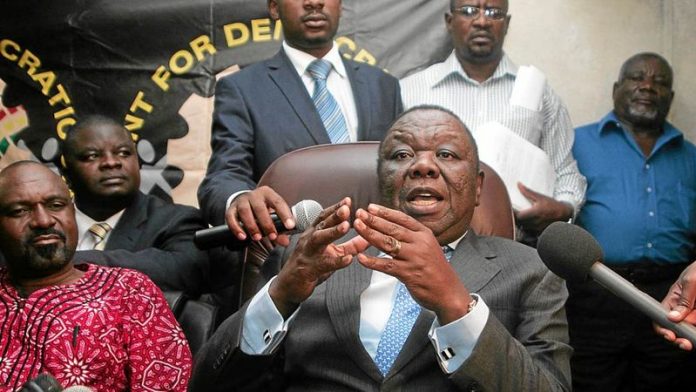 For any politician, trying to explain the sexual affairs they’ve been involved in is a difficult task. And now that former prime minister Morgan Tsvangirai has issued a ­public ­apology to try to explain his associations with various women, the feeling in some quarters is that it may have done him more harm than good.

Tsvangirai married Elizabeth Macheka in September 2012 following the death of his wife Susan Tsvangirai in 2009. In the run-up to last year’s July elections, however, he was linked to several women. These included South African-based Nosipho Shilubane, Loreta Nyathi – with whom he has a four-year-old son – and Harare businessperson Lorcadia Karimatsenga Tembo, to whom he reportedly paid $200 000 in damages after he allegedly withdrew a promise to marry her.

On Sunday at a rally in Bulawayo, Samuel Sipepa Nkomo, the interim chairperson of the breakaway MDC Renewal Team, alleged that Tsvangirai used the party’s campaign funds to pay some of the women.

In a document released this week, titled Personal Reflections, Tsvangirai said he was “a man greatly misunderstood”, adding that, as the leader of the MDC, and with a mandate derived directly from the people, it was his desire to drive the struggle to its logical conclusion.

Tsvangirai said he was saddened by the preoccupation with “false narratives” he claimed were meant to divert the country from the real problems facing the people.

“One such preoccupation is the pursuit of the issue of my assumed weakness with women,” said Tsvangirai. “After my wife died in an accident back in 2009, life has not been easy-going – that fateful day will not leave me. But despite sad experiences, life continues.

“As you all know, due to extensive publicity in the media with respect to my relationships with women, an attempt has been made to portray my perceived errors to be the sum total of who I am.

“I have fought for the proliferation of media in Zimbabwe, as I am a firm believer in the necessity of the checks and balances that the media provide.

“I have since moved on and now share a commitment with my wife, Elizabeth. I have taken ownership of my responsibilities, which I continue to meet within my resources.”

But critics were this week adamant that Tsvangirai’s apology was belated, pointing out that it came after the proverbial “horse had long bolted from the stable” – a reference to the breakaway from the MDC by the party’s former secretary ­general Tendai Biti and deputy treasurer Elton Mangoma.

Jacob Mafume, a former legal adviser to Tsvangirai who now acts as the spokesperson for Biti’s MDC Renewal Team, said the ­grouping had been vindicated by its decision to break ranks with Tsvangirai. Mafume said Tsvangirai’s Personal Reflections document was “self-incriminating”.

“His … document is clear that he failed to make critical decisions at a critical time. This is what is contained in the charge sheet expelling him from the MDC,” said Mafume.

“But it is unfortunate that he has the temerity to blame the death of his wife Susan for his errant behaviour. He used the mourning period to go wild. It is certainly not an excuse and unexpected of a leader who aspired to be president of Zimbabwe.”

“Tsvangirai should have said this, and whatever else he has reflected on, before last year’s July 31 poll. He took many things for granted. In politics one minute of a misstep can destroy a career built over decades.”

But others see the reflections differently, saying Tsvangirai has shown a rare quality in local politics – honesty.

Charles Hungwe, a Harare-based political analyst, warned that Tsvangirai was not out of the picture politically: “Despite the disdain … against his recent reflections, this may be his Damascus moment on his political journey that has been on the downturn. Given that he has come out in the open, he is effectively putting to rest all questions that have been raised as concerns in the areas he has opened up on.

“Confessions are rare to get from politicians, but Tsvangirai has attempted to be different and it can work for his personal rebranding purpose. This is politics and such events, though underplayed, can cause a huge twist in such a long- drawn-out political game.”

In the Personal Reflections document, Tsvangirai denied what he referred to as “the other false narrative” – that he wants to die in office. But he sounded a little like President Robert Mugabe, who constantly argues that he has no say over his prolonged stay in office as he is there by the will of the people.

“I have no intention of staying a day longer at the helm of the MDC without the people’s mandate,” said Tsvangirai. “But I will also pronounce, with the same vigour and vehemence, that I will not be hounded out undemocratically through a hostile takeover ­outside a people’s process called a party congress. We cannot be self-contradictory as to claim to be ­democrats when at the same time we want to remove elected leadership through a coup d’état.”