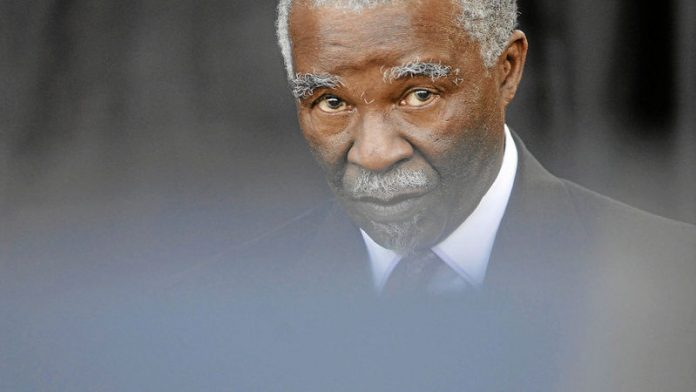 “First of all one has to ask the question: is he complicit? My answer [is stated] clearly in my book and in the statements that I have made subsequently, I would suggest yes.” – Andrew Feinstein.

It is probably not an unfair assumption that, in 1999 when the arms deal was signed under his watch, it would have been unthinkable to then-president Thabo Mbeki that he would be testifying in a judicial inquiry,15 years on. At the time, Mbeki appeared incredulous that the deal could be criticised at all.

Yet on Thursday that will be the case: Mbeki will be asked to defend his Cabinet’s decision to purchase arms in the early days of democracy, as he closes phase one of the arms procurement commission’s investigation into the notorious arms deal.

In an edited extract of The Dream Deferred, his biographer, Mark Gevisser, wrote that Mbeki “understood the risks [associated with the arms deal], but decided that they needed to be taken anyway”.

It would be one of Mbeki’s first actions as the second president of the new democratic order, if not the first. Former head of state Nelson Mandela had given Mbeki, as deputy president, the responsibility of overseeing the purchase of arms. Mbeki would go on to chair the Cabinet subcommittee that presided over nearly every controversial decision related to pricing, and the selection of the weaponry.

No corruption allegations
If the testimonies of former ministers Mosiuoa Lekota, Ronnie Kasrils and Trevor Manuel are anything to go by, Mbeki’s appearance will be brief. Questions will be limited to his role in making and implementing the policy groundwork that underpinned the decision to purchase arms, and his opinion on the affordability of the deal.

This is in line with phase one’s mandate: investigating the rationale behind the deal and the affordability of the purchases.

And, with the commission’s phase two hearings yet to kick off, there are no fraud or corruption allegations before the commission that could reasonably be put to Mbeki. So there probably won’t be questions about allegations that Mbeki himself received a bribe, and passed it on to Jacob Zuma and the ANC.

That is because official investigations into that bribery allegation, first reported in German press, were stopped and no one was ever charged. That is also because hard evidence of the bribes has never been presented, and so the commission is unlikely to have access to the allegations.

Even Andrew Feinstein, an arms deal critic and former ANC MP, said in 2008 that he did not think Mbeki was personally involved in corruption relating to the deal.

Feinstein’s position was that Mbeki ought to be held accountable for the decisions taken by the subcommittee, as well as for the scuppering of other investigations into the arms deal.

Mbeki faced allegations at the time of interfering in the work of Parliament and state bodies investigating the arms deal.

In a television appearance in 2001, Mbeki explained why he had excluded the Special Investigating Unit (SIU) from the multiagency probe into the arms deal.

Then, a letter – signed by Jacob Zuma – was written to the chairperson of the Standing Committee on Public Accounts, Gavin Woods, lambasting the committee for its findings about the arms deal and its recommendation to have the SIU included in a probe. It later emerged that the letter was written by Mbeki.

Feinstein is certainly not the only arms deal critic to credit Mbeki with the eventual partisanship of Scopa, of which Feinstein was a member.

According to Feinstein, Scopa grew less independent during its arms deal inquiry.

Decision to pick German bid
Mbeki denied the allegations of interference, and as investigating what happened to the other legs of inquiry is not within the terms of reference of Willie Seriti’s commission, it is unlikely to come up on Thursday.

But another allegation related to interference on Mbeki’s part could arise on Thursday: that he somehow influenced government’s decision to buy German corvettes above cheaper Spanish corvettes.

If he is asked about this, it will be the first time Mbeki has publicly accounted for the decision to side with the German bid.

Evidence from the commission so far also makes it clear that, at least on one occasion but probably more, Mbeki was briefed in great detail on the acquisition process.

It is possible that Mbeki could be asked about the minutes, and whether or not he agreed with the decision to purchase the more expensive weapons.

But ultimately, Mbeki will not be vilified for decisions that were taken under his watch. Instead, he is likely to be asked to account as a member of Cabinet, just like Manuel and Lekota before him. Until evidence is presented to provide a clear prima facie case against him, this is understandable.

As Gevisser noted in his extract: “To date, the most that can be said about Mbeki is that he must carry political responsibility for the arms deal and the extremely deleterious effect it has had on South African political life.”