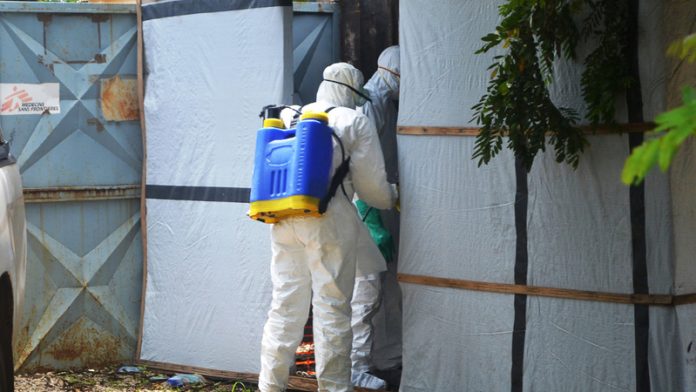 The death toll from the world’s worst ever Ebola outbreak in West Africa has risen to 603 since February, with at least 68 deaths reported from three countries in the region in the past week alone, the World Health Organisation (WHO) said on Tuesday.

The WHO said there were 85 new cases between July 8 and 12, highlighting continued high levels of transmission of the virus. International and local medics were struggling to gain access to communities as many people feared outsiders were spreading rather than fighting Ebola.

“It’s very difficult for us to get into communities where there is hostility to outsiders,” WHO spokesperson Dan Epstein told a news briefing in Geneva. “We still face rumours, and suspicion and hostility … People are isolated, they’re afraid, they’re scared.”

Sierra Leone recorded the highest number of deaths in the past week, which include confirmed, probable and suspected cases of Ebola, with 52. Liberia reported 13 and Guinea 3, according to WHO figures.

Epstein said the main focus in the three countries is tracing people who have been exposed to others with Ebola and monitoring them for the 21-day incubation period to see if they had been infected.

“It’s probably going to be several months before we are able to get a grip on this epidemic,” Epstein said.

Early cases
Ebola causes fever, vomiting, bleeding and diarrhoea and was first detected in then Zaire, now the Democratic Republic of Congo, in the mid-1970s. Spread through contact with the blood and body fluids of infected people or animals, it is one of the world’s deadliest viruses, killing up to 90% of those infected.

Speaking from Havana, WHO director general Margaret Chan called the outbreak the world’s worst ever by number of cases, saying: “The situation is serious but not out of control yet.”

The WHO was mobilising political, religious and local leaders in Sierra Leone, Liberia and Guinea to create a better welcome for medical professionals attempting to treat victims, Chan said, while co-ordinating responses from the three affected countries and eight neighbours that have seen Ebola cases within their borders.

“Sometimes, the challenge for us is that countries like to do disease control their way. But I think this is one such situation where countries must come together and adopt a similar approach to deal with a very dangerous disease,” Chan said.

The organisation was consulting with anthropologists to help suspend local customs such as eating bush meat or hugging and kissing Ebola victims at their funerals, which can transmit the disease, Chan said.

The outbreak started in Guinea’s remote southeast but has spread across the region’s porous borders despite aid workers scrambling to help some of the world’s weakest health systems tackle a deadly, infectious disease.

In Sierra Leone and Guinea, experts say scores of patients are being hidden as relatives and friends believe hospitalisation is a “death sentence”. In Liberia, health workers have been chased away by armed gangs. – Reuters