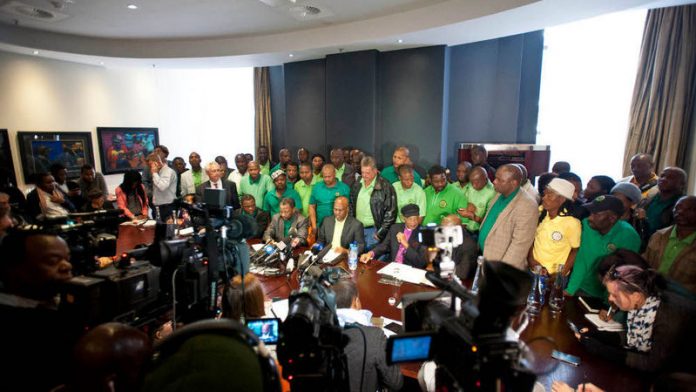 When a wildcat strike hit Impala Platinum’s Marula mine in South Africa’s Limpopo province this month, union leaders there had no idea it was coming.

“We were taken by surprise. We came to work that morning and everyone was outside saying they were not going to work,” said Solomon Digoro, deputy chairperson of the National Union of Mineworkers (NUM) at Marula, 280km north-east of Johannesburg.

He has a better idea of what might come next: a takeover by arch rival the Association of Mineworkers and Construction Union (Amcu), which looks set to expand after leading a five-month mine strike in the western half of South Africa’s platinum belt that pushed the continent’s most advanced economy into reverse in the first quarter.

The platinum belt, which resembles a pair of half moons separated by 250km of bush, houses the world’s richest deposits, so the strife is high on investors’ radar screens.

Amcu emerged as the dominant union on the western “moon” in 2012 after poaching tens of thousands of NUM members in a turf war in which dozens of people were killed.

On the eastern arm, a battle for supremacy now in its infancy appears to be following the same pattern.

Amcu has the momentum, its reputation cemented by the settlement it reached last month with Implats and rivals Anglo American Platinum and Lonmin that saw its members get annual pay hikes of up to 20%.

Pointedly, the 2 000 wildcat strikers who downed tools at Marula on July 3 said they wanted Amcu’s deal, in place of the 8% hikes NUM secured for them last year.

They returned to work the following week with a commitment from bosses to talk about their issues. NUM got the elbow.

“When it started, we went to the strikers, and our members said they did not want to talk to NUM. They wanted managers and they wanted the Rustenburg deal,” Digoro told Reuters in NUM’s cramped pre-fabricated offices at Marula.

Amcu national treasurer Jimmy Gama said the union had since met management, who agreed to start deducting Amcu union dues. For investors and the mining companies, it is worryingly like history repeating itself.

The manager, who asked not to be named, was referring to a wildcat strike by rock drill operators at Implats’ key Rustenburg mine on the western limb in early 2012. The stoppage ended with Amcu elbowing NUM out of the shafts.

At Marula, the last Implats operation where NUM is in the majority, Digoro and other shop stewards have also been threatened and said they lived in fear of their lives.

“We know we have been targeted because people in our communities have told us we need to watch out. We are all scared,” said an NUM shop steward who did not want to be named.

Amcu routinely denies allegations it uses violence and intimidation, but dozens of people have been killed in the union rivalry, and its rank and file often march, clubs in hand, in dramatic shows of force.

Virtually all Marula’s workers live in communities outside the mines, instead of company hostels, a situation Amcu has exploited before as it is far easier for a new union to recruit if the workforce is not corralled on mine property.

The communities, many of them informal settlements that have sprung up from the surrounding bush, lie next to each other, so if the Marula miners get a pay rise, the news will travel quickly through the bars and shops the miners use.

Just to the south lies the Modikwa mine, run by African Rainbow Minerals, where the workforce of 5 000 is 87% NUM – for now. NUM sources say Amcu is making headway north of Marula at Amplats’ Twickenham mine.

Amcu’s initial drive into the eastern limb was hugely successful two years ago when it dislodged NUM at the Everest mine run by Aquarius Platinum, only to see the company shut the operation – in part because of labour upheaval.

That closure temporarily thwarted Amcu’s push into the area, but since the Everest shutdown, industry attempts to mothball mines or cut jobs have been met with fierce resistance from Amcu and the African National Congress.

Consequently, any Amcu membership drive in the east is less likely to be crimped by shaft closures. Indeed, looming restructuring and job cuts in the industry are widely expected to be focused on the western limb.

Over 70 000 platinum miners are now Amcu members, while NUM numbers are close to 30 000, according to Reuters estimates. Renewed labour strife could affect up to 25% of global production after the recent Amcu strike halted 40%.

On the western limb, NUM still has majorities at a handful of operations, including those run by Northam Platinum and at Royal Bafokeng Platinum.

At the latter, NUM signed a five-year wage deal on Wednesday for increases of 7% and 10.5% on basic pay, with housing subsidies thrown into the mix. – Reuters