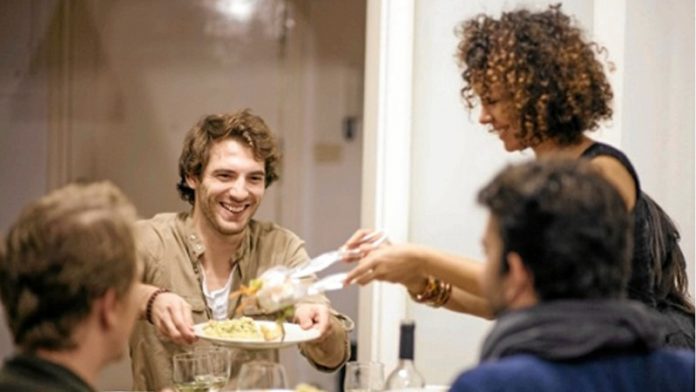 As I wander down a dark, narrow street in Gràcia, one of Barcelona’s northern neighbourhoods, I am not sure that I’m in the right place. Then I spot a strange scene that assures me I haven’t taken a wrong turn.

Through a townhouse’s wide glass doors, I spy six expectant-looking people sitting around a long table, while a man at the back is carefully arranging a row of plates on a makeshift bar.

“Is this EatWith?” I ask tentatively, but I already know the answer.

Dining in unusual places with people you’ve never met before is what Eatwith.com was invented for. The website is an online directory of supper clubs: anyone can apply to be a host, in their home or a venue of their choice, and anyone who pays a small fee can attend.

Founded in Tel Aviv, the site has had an incredible first year, expanding to feature 20 countries, including the United States, Japan,

Brazil and Italy. But it’s in Barcelona, the official launch city, that it is the most active, with an astonishing 200 hosts. And so this is where I come to give it a trial run.

Chocolate theme
Earlier, after logging in and browsing the options on the website, I’d found myself drawn to the idea of a chocolate-themed night. Although most events take place in people’s dining rooms, this one proves slightly different.

The ground floor of the house has been transformed into an events space by Miquel, a thirtysomething, self-taught artisan chocolatier. Whitewashed walls cocoon an interior that’s almost empty, bar a few well-sourced pieces of vintage furniture – an old fridge here, a hefty chest of drawers there.

The online description was a little vague, so I’m not sure what to expect. What I get is a remarkably imaginative, multicourse-tasting menu. First: a smooth chocolate fondant, covered in a lightly whipped carrot mousse. Next: tender ravioli, filled with lentils and chocolate, in a miso broth. It’s weird but it works. Both dishes are perfectly executed, attractively presented and surprisingly moreish. And the meal costs me just £13.

Miquel says EatWith – which takes 15% of what each guest pays – is serving him well as he tries to build up his business of making and, he hopes, exporting chocolates.

Although EatWith originally set out to target tourists, the biggest uptake in locations all over the world has come from locals. My fellow diners all live in Barcelona, despite originating from places as far-flung as Mexico, Sweden, Canada, France and Italy.

Two of them are EatWith hosts themselves: outgoing Andrea, the Italian, hosts pizza parties in his back garden, and Monica, a firecracker from Mexico City, holds Mexican/Syrian food nights, to reflect her own mixed heritage.

Unique selling point
Underpinning the site is an idea that everyone taking part in it should have some sort of unique selling point – be that the cuisine, the theme or the setting. To keep standards up, EatWith approves all its hosts, and those wanting to gain an additional “verified” badge can also be visited by an inspector, who will check their menu, venue and interpersonal skills.

Some would say supper clubs should be more of an underground network, operating without a middleman. But at least this site is taking responsibility and offering its hosts support and, in some places, informal training.

Over the course of my weekend, I try two other EatWith dinners to get an idea of the variety on offer. One night I find myself in a fully open-plan apartment belonging to Xabi, a professional chef who has worked in Michelin-starred restaurants. He was running supper clubs and cookery classes before EatWith but the site has given him a wider reach. He serves a six-course menu (£43 including wine), ably assisted by a grandmotherly type called Angels, who squeezes my arm as she sets down every dish: potato ravioli with truffle mayonnaise and rusinol (a local mushroom), and suquet (Catalan fish stew) with fennel confit.

My final meal is with a young couple, Vanessa and Renato, who offer a night of Catalan food in their one-bedroom apartment in the city centre. Here, we dig into delicious esqueixada de bacalla (salt cod with tomatoes, onions, olives and vinegar) and fideua, a Catalonian paella made with noodles.

Vanessa and Renato’s dinner is unlike the others because they join us to eat, rather than just serving the food. And, as there are just two other guests (both Barcelona residents), it feels like I’ve popped round to a friend’s house for dinner.– © Guardian News & Media 2014