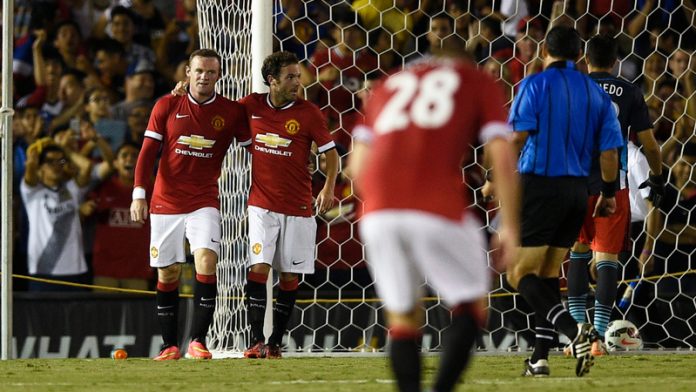 Van Gaal saw his new charges stroll to a 7-0 win over Los Angeles Galaxy in the English club’s opening pre-season friendly against the US team on Wednesday, having set United out in a 3-4-1-2 formation with Mata supporting the two strikers.

The 62-year-old coach used a similar formation with the Netherlands at the recent World Cup, where he guided his country to a third-place finish, and Mata says it could bring out the best in him.

“If I play behind the two strikers, it’s a good position,” the Spain international told BBC Sport.

“I can look for the ball, I can try to assist or score, so I will try my best. I will try to score as much as I can and try to help the team from that position.

“If I have to play on the wing I will try my best as well, but I feel comfortable in this role.”

Three-man defence
Only a handful of sides deployed a three-man defence in the Premier League last season and Mata feels it could give United an edge.

“It can be very dangerous for the opponent,” he said. “It is difficult for them to play against us in this formation.”

Van Gaal has made a strong impression since succeeding the sacked David Moyes, upbraiding his players during public training sessions and openly criticising the club’s heavy pre-season schedule.

Mata revealed that the Dutchman is making his presence felt in the changing room by forcing all of the club’s players to communicate only in English.

Mata added: “He is very good, on and off the pitch. He is a good man and a great manager … He has a lot of experience, he has won trophies in previous teams too, so it’s a good chance for me to learn from him and for us to improve as a team.

“He is demanding. He is very honest, straight, speaks with everyone to his face. I think this is good, a perfect way to do it: saying what you think about the players in front of them.” – AFP