Juju prances into the gaps left by ANC 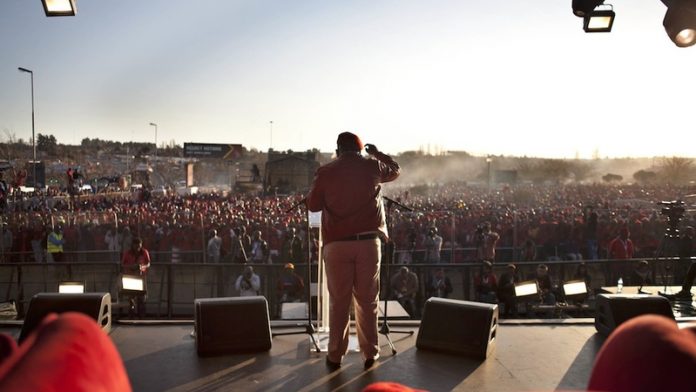 Julius Malema’s Economic Freedom Fighters is arguably the most intriguing, if controversial, political movement to emerge in the aftermath of apartheid. It has fired South Africa’s cultural imagination, attracted unprecedented levels of curiosity and raised high levels of expectation, while being subjected to enormous scrutiny.

But with its unsteady brand of parliamentary-cum-insurrectionary politics, there is no doubt it also represents a potential threat to the status quo. One only needs to indicate the hostility it has elicited and to the manner in which, from the official left to the established right and the ruling party in particular, its adversaries have attempted to stigmatise and delegitimise it.

In an attempt to reject wholesale the EFF project, they have turned Malema’s years of unscrupulousness over matters of public money into a weapon designed for an all-round assassination of his personality. Of late, a slanderous method has consisted in dubiously associating him with three forms of historical nightmares typical of the 20th century: fascism, Stalinism and Nazism.

From a purely tactical point of view, it is unlikely such abuse – or for that matter the harassment and physical intimidation of its representatives in provincial legislatures – will be enough to keep the EFF away from those who, tired of the ANC and the Democratic Alliance, are longing for a radical alternative to the status quo.

Vague moralism, haughty contempt or Pavlovian condemnations won’t suffice either. They are of no help to those who want to understand what the rise of this movement tells us about the state of our democracy.

It might well be that the EFF has concocted a “radical” political programme it has no hope or intention of realising. It might be that it has no real principles of its own and simply dresses itself in the ideological costume it thinks will be most attractive to the masses.

It might be that, if implemented, its proposed policies might merely suppress, without solving, the contradictions of “white monopoly capitalism”, which the party has identified as its primal enemy.

It might even be that in donning a pair of gumboots here, a workman’s overall and a domestic worker uniform there, or a beret and other pseudo-revolutionary adornments, and in decking itself out in half-baked theories, the EFF is simply simulating identification with the proletariat and, in the process, trying to con the poor. But this doesn’t necessarily turn it into a fascist organisation unless we now agree that fascism, Stalinism or Hitlerism are but vague and general terms of abuse.

A fascist scenario under current South African conditions is simply implausible. For the fascist hypothesis to be considered seriously, we need to have reached a stage when one section of the bourgeoisie is objectively at risk of fighting another.

The EFF will have to be turned into an armed anti-labour militia in the pay of big business with the task of terrorising the workers’ organisations. Its brand of anti-capitalism will have to take the form of a sham battle with international finance capital, which in its rhetoric will be given a Jewish flavour.

Subsidised by big business, the EFF will have to win mass support from the ruined middle classes. It will have to be on the verge of taking power by default rather than by revolutionary overthrow. Finally, the person of Malema will have to arouse religious exaltation, and mysticism will have to bind together the heterogeneous and conflicting social groups that follow the commander in chief. For the moment, none of these conditions have been met.

The real question is therefore not whether Malema is Hitler reincarnated and the EFF a riotous brand of black fascism. It is why such a movement has emerged now and in this form, and what its emergence tells us about our model of democracy. As this is a movement still in the making, to answer these questions requires greater nuance and precision than we have displayed so far.

The EFF is garnering support, including in sections of the black professional classes, for one single reason: the ANC is undergoing a profound crisis of hegemony. Because of its centrality in South African society and politics, a crisis in the ANC is de facto a crisis of South Africa’s democratic model.

Indeed, 20 years after the end of apartheid, many are those who no longer take democracy’s promises as self-evident. To delegitimise the ANC and the increasingly sterile narrative of the struggle it keeps peddling, the EFF wants to bring this state of disillusion to a crisis point through a series of small-scale and, at times, antagonistic confrontations.

By fostering a new wave of politicisation and radicalisation of ­subaltern classes and by escalating political contestation, it ultimately seeks to open an unprecedented ­historical phase marked by the possibility of insurrectionary events.

It is helped in this effort by three structural factors. The first is the ANC’s failure to break with the historical patterns of capitalist accumulation that heavily depended on racial subsidies for their sustainability. This failure partly explains why South African society is still racked by extreme levels of black poverty; the extraordinary hold that the idea of “economic freedom” has on black cultural imagination.

The second factor relates to the growing inequalities of income and wealth. The new extremes of inequality have initiated a vicious cycle that is now undermining democracy altogether. Because money is fast becoming the most fungible political resource, corruption is no longer just bribery. It is creeping rot.

Unlike during the times of the struggle, the people as a category no longer stand for an idea waiting to become an event. Under ANC rule, the category has been thoroughly depoliticised. The people have become a succession of numbers, countless services to be delivered by a clientelist state that treats its citizens as dependants.

The third factor – potentially the most explosive – has to do with the politics of property. Having failed to resolve the question of racialised property (of land and mines) in class terms, the ANC is now trying to fix it by reactivating the native question. In so doing, it runs the risk of engineering the kind of ethnic and tribal consciousness that has led to the disintegration of many an African postcolonial state. It has resuscitated the tribal borders created by the Bantu Authorities Act of 1951 to define the boundaries of communities.

Chiefly powers have been further entrenched in government policy (as evidenced by the Communal Land Rights Act of 2003, the Traditional Leadership and Governance Framework Act of 2004, and the recently drafted Traditional Courts Bill), paving the way for the consolidation of patriarchy in rural areas. Economic powers have been extended to traditional leaders.

In a number of instances, ownership of communal land has been transferred from the state to “communities” and traditional councils generally headed by chiefs (or traditional jurisdictions) whose role in customary law is recognised by the Constitution.

Indeed, new laws have tended to entrench apartheid versions of chiefly power. Traditional leaders might now be in a position to capture for their own benefit various profits from land sales, mining deals, development projects, restitution claims, and tourism and heritage ventures.

Meanwhile, the old mining industry is racked by instability and its future is clouded with uncertainty. Forced to mechanise and to reduce the size of labour, it is literally under siege. With few exceptions, communities have only minimally benefited from mining activities on land they own or that is contiguous with mining operations. Where payments of royalties, profits from various investments, joint ventures and share transactions have been the rule, new kinds of contestations and rivalries have emerged.

The EFF has fully grasped the dilemmas of the moment. It has understood that political equality without property is not only fragile, but also fictitious. It has also understood that, more than being a social fact, the people are primarily an active historical force; a force that acts in order to disrupt the order of things. And the EFF wants to be that movement that disrupts the order of things by giving the people a voice again. This new movement is therefore a dramatic manifestation of the structural incompleteness of South Africa’s democracy.

Insofar as it is both the symptom of a real distress and the expression of hope – however misplaced this might ultimately turn out to be – it is a populist movement in a classical Marxist sense. It is born out of a combination of political disillusion and a social disarray linked to the ANC’s failure to resolve the social question, which, in South Africa, remains that of racialised property.

As for the EFF itself, one of the many challenges it faces is how to translate the social dynamics briefly described above into a genuine political strategy. To relish biting the calves of those in power is but a start. In its attempt to radicalise the current crisis it faces a real choice: insurrection or the electoral path.

To keep straddling both sides as it is currently doing might well lead to its early demise. Instead it must actively create the ideological conditions for an eventual alliance of the forces of labour with the youth and other segments of the subaltern classes. Only such an alliance is likely to open the way for the emergence of a new, post-ANC historic bloc.

The advent of the EFF singularly complicates the institutional left’s political equation. For the left to emerge as a genuine counter-hegemonic force, it will have to forge a modus vivendi with the EFF. This will not happen if it does not get rid of its at times sectarian reflexes.

The ANC can still fend off the EFF’s threat. For this to happen it must wake up from its dogmatic slumber, a mixture of corruption and complacency, arrogance and intellectual vacuity. Twenty years after freedom, what can progressive government possibly mean? What would it take to complete the project of democracy? How do we make certain that power is obliged to render an account of itself?

The proper response to the EFF challenge is not to harass, intimidate, physically abuse or suppress this voice. It is to turn South Africa into a new, genuine laboratory of democratic experimentation.