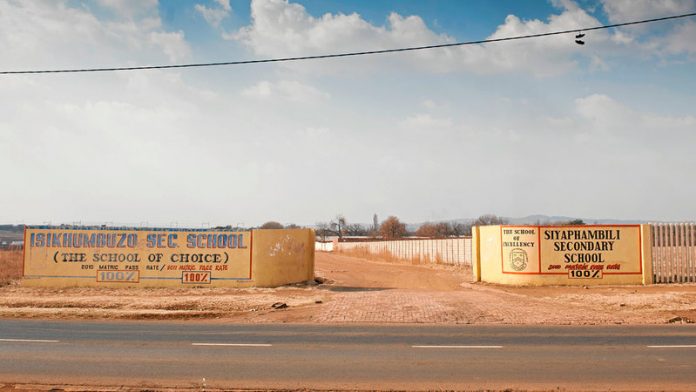 University engineering and commerce are among the many post-school study options closed to pupils from Ndwakazana Combined School in rural KwaZulu-Natal because they can only do maths literacy – not maths – in matric.

The simple reason is that the pupils have no choice: their school does not offer maths. This despite official policy introduced in 2006 stipulating that every pupil must write either maths (which universities do recognise) or the easier maths literacy (which they don’t) to matriculate.

“They’ve got limited [post-school] opportunities,” a staffer at the school told the Mail & Guardian this week. “Most of our pupils become nurses because we still do offer life science and they score high marks. Nursing is just about one of the few courses they can do. They don’t qualify for other spheres because they are not doing maths.”

Ndwakazana is one of 327 schools across the country offering only maths literacy in grade 12 this year. Most of them are poor public schools, and others are low-cost independent schools. Basic Education Minister Angie Motshekga revealed this figure last week while responding to parliamentary questions from the Democratic Alliance’s Annette Lovemore.

She said she “cannot indicate precisely the reasons for this circumstance [why the schools aren’t offering maths] … This matter will be investigated and the reasons will be provided when the investigation is completed.”

Major reasons
But the M&G this week ascertained at least two major reasons for why a number of public schools Motshekga listed as part of her 67-page response are not offering a subject that is a critical component in addressing the skills shortage in the country.

One reason is that some schools simply do not have the necessary teachers. The other is because some schools deliberately drop maths and offer only the much easier maths literacy in an effort to polish their matric results.

Insiders at some of the schools in KwaZulu-Natal, Limpopo and the Eastern Cape that Motshekga listed said they won’t get maths teachers because they have small pupil numbers.

At the centre of the schools’ plight is a controversial model the basic education department uses to decide the number of teachers allocated to each school.

Ndwakazana, located in a farm community in eMadlangeni, is a small school with a pupil population of just over 200. Based on the post-provisioning model, the school qualifies for eight teachers. This is despite the fact that it offers classes from grade one to matric.

Scarce skills
Pupils at the school stop doing maths and physical science in grade 10. They switch to maths literacy, which does not qualify matrics to apply for “scarce skills” courses at university.

Vera Frith, a senior lecturer at the University of Cape Town’s numeracy centre, said the disadvantage for pupils excluded from taking maths at school level is that they are “restricted” in what they can pursue at university. “They’d be limited to only the humanities, more or less.”

Sedibeng, a secondary school in Burgersfort, Limpopo, last had a matric maths teacher in 2010 – “but he was temporary”, explained an insider.

“Maths is one of the pillar subjects that can help pupils go further, but unfortunately we’re understaffed. Our pupil enrolment is low, so we can’t get more teachers.”

“Only seven” teachers are responsible for the school’s 254 pupils in grades eight to 12, the insider said.

Disadvantageous
He lambasted the model the state uses as “disadvantageous”: “They should come up with a model that especially helps small schools.”

Khatola High School in Bolobedu, Limpopo, has seven teachers and about 200 pupils. It “tried [keeping] a temporary teacher using the coffers of the school governing body, but it didn’t work”, an employee there said.

Alfred Giba Senior Secondary School in the Eastern Cape town of Peddie has bled teachers over the years as pupil numbers have dwindled. “The maths teacher was transferred because of [this],” said a school insider.

Achieving
As “the number of our pupils decreases, we lose teachers. Now Alfred Giba can’t offer maths and science. It’s not right, because there are pupils capable of achieving in these subjects.”

Thembinkosi Vilakazi, a grade 11 pupil at Isikhumbuzo, a low-cost independent school in Gauteng’s Orange Farm township that is also included on Motshekga’s list, said it isn’t fair that they are not offered maths.

“Maths gives you lots of opportunities for university and finding a job when you finish matric.”

Friends Lucky Motshwane and Godfrey Mahlakola, also pupils at Isikhumbuzo, complicated the picture by saying that, even if there were a maths teacher at their school, they would still take maths literacy.

Said Motshwane: “I know maths is important, especially for going to university. But maths beat me, so I would rather do maths literacy.”

The M&G also ascertained this week that some public schools on Motshekga’s list have dropped maths because of poor matric performances. This is the case at Mgcawezulu Senior Secondary School in Zwelitsha, in the Eastern Cape. An insider said: “After eight years of no improvement, we decided to go for maths literacy. The pass rate in maths was so bad that only one child would do well.”

Compounding the national problem is that enrolments for maths have been plummeting – from 263 000 in 2010 to a little more than half that number last year.

The basic education department had not responded to questions posed to it at the time of going to print.

“Obviously, a school that does not offer matric maths is really limiting the career choices of their learners,” said Lynn Bowie, a former lecturer in mathematics education at the University of the Witwatersrand and now maths co-ordinator at a Diepsloot-based nongovernmental organisation called Olico.

“However, at the same time, if you look at the pass rates and the quality of the passes in mathematics in grade 12 at a number of schools around the country, they are utterly dismal and thus the opportunities for the learners at those schools are not much better.

“It is, of course, vital that we find out why there are 327 schools not offering mathematics as a subject in grade 12. The department should know why this is so and should have some strategy in hand to deal with the issues.”Some schools drop maths and offer only the much easier maths literacy in an effort to polish their matric results