Trees for Zambia: Greenpop branches out 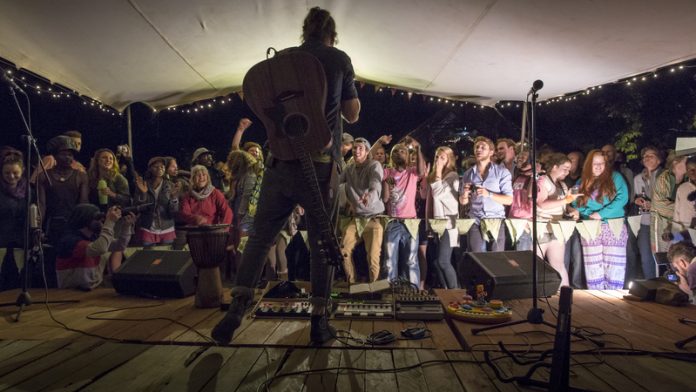 “Look at these trees that have been cut. You can see some of the sap or liquid that comes out there, it looks almost like blood,” says Ben Mibenge, Greenpop’s Zambian director of trees.

“If you saw the man who was doing this and you stopped him and asked him, ‘do you know the destruction you are doing here?’ He would say ‘yes I do’. But this is food for his children. For his family. And they must eat,” says the grandfatherly cult figure in environmental conservation in Zambia’s southern province.

We are standing in an elliptic semi-circle around an earthen mound as tall as a man and as long as a bus.

The freshly dug earth appears to rise up like the molehill of some mammoth subterranean beast, and thick, sulphurous smoke swirls lazily from stakes driven into the soil around its edges. This is a charcoal kiln and within its belly is a bolus of smouldering Zambezi teak, the logs hewn from a tree at least 150 years old.

The charcoal burners are desperate men, stuck in a cycle of penury and want, and the trees of the forest offer what seems to be the only opportunity to scrape together enough kwacha to feed and clothe their families.

No blame
Greenpop chief executive Misha Teasdale is swift to point out that the charcoal burners are not the enemy and his organisation is not here to blame them for a Zambian deforestation rate of about 300 000 hectares per year, and nor does Greenpop claim to have all the answers or solutions. Those have got to come from Zambians themselves. So why is Greenpop here?

Greenpop plants trees. That focus suggests that the work they and their volunteers do happens at ground level, with one’s hands in the dirt, or wrapped around a pick axe as one strikes into the crusty Zambian loam. And that’s true, but there’s also something else going on. Something far deeper and, arguably, much more important. “The tree is a metaphor for everything else that happens here,” said Matthew Koehorst, Greenpop’s head of department for planting and sustainability.

Alongside tree-planting initiatives at schools, hospitals, community gardens and even the local prison, Greenpop adopts a wider, systems-thinking strategy through the participation projects that run concurrently with their Trees for Zambia festival of action. This year, there were rocket-stove and solar cooker workshops, the construction of eco-brick benches by Candice Mostert’s Trash to Treasure and permaculture design courses. Greenpop also took the idea of voluntourism and participation in a new and interesting direction by inviting Colour Ikamva and the Ilizwi Photo Club to take part in the event.

Ilizwi was started by photographer Meghan Daniels, who at the age of 17 picked up her camera and ventured into Khayelitsha. This developed into Ilizwi, a project that works with young people in under-resourced communities by encouraging creative self-expression through photography. Ilizwi interviewed and began working with 12 young Zambians during Trees for Zambia, and after three weeks they held a jaw-dropping and emotional exhibition at Greenpop’s camp. There are now plans afoot for a permanent Ilizwi satellite project in the town.

Mural footprints
Colour Ikamva is facilitated by Megan King and Ricky Lee Gordon, a South African artist and arts activist who is known to Capetonians for his mural work and street art under the name Freddy Sam.

The two worked on a selection of beautiful murals at Libala Primary School but also, importantly, engaged directly with teachers and the school’s arts curriculum to leave a lasting footprint that will accompany the now vibrant and colourful walls of several classrooms.

Greenpop’s “making greening fun and popular” mantra is well known, and there was also an expansion in their Earth Fest, the music and cultural festival that takes place at Livingstone Guest Farm after the second week of planting. Indeed, after its humble beginnings last year, there are hopes that this festival could continue to grow into a significant feature on the region’s arts calendar.

“Over the last three years we’ve tried wherever possible to connect with various areas and levels of what’s happening culturally,” said Teasdale. “So arts, recycled arts, upcycled arts, curio arts, musical arts, everything from DJing to traditional song and dance – we’ve tried to bring it into what we do.

“There are so many amazing musicians in Africa that don’t get the opportunity to play on a stage, and while our stage is not a big one yet, it has the opportunity to be a big one. I definitely think this is an opportunity to grow something long term in Livingstone, with the right partnerships in place, and give people a good reason to talk about the environment and have fun doing it.”

“Earth Fest was really positive,” said an enthused Yanick Bathfield, singer and guitarist in Grassy Spark. “People were amped. It was also really well organised, and they’ve got a good sound system set up here. It really did the job.

“The one thing that I feel quite strongly from this week was that you hear about people doing environmental stuff, but you never really experience it. Well, I haven’t ever experienced it, I haven’t tried to. I believe in everything Greenpop believes in, but I’ve never been active in it. And so this was a great way to connect the two.”

This sort of connection, rather than just the simple act of putting trees in the ground, is at the nexus of Greenpop’s mission. Human connection, environmental activism, voluntourism and responsible business is a potent combination – if it’s done right – and there were several moments when this was clearly apparent at Trees for Zambia 2014.

Humble beginnings
After just four years, Greenpop has outgrown the bounds of its humble beginnings in Cape Town and in September yet another tree-planting festival will be added to its repertoire, this time in Hogsback in the Eastern Cape. With Loops’s career also taking off after the signing of a deal with a record label in New York, he’ll necessarily become less involved in Greenpop’s operations.

The abiding impression of Trees for Zambia 2014 was of a start-up project at the tipping point of sparking a social movement. Everyone I spoke to in Livingstone, from barmen to bank tellers and taxi drivers, has heard of them and what they do. The tangible effect they are having on people’s lives is perhaps best embodied in the example of Lloyd Maanyina.

Maanyina was a charcoal burner until an epiphanic conversion set him on the path to change his life. Now he runs a plant nursery called Amazing Grace that focuses on indigenous trees, the story of which was documented by Cape Town-based Makhulu Productions and turned into an award-winning short film. No one buys more of his trees than Greenpop.

“Had it not been for Greenpop, I can’t think where I would be at this time,” said Maanyina. “For as long as they are coming here, we’ll be working together.” It is Maanyina’s life goal to plant as many trees as he cut down in five years of work at charcoal kilns, and he is wasting no time in achieving that aim.

Liam Brickhill planted 82 trees out of the 3 683 that were planted during Trees For Zambia. In the hopes of offsetting the carbon he used to get to Livingstone, he plans to plant many more in Cape Town, and elsewhere.