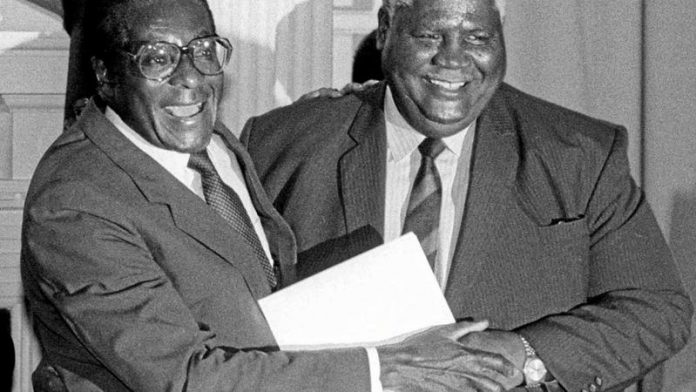 Former PF-Zapu party members are fighting over who will occupy the country’s vacant vice-presidency, a position reserved for one of their number.

In an interview, former PF-Zapu secretary general Cephas Msipa expressed concern that the scramble for power by senior officials could also result in former party members losing the key position of Zanu-PF national chairperson to one of their Zanu-PF colleagues.

The accord brought an end to the Gukurahundi massacres, in which more than 20 000 people died after the army’s specialised unit, the Fifth Brigade, was unleashed on Matabeleland and the Midlands provinces to deal with “dissidents”. The provinces were PF-Zapu strongholds.

At the time, Nkomo agreed to collapse his party, PF-Zapu, into Zanu-PF to stop the killings.

Although PF-Zapu was revived in 2008 by disgruntled former members led by Dumiso Dabengwa, some of its senior members refused to leave Zanu-PF.

The post will be filled at the Zanu-PF congress in December.

But, since the meeting, several former PF-Zapu officials have been jostling for the vice-presidency. Home Affairs minister Kembo Mohadi as well as former high ranking officials in Zipra Ambrose Mutinhiri and Phelekezela Mphoko are all jostling for the post. Mphoko says he was senior to Khaya-Moyo in PF-Zapu structures and has approached Mugabe directly to stake his claim.

Mphoko was a Zipra commander and Khaya-Moyo was Nkomo’s aide at the signing of the agreement.

“We held a meeting last year as PF-Zapu officials, which I chaired, and we recommended that Khaya-Moyo should get the vice-president’s position because we already have a precedence,” Msipa said. “As a matter of precedence, we also said we [PF-Zapu] should keep the national chairman’s position.”

Msipa is a former long-serving governor of the Midlands province.

Both Msika and John Nkomo were the national chairpersons of Zanu-PF before taking up the vice-presidency.

“Some of the people who were at the original meeting are now saying they also want the position. It seems people want power, so everybody wants to be elevated. Everyone wants a higher position, so what do I speak to the president about?

“We are singing from different hymn books, so I want people to calm down and decide what they want before I speak to the president,” Msipa said.

Contenders
Khaya-Moyo, who has the support of Mujuru, is still considered a favourite to land the position, given the precedents and Mugabe’s respect for seniority, but Mohadi could spring a surprise. He has the support of the Zanu-PF faction led by Justice Minister Emmerson Mnangagwa.

The fight for the position has spilled over into the media, with several senior officials, among them Msipa, politburo member Obert Mpofu, Matabeleland South provincial affairs minister Abednico Ncube, Matabeleland South chairperson Andrew Langa and influential war veterans’ leader Jabulani Sibanda, all saying Khaya-Moyo should get the position.

However, a group of former PF-Zapu leaders, led by one-time vice-presidential hopeful Naison Khutshwekhaya Ndlovu, who challenged John Nkomo before he got the position in 2009, say a decision will be taken at the congress in December.

Ndlovu was the PF-Zapu acting chairperson when the accord was signed and considers himself to be the most senior former PF-Zapu official in Zanu-PF.

National chairperson position
But, while former PF-Zapu members are fighting for the vice-presidency, their Zanu-PF colleagues are moving in on the national chairperson’s position. The Zanu-PF secretary for administration, Didymus Mutasa, in particular, is on a vigorous countrywide campaign for the position.

Some Zanu-PF officials are insisting that it has simply been a coincidence that former PF-Zapu members have been the national chairperson and it is not part of the accord.

Mutasa himself has said publicly that the position was never set aside officially for former PF-Zapu members during the Unity Accord negotiations.

This has drawn the ire of former PF-Zapu officials, among them the former information minister and Zanu-PF politburo member, Sikhanyiso Ndlovu.

Ndlovu insisted that, although it was not written in black and white, an unwritten agreement was reached by the parties.

But Mutasa’s statements were supported by the Zanu-PF spokesperson, Rugare Gumbo.

Msipa acknowledged that the scramble for power by former PF-Zapu officials could derail their bid to hold on to the national chairperson’s position.

“Naturally, if there are too many of you wanting one thing, collectively you stand to lose more,” he said.

Msika, who was the PF-Zapu deputy president, was the first Zanu-PF chairperson after the accord was signed.

When he became vice-president in 1999, following Joshua Nkomo’s death, John Nkomo took over as the national chairperson.

Msika died in 2009 and Nkomo became vice-president, and Khaya-Moyo took over as national chairperson.